The contract area of the NCSPCA covers an area of some 5600 square kilometres and includes the Kashagan field, currently in development, and the Kalamkas, Kashagan South West, Aktote and Kairan fields, all of which are in process of being appraised.

“As operator, NCOC is responsible for co-ordinating the activities of the consortium. This includes the consortium’s overarching business strategy, integrated planning of all project activities, managing geosciences, appraisals and future development work, and stakeholder engagement – particularly at the authority level,” Philippe continues.

Given the sheer size and technical complexity of the project, the Kashagan field is being developed in a series of phases. The first of these is known as the experimental programme, which was more than 80 per cent complete at the end of 2010. The second phase is in the early front end engineering and design process and further phases are currently under concept selection.

The first offshore oil and gas project in Kazakhstan, the development of the Kashagan field is occurring in harsh environmental conditions and represents a unique combination of technical and supply chain complexity. As Philippe reveals, “The combined safety, engineering, logistics and environmental challenges make it one of the largest and most complex industrial projects currently being developed anywhere in the world.” 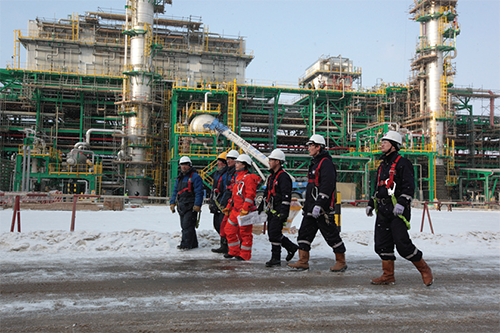 This massive undertaking made huge strides in 2010 as Philippe highlights: “A massive offshore installation programme occurred in 2010, with 28,000 tonnes of steel and equipment put in place though the performance of more than 100 heavy lifts, so all of the major components needed for first oil are now in place. As well as completing the bigger installations, hook up and commissioning work continuedto ramp up in 2010. It’s during this process that all of the different project parts are connected together and then tested to ensure that they function safely and efficiently as a single unit.”

By the end of 2010 some 6000 Kazakhstani workers were engaged in hook up and commissioning activities, displaying the hugely labour intensive task facing all the parties involved in the operation. In July 2010, Agip KCO’s well operations team safely passed a drilling depth of 200,000 metres, an impressive achievement for a team that has drilled more than 40 wells to-date. At the same time, work at the Bolashak onshore processing facility continued apace with the oil, gas and sulphur plant close to being mechanically complete at the turn of 2011.

Operating one of the world’s largest oil fields poses a number of challenges and difficulties, mostly as a result of the unique environment in the Caspian region. The shallow northern area, where NCOC operates, has a very low salinity, due to the in-flow of fresh water from the Volga River, and when combined with winter temperatures that fall below minus 30 degrees Celsius the region freezes for nearly five months of the year. Resulting ice drifts and ice scouring place big constraints on construction and production activities and call for novel technical solutions. This area of the Caspian also proves to be a difficult location to supply essential equipment to amplified by limited access to surrounding waterways obstructed by thick ice.

“The Kashagan reservoir is located some 4200 meters below the seabed, is highly pressured and the crude oil that it contains has high ‘sour gas’ content,” Philippe stresses. “Although exploration of high pressure, high sour gas reservoirs is not new, when compared to other sour gas fields around the world, Kashagan can be considered to be pushing industry frontiers, particularly when taking into account the harsh operating environment of the northern part of the Caspian Sea.”

The priority of NCOC remains the safe achievement of first commercial oil production from the Kashagan project. However, the consortium also remains focussed on selecting the best possible design for Kashagan Phase II. “Once selected in the latter half of 2011, the preferred design option will be presented to shareholders and the authority for approval. If the design option is approved, and budget is subsequently sanctioned, front end engineering and design will continue for Kashagan Phase II, in order to further refine cost, schedule and design,” Philippe indicates.

“NCOC and its agent companies are committed to developing a world-class project that is designed and operated to high environmental and safety standards, which maximises the socio-economic benefits and minimises any negative impacts,” Philippe enthuses. “In doing so, we believe that our activities offer a significant opportunity to develop the local and national economy of Kazakhstan in a sustainable manner.”