With generations of experience as a family in the operation of ocean going vessels, in 1984 four brothers; Hallvard, Harald Torbjørn, Knut, and Karsten Klepsvik, and their brother in law Aksel Økland came together to form North Sea Shipping (NSS).

“There was a downturn in the fishing industry and therefore we looked beyond this market to what we saw as a potential gap in the oil and gas industry,” remembers Hallvard, current CEO of NSS. “Of particular interest was the remotely operated vehicle (ROV) technology that enables vessels to perform subsea operations without divers.”

As such, NSS began life operating one of the first ROV/survey vessels on the North Sea – the ‘North Sea Surveyor’. This was followed in 1987 with the ‘North Sea Commander’ – a converted dive vessel, which in turn was one of the first
ROV/survey vessels with DP2 capability and diesel electric machinery used in the North Sea. Since this time, NSS has been dedicated to the ROV/survey segment of the market, but has also over the years moved into first seismic and inspection, repair and maintenance (IRM) vessels in 1997, cable laying in 2005, and offshore construction a few years earlier.

“NSS has always been a frontrunner in vessel innovation and technology, and as such began to focus on offshore construction vessels (OCV) from 2001 with the ‘Arbol Grande’, followed by the North Ocean series of larger offshore construction vessels along with the company Oceanteam. This experience was then developed further when we ordered the ‘North Sea Giant’ in 2008. Delivered in 2011, this is one of the most advanced OCVs in the world,” enthuses Hallvard. 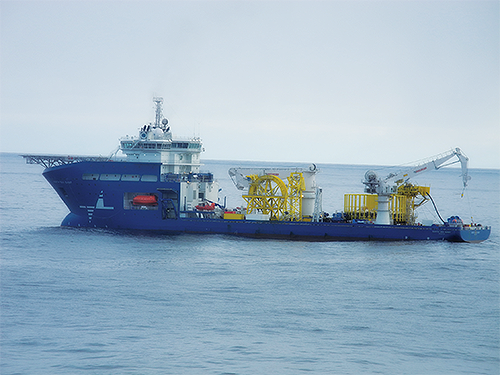 Today, NSS operates two vessels; the North Sea Giant and Atlantic Guardian, as well as owning, either fully or partially, a further eight vessels – seven of which work within the offshore segment. “These are highly advanced vessels and therefore require solid know-how and experience both from the office and the crew to operate in a safe and efficient manner,” describes Hallvard. “We have been a part of the development of the subsea market since the early 1980s, and as a leader in vessel technology for these types of ships we have obtained extensive experience in this kind of operation.”

In February the North Sea Giant was named ‘Ship of the Year 2012’ by the Offshore Support Journal – an achievement which Hallvard notes as helping underpin NSS’ work in the field: “This was a very good acknowledgement of all of the work that we laid down in the North Sea Giant. It proved that we have done many things right with the vessel, and succeeded in the outcome. We drew upon a lot of resources within the company as this was a very big project for us, both in financial terms and personnel skills.

“Currently, the North Sea Giant is on a long-term charter with Technip. This season Technip has also mobilised a flex-lay system onboard, which has enabled them to lay both flexipipe and umbilicals in the North Sea. Our first project of this type with the vessel was on the Goliath field, and we are currently laying two projects for Statoil at the Vigdis and Hyme fields. The North Sea Giant has performed very well since delivery, and we have built up an excellent co-operation with Technip enabling both parties to improve efficiency, quality and safety,” he continues.

The success of this relationship has seen Technip twice extend its option to charter the North Sea Giant for a longer period, and as such will retain the vessel until the end of 2015. During this time, amongst other projects, the North Sea Giant will be employed on the new Statoil gas compression installation at the Åsgard field in 2014. “This is a new technology which takes the first step towards a ‘fully underwater factory’ from which they can boost the pressure on the existing field.

This technology requires installation of large modules and also very high specifications for the vessel that will carry out the project, so this will really demonstrate The North Sea Giant’s capabilities,” notes Hallvard.

NSS’ performance with the North Sea Giant has also made it possible for the company to look at contracting a new-build OCV, as part of a long-term charter agreement with Technip, which will be built by the Bergen Group BMV AS. “We have taken six months to plan and design the vessel alongside Technip and the ship designer, Skipstekniske,” elaborates Hallvard. “The result is a handmade tool where Technip have been able to shape the ship in accordance with their operations, and NSS has taken the experience from the North Sea Giant and applied it to the technical aspects of the new-build. Specifically, the vessel will be tailor-made for deep water operations, whilst also taking into account the special requirements of the North Sea market.”

This agreement ties in well with NSS’ approach to growth, as the company recognises that the world markets remain too unstable for large vessel orders on speculation. Likewise, the capital intensive nature of the ships means that they need to remain operational, as opposed to lying idle, and therefore NSS is also cautious of the threat of outstripping demand through too many new-builds. The company does however see a strong need for subsea solutions that is unlikely to wane in the coming years, and therefore it is confident that its long dedication to the sectors of ROV and offshore construction will continue to pay dividends.