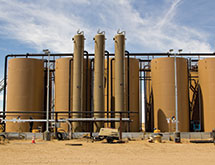 When Northern Electric Inc. (NEI) started operations in 1975, a modest portion of its work consisted of projects for oil and gas clients. But as activity in the Bakken formation has surged, the firm’s oil and gas business has grown with it.

The surge in the company’s business thanks to the Bakken has not been limited to the exploration sector, Ameiorsano explains. “They have been doing a lot of midstream and downstream work,” he adds.

Well Suited
A longtime veteran of the oil and gas industry, Ameiorsano joined NEI last year after working more than 26 years in the oil, gas and petrochemical industry, both on the client and consulting engineering sides.

As a non-union shop, NEI is well equipped to serve oil and gas clients, Ameiorsano says. “The company here has a great pool of industrial and electrical hands we can pull from at any time,” he says.

He praises his management team, which includes Executive Vice President Joe Dopler, and Jesse Sherwood, the field manager of the North Dakota division. “He runs all the crews for all the North Dakota projects,” Ameiorsano says.

Client Focused
The majority of the oil and gas division’s employees are at work on projects in North Dakota, Colorado, Pennsylvania, Ohio, Wyoming and Texas, Ameiorsano says. Its clients also include Samson Oil & Gas Ltd., Mesa Oil and Hess Corp., in addition to others.

“We also do all the fabrication for all their electrical houses,” he states. “E-houses are built in Colorado and we ship them to North Dakota.”

Stellar Safety
NEI’s oil and gas division has excelled when it comes to staying safe, Ameiorsano says. He credits this to the work of Director of Safety Kurt Fisher.

“He also implements a lot of onsite training,” Ameiorsano says, noting that employees receive training in procedures such as CPR. “Underneath his regime, it’s been a stellar program.”

It’s been so stellar, in fact, that the company has won multiple awards, including the 2013 ABC Contractor Merit Safety Award for outstanding safety performance. The company was one of five winners out of more than 200 others that were in the running.

A Rolling Machine
Keeping up with the Bakken region can be challenging for NEI, Ameiorsano admits. “The work environment up here on the oil and gas side is a consistent, rolling machine,” he says.

Often, the company has to provide services 24/7, he says. “That’s one of the biggest issues we deal with up here – maintaining that level,” he states.

“The region has boomed so fast and quick,” Ameiorsano continues. “To retain employees, we have to be up with the going rates and making sure all of our employees are satisfied.”

Keeping Busy
Ameiorsano sees a strong future for the oil and gas division. “It just continues to grow up there in Bakken with the well expansions going on,” he says.