Gas holders have been an iconic part of the British skyline since the nineteenth century, yet as modern natural gas networks now have the capacity to cope with demand, many of these towers have now become obsolete and a UK-wide programme to dismantle them is underway. Northern Gas Networks (NGN), whose area covers much of Yorkshire, the North East and northern Cumbria, initially had a network of circa 47 gas holders but is currently in the process of removing just under half of these between now and 2021.

A legacy from another time, the towers are often held in fond regard by local communities, who have strong attachments to them dating back decades. So the project is a fantastic opportunity to 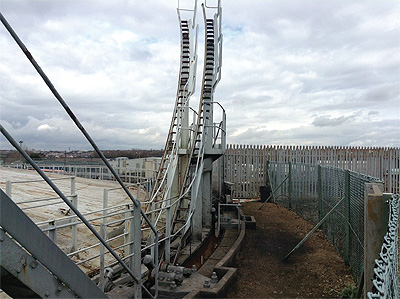 involve residents in commemorating the structures before they disappear from the nation’s skyline.

NGN’s community artist Mick Hand hosts workshops at nearby schools where children create giant murals of the holders, and residents can also share memories of them through a Gas Holder Memories social media campaign. This offers people a chance to talk about the towers, using the hashtag #gasholdermemories on Twitter and Facebook.

NGN’s Major Projects Team Lead, Mark Johnson, explains the challenges surrounding the removal of such structures and the company’s progress so far.

“Over the first three years we have taken down six gas holders, working closely with the local community and stakeholders to influence how we deliver our programme.”

In March 2016, the company began the dismantling of two above ground gas holder tanks in Howdon, Newcastle upon Tyne. Representing £680,000 of investment, the project is set to take 32 weeks. In April another major project followed to remove a single belowground tank at Ayres Quay, Sunderland. Only estimated to take 23 weeks, £500,000 has been invested into the project. Mark also notes that a third scheme will begin at the end of June in Leeds city centre.

Emptying the containers of potentially hazardous materials and removing tonnes of metal from structures that in some cases are over a century old is no mean feat, and NGN’s commitment to doing so in as safe and as environmentally friendly a way as possible is exemplary. “After making the site and the surrounding area operationally safe, one of the first challenges we have to overcome is making the sure the water sealed gas holders are emptied of their tank water and associated residuals,” Mark explains. “There is an element of water within the tanks that we have to discharge to foul. However, this is always accompanied by a layer of emulsion that also needs removing, so we pump all the water through a filtration system and then a methane stripper and associated equipment before discharging it.

“Throughout this process we have to monitor the water quality and gain consent from both the local water authority and the Environment Agency to ensure the discharge meets the correct standards. The next complex challenge comes in the form of a layer of sludge that has formed on the bottom of the tank and requires several stages of pumping before being removed separately as hazardous waste.”

The next stage involves following a detailed technical specification to dismantle the structure. “We begin by removing around 30 per cent of the tank’s crown to allow light and air into the tank so 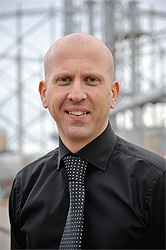 that specialist colleagues can work safely,” Mark continues. Once the cleaning phase is done we widen the openings to send in an excavator with snips to start dismantling each lift of the tank at a time, the resulting scrap metal is the also processed within the tank itself.”

During the dismantling phase numerous safety measures are taken and as with any major demolition project hazards need careful planning and control. Mark highlights that building strong relationships with local stakeholders is essential to alleviating significant concerns. Some of its sites, such as that at Howdon, can be placed in close proximity to live rail lines or residential properties, so engaging with local communities to ensure people understand the process, are aware of the safety measures being taken and that the contractors understand the potential impact their activities could have on them is a key part of NGN’s philosophy.

Such responsibility does not stop there. Keen to improve its de-construction and environmental understanding and to operate within the Considerate Constructors Scheme, NGN constantly monitors its inspection processes so that it can see exactly where scrap materials are headed. “We are legally required to be able to see exactly where, for instance, the tonnes of scrap metal are being recycled,” adds Mark. “We have also been able to support local contractors in utilising recycled aggregates from other projects to back-fill the voids left behind by removing belowground tanks.”

Working in close partnership with its contracting partners KDC and G O’Brien & Sons, NGN demonstrates an exemplary approach to conducting these works in a responsible manner. Mark sums up the overriding philosophy that continues to allow the team to achieve such success: “Our top priority first and foremost is safety,” he says. “Completing the work on time, within programme and on budget follows closely, as does ensuring we operate within the principles of the Considerate Constructors Scheme. At the heart of everything we do is ensuring that we’re true to NGN’s core values of working in partnership and engaging with our customers and local stakeholders throughout the process.”

Northern Gas Networks
Services: Responsible for operating and maintaining the gas network in the North of England