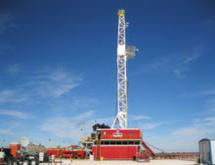 Since it was established in 2005 by President Jay Norton, Lubbock, Texas-based Norton Energy Drilling has grown significantly and established a reputation for integrity and reliability among oil and gas companies operating in northwest Texas. Although it technically is a new company, the Norton family has been drilling throughout the country for decades. In fact, Jay Norton is a third-generation driller. “My father rough-necked for his uncle, George Livermore, back in the late 1940s and early 1950s, so drilling has been in the family for a long time,” he notes.

Norton Energy Drilling is the predecessor of Norton Drilling Co., which was started by his father, Sherman Norton, in 1976. The company grew to operate rigs in Texas, Wyoming and New Mexico. It was acquired by UTI Drilling in 1999. When UTI merged with Patterson and decided to close down its Lubbock office in 2001, the Nortons left the company and started Norton Energy Drilling. They kept many of their same customers, which consist of small-to mid-sized oil and gas companies operating in the Permian Basin, such as XTO Energy.

Norton Energy Drilling put out its first rig in December 2005. Based on the demand for its services, the company will put out its fifth rig this June, according to Norton.

“We’re a small, privately owned drilling company that sticks to an area we know something about,” he says, adding that the company puts people first. “We provide a good, safe working environment for our employees and an excellent product for our customers.”

A Family Company
Based on its geographical location in the Permian Basin, Norton Energy Drilling typically drills to a mid-depth range of about 7,200 feet. It is capable of drilling horizontal wells, but its location lends itself to vertical drilling primarily. “That is not to say we couldn’t move a rig into another basin where horizontal is mainstay,” Norton remarks. “We have the equipment to do that. But, then again, that’s getting away from our core area.”

The company prefers to stay in the vicinity of the northern Permian Basin so that its employees can stay close to their families, he explains. “It makes it easier on them,” Norton says. “Drilling companies that are national in scope will work large geographical areas where they will do 12-hour tours or shifts, and work seven days on and seven days off. We work eight-hour tours so they can be home every night.”

Norton says he prides himself on running a family company and wants to make sure his employees understand that they are appreciated. “Here, they are a person with a name, not just a number within a large organization,” he says. “Any business you have – whether you’re drilling wells or making widgets – the most prized asset is going to be your people. You have to take care of your people and make sure they enjoy what they are doing and feel comfortable in their environment.”

Norton Energy Drilling strives to make its work environments as safe as possible, which is evident in its safety record. “We have four rigs currently running, and the ones that have been out running for more than a year all have at least a year without a lost-time incident, so we take it very seriously,” he says.

“Our safety director works with the crews individually. People have to be keenly aware of what’s going on around them, and communication is the key to it. If you are smart, diligent and take time to do safety inspections and make sure your guys are aware of where certain hazards are, you won’t have much of a problem. That’s the approach we’ve taken, and I think we’ve been successful.”

Meeting the Demand
Norton Energy Drilling felt the impact of the economic downturn in late 2008, when the price of oil was as low as $30 a barrel, Norton recalls. “The rig count plummeted in the first half of 2009, but it’s been on the up tick since mid-2009 and is now just hovering over $100 a barrel,” he says. “We’re extremely busy right now. I’m building a rig for a customer now that is due to go out in June. That rig already has an eight-well contract, and the other rigs are pretty much booked through the end of 2011.”

With the economy on the upswing, finding the equipment hasn’t been as much of a problem for Norton as finding qualified individuals to operate it.“Now with as much activity going on in the oilfield in the Permian Basin with the Wolfberry play, there’s a draining of experienced roughnecks,” he says. “When the economy is down, you’re able to find workers a little bit easier or at least people willing to set foot into this industry.”

But when the economy is up, he explains, those individuals might be more inclined to join other industries such as construction or manufacturing. Norton Energy Drilling has attended several job fairs in Texas and is educating soldiers returning from the war in Iraq about the benefits of joining the drilling industry.

“What it comes down to is we need someone who has a good work ethic and doesn’t mind putting in a full day’s work,” Norton says. “If you can do that, you have a good chance of succeeding in this industry. We’re putting out quite a few trainees now, but it will take them awhile to get their feet wet. We won’t put them in an entry-level position until we feel they can handle that position and do it in a safe and confident manner.

“That takes time,” he adds. “You can only grow as fast as you can grow your people. We put rig four out in the field last May, and we felt some growing pains for the first few months on that rig. It took a good six months to get everything lined out with people performing in an exceptional manner. And we will be experiencing those same growing pains when we put out our fifth rig in June.”

The organization hosts numerous conferences and training seminars, and provides a comprehensive network of technical-oriented print and electronic publications to continuously educate members about new techniques, and inform them about market conditions and events that affect the industry. Being a member of IADC offers Norton Energy Drilling invaluable networking opportunities, Norton says.

“It’s a wonderful organization,” he remarks. “You are able to have good communication with your fellow contractors. When you go to the meetings and get to know these guys, you realize they are not so much competitors but friends, so it helps from a networking standpoint. The organization also provides a lot of training in safety and leadership skills. It helps the industry stay abreast when it comes to legal issues, and it informs its members as to what’s happening in the rest of the country and around the world. That’s why I think IADC is so important – you have to see what’s happening within your industry, not just your area.” EMI