Norwegian Electric Systems (NES) was established in 2009, and formally commenced operations in 2010.

Although a relatively young company, it has grown out of more than 35 years of experience and knowledge within the electrical marine market. Today, NES has become recognised as an innovative, high-tech electrical company with a focus on diesel-electric and hybrid-electric systems for the global marine market.

With its in-house team having been involved in the development of over 4000 different electric systems it has a vision of becoming the global leader in diesel-electric and hybrid-electric systems. By achieving performance and producing innovative and reliable products that exceed customers’ expectations, NES has developed a reputation of having great flexibility, reliability, a friendly approach, delivering innovation and, importantly, product development.

Maintaining a committed approach to teamwork, the business has designed solutions that cover a wide market spectrum. In addition to the traditional market, the comprehensive diversity of products and systems opens up the markets for drill ships, semi-submersibles, conventional rigs, platforms, large tankers and cruise vessels amongst others. The company’s key technological development is the Quadro Drive® system, specially designed for ship installations and setting the standard for the next generation of propulsion converters.

The liquid-cooled four-quadrant drive has a power rating up to 5000kW making it suitable for the many industry wide applications. The active rectifier in the system creates the possibility of regenerating the energy from the propeller and shaft back to the grid, whilst the power factor is always in unity and equal to one, so the grid’s capability is fully utilised. The result is a flexible and dynamic propulsion system, focusing on a high performance energy chain from the diesel motor to the propeller’s thrust. 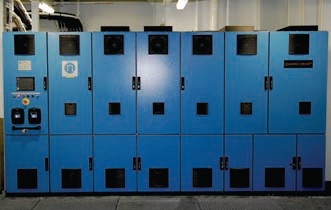 The modular based system allows for interchangeable parts and an option of de-rating the drive so should one module fail the vessel can avoid off-hire time. The arrangement of the electric propulsion system features a high level of reliability as each electric motor is supplied through its own Quadro Drive and associated control system. The reliability of the converters improves safety and the redundant main propulsion drive provides adequate power for the ship to operate if a malfunction occurs.

The company also provides a B.O.S.S.® (Black Out Safety System) that gives a fast torque reaction to avoid blackouts on the ship, and is aimed at meeting DP2 and DP3 class requirements. B.O.S.S. is designed to ensure that a single fault will not lead to an electrical blackout, which is a major safety issue in the offshore sector as the electrical reliance continues to become greater. The system analyses and reacts accordingly, preventing a development into black-out, whilst any number of generators can be operated in parallel up to full power without risk of black-outs or total loss of propulsion. The response time, from the moment of detecting a critical situation until the propulsion system performs load adaption, can be measured in milliseconds.

With research and development remaining fundamentally important to the organisation, it has in January 2014 announced the release of two new systems. Since 2010, from its R&D department in Bergen, Norway, NES has been working towards the completion of its two new QUEST® (Quadro Energy Storage Technology) systems. Bringing these systems to the market has been a plan since the Quadro Drive was first finalised, based on the company’s philosophy to prepare all its diesel electric and hybrid electric systems with add on modules.

The business undertook a study on the implementation on a DC-grid system but found it to be out-of-date and far too expensive, particularly with regard to installation. The study on the grid system was a reaction to the current emphasis to switch to DC grids and NES now continues work towards a low voltage system. Interests within this field of study have developed from many of the company’s customers requiring low voltage systems to operate in areas where there is no specialist high voltage support.

In the development of the new QUEST systems, the company can add many advantages to its Quadro Drive. The proven, leading diesel electric Quadro Drive system, has more than 18 systems already in operation and is regarded as having superb quality. Through its software development, NES was able to follow a few vessels to monitor fuel and power demand. With this background it had a solid base to calculate the average level of power and the necessary boosting power from the battery storage. (See illustration QUEST 1 and 2. Boosting in green and charging in red area of load/time level curve.)

Diesel-electric and hybrid-electric systems are capable of fuel savings between 15 and 55 per cent, and equal reduction in NOx and CO2. As well as being much more dynamic in operation the vessel benefits by reducing maintenance costs by up to 30 per cent. The QUEST 1 and 2 can deliver further savings of up to 15 per cent on fuel and with less demand for running multiple gen-sets, resulting in less running time for the diesel engine, saving maintenance costs. A very high reliability of the total system can be achieved with further reductions on NOx and CO2, with a 100 per cent secure emergency safety, and the QUEST operating safely in DP2 with a closed bus-tie.

The future developments of the product will see NES launch its new system for reduction of harbour power with five times less onboard necessity of power supply. The interest generated from the development of cutting-edge innovative solutions has seen NES increase its turn over since 2012 by more than 20 per cent and earnings before taxes and interest more than 30 per cent. Although the market has been low NES has managed to keep its global position, and has recognised noticeable activity growth in the jack-up sector.

As the trend towards diesel-electric and diesel-mechanical systems continues to grow, the future for NES is promising, with contracts already lined up extending into the next three year period. Aimed at achieving its goal of zero down-time for customers using NES equipment the company will continue to provide cost effective solutions for the servicing needs of the vessel during its lifetime.