Back to Profile Gallery > Ocean Installer

“Since the well-publicised downturn suffered by the oil and gas market that set in towards the end of 2014, we have taken several strategic decisions designed to respond to what has been a changing, and challenging market,” explains Steinar Riise, Chief Executive Officer of Ocean Installer. Headquartered in Stavanger, with offices in Aberdeen, Houston, Mexico City, Perth, Dubai 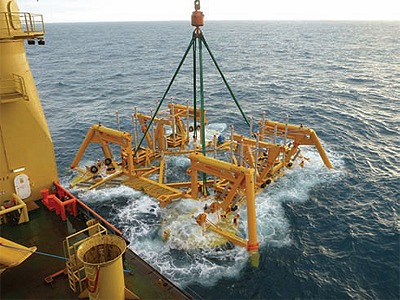 and Rio de Janeiro, Ocean Installer is a Norwegian subsea contractor, delivering full EPCI services within the area of marine and subsea operations.

“In the time since the downturn set in we have expanded our reach globally into new markets,” Steinar continues. “Such has been our success in doing so that our projections for 2017 suggest that more than half our total revenue for the year will have come from outside our traditional market of the Norwegian Continental Shelf (NCS). At the same time, we have also revised our asset strategy, becoming more focused on flexibility rather than long term charters. That has resulted in us becoming better equipped at taking on a broader range of jobs.”

A large part of the company’s strategy for expanding its reach has been its goal of establishing itself in key African markets. This has been an intensive task that has required a great deal of hard work, but is one that is already paying dividends. “We are currently working in West Africa, as well as in the Mediterranean,” Steinar states. “Our first major operation in West Africa following the creation of our regional office there involved deep water umbilicals, flowlines and risers (UFR) installation work with Total E&P Congo at the Moho Nord field off the coast of the Republic of Congo. A complex project, it included the installation and pre-commissioning of an umbilical, Multi- Phase Pump (MPP), flying leads and spools in water depths of up to 1000 metres. Utilising the highly-advanced CSV vessel, the Normand Vision from Solstad Offshore, which has worked on some of our most complex and challenging projects, we were able to execute the entire project, from project management, engineering and logistics, to the offshore installation work itself.”

Following on from this, and several other successful African projects, Ocean Installer is very pleased to have recently signed a contract for a subsea umbilicals, flowlines and risers (SURF) project 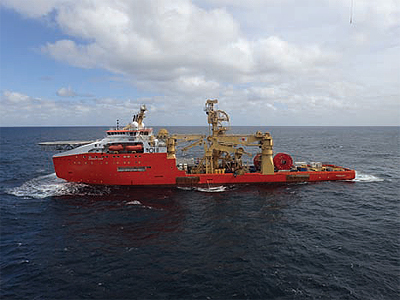 at the Al Jurf oil field, off the coast of Libya. Working for Mabruk Oil Operations, a joint venture between Total E&P and the National Oil Cooperation (NOC) of Libya, the work scope of this project encompasses the replacement of a ten-inch flexible flowline between a fixed drilling and production platform and a floating, production, storage and offloading unit, the Farwha FSPO. Project management will be handled by the company’s Stavanger office, with mobilisation and offshore operations scheduled to begin within the third or fourth quarter of 2017.

“With such contracts as those already mentioned we are continuing to showcase our global capabilities,” Steinar says. This was further evidenced in the awarding of the company’s first contract in Australia, which was announced in January 2017. This contract on the Ichtys field involves the installation of six flexible risers and ten flexible flowlines, as well as additional support work and further installation options. Ocean Installer is conducting its work as a subcontractor to McDermott International, which is responsible for the overall URF EPCI scope towards end-client Inpex. “We have long wanted to establish a presence within Australia and we are happy to be working with McDermott. As for our strategy for the Australian market, we believe cooperation of the type demonstrated here makes for a good way of establishing ourselves in the region, in what is still a fairly challenging market.”

Closer to home, Ocean Installer does continue to attract work from its longstanding partners, notably Statoil, which in July 2017 confirmed it had awarded the company a contract for subsea installations and tie-in operations on its Johan Sverdrup, Utgard and Bauge projects. A continuation of Statoil’s Marine Wave 1 programme, which Ocean Installer remains involved with, offshore operations relating to this latest contract will commence in 2019. While the company was certainly not immune to the immense challenges posed by the recent downturn in fortunes for the oil and gas industries, what Ocean Installer did during this time was view this uncertain period as representing an opportunity to change its focus, become more global and flexible, and ultimately gain market share.

“We are very much focused on establishing relationships to secure priority access to a diverse range of vessels through partnership agreements, something which has proven key to enabling us to bid on a range of projects, from fast track jobs to bigger, more complex jobs,” Steinar concludes. “Throughout the company’s existence our vision has remained the same and that is that we want to be a key service provider in the global SURF market. That ambition is as strong today as it has ever been and we feel very well equipped to succeed as we continue to work towards it.”