Back to Profile Gallery > Odfjell Drilling

With a strong foundation of competence supported by a rich engineering history, Odfjell Drilling Ltd. has earned a provenreputation as a trusted drilling and well service provider. Although the business was officially incorporated in 1973, its maritime roots reach back as far as 1914 and the company first began to gain experience within the petroleum industry during the mid 1960s. As such OdfjellDrilling has demonstrated an impressive ability to conduct successful drilling operations in some of the most demanding environments on the planet. “Odfjell Drilling has developed as an integrated drilling and well service provider with a strong position in the North Sea market,” elaborates senior vice president of communications, Gisle Johanson. “Over the years it has further developed an international presence with a fleet of six harsh-environment and ultra-deepwater drilling units, platform drilling, engineering and well services. The company was listed on the Oslo Stock Exchange in 2013.”

Building on over four decades of experience, Odfjell Drilling is dedicated to the services, expertise and exceptional quality that its customers require and today subdivides its service offering across three technologically advanced business units. These are comprised of its mobile offshore drilling units division; a drilling and technology unit and its well services division, all of which deliver genuine value and reliable results. “The company’s services are focused on offshore drilling and well services,” Gisle says. “The Odfjell Drilling service portfolio encompasses mobile offshore drilling units, platform drilling, engineering and project management services and well services. As such the company’s main clients are wellrespected blue chip exploration and production companies like BP; Statoil; BG Group; Shell, operating within the North Sea, Middle East, Africa and Brazil.”

To enable the business to effectively serve its clients in the field, Odfjell Drilling operates a fleet of semi-submersible rigs and drillships through its mobile offshore drilling units division, with units operating in both full and joint ownership. The latest addition to the Odfjell Drilling fleet is the enhanced GVA7500 harsh environment design, Deepsea Aberdeen semi-submersible rig. The sister ship to the Deepsea Atlantic and Deepsea Stavanger is designed for operations in harsh environments and at water depths of up to 3000 metres and was build by DSME yard in Korea. The Deepsea Aberdeen includes a state-of-the-art, highly efficient drilling system, which incorporates a dual derrick with a main and auxiliary work centre to facilitate a number of simultaneous operations. Furthermore its drilling system is equipped with dual active heave compensating drawworks, allowing for increased performance, 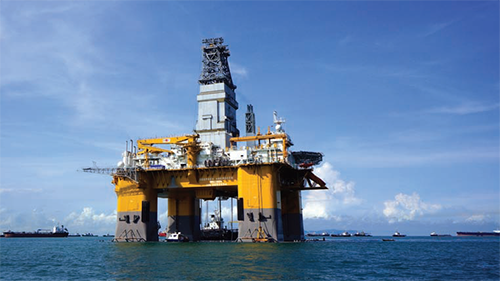 efficiency, safety and redundancy. The unit is designed to be able to operate globally and is highly suited to developmental drilling. Indeed all of Odfjell Drilling’s sixth generation semisubmersibles have a high degree of logistical independence, ensuring that they are custombuilt to deliver cost-effective operations in the world’s most challenging drilling environments, such as remote North Sea areas.

The Deepsea Aberdeen was completed in November 2014 and quickly found work with some of the world’s leading oil majors. During April 2015 the vessel commenced drilling operations under a seven-year contract with BP on the Quad 204 field development project, West of Shetland UK. “The start of drilling operations of Deepsea Aberdeen marks another step in the development of Odfjell Drilling’s activities in the UK and harsh environment offshore regions. The rig design is based on our more than 40 years’ experience of drilling in the North Sea,” comments Odfjell Drilling CEO, Simen Lieungh. “Our offshore crew and our onshore organisation in UK are looking forward to working collaboratively with BP over the next seven years on the Quad 204 development.”

Alongside the successful deployment of the Deepsea Aberdeen, Odfjell has enjoyed the award of prestigious contracts, despite the challenging market conditions experienced by the oil and gas market over the past 12 to 18 months. During February 2015 for example, it was announced that Odfjell Drilling had been awarded the Drilling engineering sub contract for the Johan Sverdrup drilling platform topside. Throughout the project Odfjell Drilling will represent one of Aibel’s major subcontractors for its engineering, procurement and construction (EPC) contract for the drilling platform topside for Johan Sverdrup in the Norwegian North Sea. The contract will run until 2018 and will involve around 50 Odfjell Drilling engineering professionals working on the project to various degrees. The contract itself has an estimated value of 100 million NOK.

The full project is being delivered to Statoil as operator of the Johan Sverdrup license. In all the project will involve in the region of 3000 associates at its peak and is estimated to run for three years. The handover of the completed platform topside is planned for the second quarter 2018, with a total value of the Johan Sverdrup project estimated at NOK eight billion.

Although Odfjell Drilling has enjoyed great success with the award of several high profile projects in recent months, the global market in the oil and gas industry remains challenging in the face of the falling oil price and reduced exploration and production operations. To ensure that the business is able to weather the storm, Odfjell Drilling will focus on its core competences to deliver efficient and costeffective operations. “The company’s main competitive force is in its integrated service portfolio, a strong operational experience and not least, its high QHSE standard, culture and performance,” Gisle concludes. “The top priority for Odfjell Drilling is to deliver safe and reliable services under the current market conditions and to reduce our cost base to stay competitive in a low margin market.”