Having been established in 2007 with the guiding aim of providing safe offshore access for personnel, Offshore Solutions BV’s current record of over 8800 connections and around 160,000 transfers without a single reportable safety incident indicates the company’s success in this aspiration.

Founded as a 50-50 joint venture between AMEC and Cofely Nederland, Offshore Solutions is a market leader in heave-compensated marine access systems as typified in its Offshore Access System (OAS).

Built around a walk-to-work concept, this patented heave-compensated walkway creates a robust physical connection between vessel and offshore structures, and then disengages all active systems. This means that the safe transfer of personnel is not then reliant on additional measures. The success of the OAS has led Offshore Solutions to develop a secondary connection type over the last year.

“In the past the system has required a landing platform, which has then been engaged using a pre-installed mechanical gripper head. We have since created a friction interface connection, known as the elephant’s foot, which retains all of the best features of the system in forming a mechanical connection but without the need to pre-modify the host platform we are connecting to,” enthuses Lindsay Young, managing director of Offshore Solutions.

The first commercial application of the elephant’s foot connection has been for a client in Qatar – a market that has proved hugely successful for the business over the last two years. “At that time we had made our first foray into the market with a contract with Shell on the Pearl GTL project, and now we’re in the process of finalising our fourth contract out there,” confirms Lindsay. “For the Pearl project Shell ordered a new build specialist vessel, which was also licensed as a chemical carrier, from a shipyard in China. Our unit was then shipped out and installed in the yard, before going to Qatar for sea trials and operation. 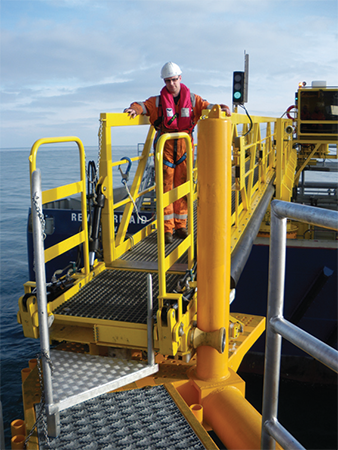 “This has been a very important showcase project for us in Qatar and from there the other contracts have followed. Shell Qatar has also been very supportive in speaking about the system benefits at marketing and marine access events, and allowing potential customers onboard the vessel to see the unit in action. Since we began work on the Pearl project we have also sold a unit to a Qatar oil company, which is using it with the elephant’s foot connection, and secured a contract with Dolphin,” he continues.

Unusually compared to Offshore Solutions’ other contracts, the unit installed on the Shell vessel is connected for long periods of time. In the North Sea for example, a vessel will make a connection to either collect or deliver personnel to the structure, and then disengage. On the Pearl project, the walkway is connected for extended periods from 12 to 24 hours, but Offshore Solutions has extended this even further on a trial basis up to 48 and 60 hours. As such, the system can work almost as a permanent connection, opening up new opportunities for customers that might require extended connection capabilities.

As well as the elephant’s foot connection, Offshore Solutions has also seen great success in the market with its freestanding conversion system. “In the past, one of the weaknesses of the system was the length of installation onto the vessel, which not only adds to the cost in terms of lease time but also in vessel downtime. In recognition of this, we have developed a freestanding skid mounted version of the system. This means we are now in a position to lift the unit onto a vessel and install it within 24 hours, which makes short-term hires much more feasible,” explains Lindsay.

Another market where Offshore Solutions continues to make headway is in the application of the OAS system on FPSO’s. In 2011, the company made history with the world’s first vessel-to-FPSO heave-compensated gangway personnel transfer for Shell’s Anasuria FPSO. Unlike connecting a vessel to an offshore structure where there is only one set of movement to accommodate, when connecting to an FPSO the challenge is compensating for both movements. Likewise, the height of FPSO’s can change greatly depending on if they are full or empty so Offshore Solutions has to deploy a purpose-built landing platform on the FPSO to ensure consistent connection.

“In the next five years we see the access systems becoming far more globally prevalent,” concludes Lindsay. “There’s an increasing level of interest in the walk-to-work concept, as customers realise that it doesn’t present them with the same challenges as other methods like helicopter transfer. We have already established a branch office in Qatar, and are strongly rooted as a business in the region, as well as the North Sea, but from next year will also begin to more seriously target West Africa as an area of significant potential.”