Back to Profile Gallery > OHT

OHT AS is a Norwegian oil service company operating vessels suitable for the dry transportation of offshore drilling rigs and offshore modules.

In September 2012, in connection with a restructuring of the OHT Group, Albatross Investering AS took over all the shares in the ship owning companies and OHT AS that were owned by Offshore Heavy Transport AS.

Dagfinn Thorsen, commercial director, explained that the business of the OHT Group will be unaffected by this restructuring. “The management company OHT AS remains unchanged and business goes on as usual,” he confirmed. “All chartering, engineering and operations are carried out by OHT AS through management agreements with the ship owners. Both the ship technical management and the crewing company are kept unchanged. In fact, the technical management company is, and has always been, part of the new owner’s business.”

Throughout the acquisition settling-in period, OHT has continued to execute a number of major heavy transport programmes including the towing of three rigs for Maersk. Dagfinn explained that these contracts were secured in summer 2012: “The transports themselves will happen in 2014 and 2015,” he added. “As these JU drilling rigs are the largest in the world 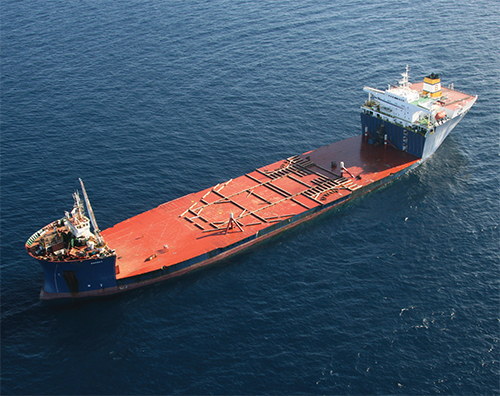 OHT is very proud of being awarded such contracts. It is our belief that we were successful due to the standard of our vessels and the shorter transit times we can offer. This was proved for the three large JU rigs OHT transported for Rowan Companies (ex-Skeie rigs) – these three rigs were also about 30,000 tonnes each, with leg lengths close to 200 metres. The transports from Singapore to Norway/Scotland had an average speed of 13 knots.”

Another very significant contract for OHT was with Soluciones Energeticas to move a buoyant tower from China to Peru. “This project is the first to involve a transverse mating operation (i.e. over the side of the vessel),” notes Dagfinn. “It was also quite complicated. First the vessel loaded the buoyant tower and the topside module (on a high support) by trailers (roll-on operation). Upon arrival in Peru the vessel ballasted down with a huge aft trim to float-off the buoyant tower, but still keep the topside module above water. The tower was ballasted to an upright position, towed to vessel’s side and secured to a pre-installed support on the vessel’s deck. Then the topside was skidded out over the shipside and the tower was deballasted to lift the weight off the vessel and the support. It was a very tricky operation – but all went well.”

OHT’s success at rig transportation has also seen it involved with the moving of five of the Ensco 8500-series rigs with great success. “The same story applies here as for the Rowan rigs – very good speed and basically no motion at all,” said Dagfinn. “We transported the Ensco 8501, 8502, 8503, 8505 and 8506 from Singapore to the US Gulf.”

He added: “OHT has also done, and will continue to do, transportation for Saipem and for Heerema. This involves huge modules (+/- 10,000 tonnes) for oil platforms in both West Africa and the North Sea. The plan is that the modules will be lifted off the vessel’s deck by the biggest crane vessels in the world.”

Offices in Pusan, Korea and an agent in Italy, as well as three offices that have been opened over the last two years in Houston, Shanghai and Singapore service customers such as those mentioned above. “The Houston office and the Singapore office are trying to achieve good relationships with all clients in their respective areas, and the Shanghai office needs a bit more time to get acquainted with the Chinese market before achieving its full potential but we expected that,” said Dagfinn.

These customers are used to certain standards, and Dagfinn believes that OHT’s focus on superlative service is what makes the company outstanding: “OHT is now the third largest heavy transportation company in the world and we focus on offering a full spectrum of service – we offer vessels with high speed, safe operations, and staff with the longest experience in this industry. We have decided to ensure that we always offer good crews and top quality maintenance of the vessels. In addition we do our utmost to arrive and load the cargo on time. Based on this we see that clients who have used OHT once often return, and over the last two years business has been relatively good for us.”

The restructuring of OHT in 2012 has set the company on a firm foundation for further growth, and as Dagfinn noted, OHT now has its sights set on renewing the fleet: “Our oldest vessels are 30 years old and even though they operate perfectly now they may need to be changed out in a few years. We will look at both new building and also conversion of other types of vessel to semi-submersible heavy lift vessels. The timing for such renewal is undecided, but it is definitely on the agenda for OHT,” he concluded.