On the road to growth

Founded on Canvey Island, on the North side of the Thames River estuary in 1936, Oikos Storage is today the only independently owned bulk liquid storage terminal, able to deliver products safely and securely into two of the UK’s key pipeline networks.

The company’s focus is on delivering its customers’ needs to the highest standard, while maintaining an unblemished track record in health, process safety and environmental practices.

“Since the day it first opened, the storage terminal has been running continuously, storing a wide range of hydrocarbons and chemicals,” states Colin Horton, managing director of Oikos Storage. “It was then in 2007 that Oikos Storage took the next big step in its evolution, when Australian financial services company Challenger acquired the business. A stock market listed company in its home country, Challenger has brought with it a very refreshing approach to sell the business to potential new customers in order to grow and develop Oikos Storage.”

The subsequent signing of several major contracts in the wake of Challenger’s takeover really lit the touch paper for Oikos Storage to embark on the first phase of a major development programme that it expects to help drive business for many more years to come: “This first phase alone has seen the company invest over £50 million and will go a long way towards making this one of the largest road and jet fuel terminal in the UK once complete,” Colin continues. “All the way through the process Challenger has been nothing but supportive, to the point where the terminal was permitted to go dark for an extended period of time in order to maintain its exemplary safety standards during the rebuilding process.

“What the company has done is rebuild 18 tanks and completely rebuild the bund. With clay matting creating a completely impervious under-base, the area has also seen the addition of very strong bund walls required by legislation, which are there to cope in the event of a catastrophic tank failure. These new features are in addition to advanced fire fighting systems that are now also being introduced. This will all lead into the second phase of the company’s redevelopment programme, which will involve the refurbishment of a 14 tank system, an undertaking that will cost in the region of £35 million.”

Two key components separate Oikos Storage from other players in its field of expertise. Firstly, it is the only independent bulk liquid storage company with connections to both the United Kingdom Oil Pipeline (UKOP) and the Government Pipeline and Storage System (GPSS) distribution networks. Furthermore, the company boasts a deepwater berth with a draft of 12.5 metres. What this means is that it can accommodate vessels of up to 60,000 tonnes dwt. 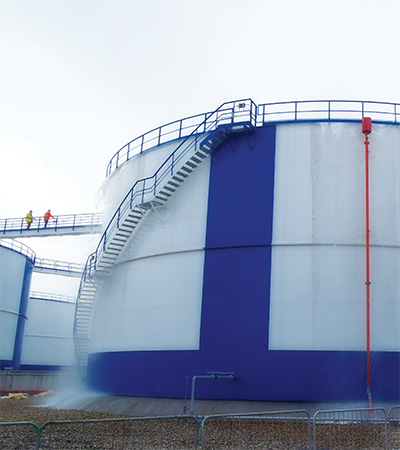 Oikos is also renowned for its excellent process safety record and its environmental awareness, qualities that have only intensified following its takeover: “Simply put, Challenger is an organisation that, like the vast majority of financial service companies, is risk adverse and as such have incredibly high standards,” Colin highlights. “To put this into context one only needs to go back to the fact that during the first refurbishment phase, Challenger allowed Oikos Storage to virtually shut the terminal down for nine months because of the safety implications that could arise during construction.”

Although the terminal does have a history of carrying out limited road loading operations, traditionally it has never committed much in the way of resources to this kind of activity The reason behind this is simply down to its location and the poor road access that came with it, which for years meant that to arrive at the facility tankers would have to pass through residential areas. This changed in December 2011 with the opening of a new, £18.5 million, dual carriageway road that now links Canvey Island to the UK trunk road system. This, and the other investments the UK government is making in the transportation network in the region, will soon give Oikos Storage the ability to conduct 24-hour road fuel loading operations.

“What the company is now doing, as part of the second phase of redevelopment, is looking to refurbish its road loading facilities to the highest possible standards,” Colin enthuses. “The Thames is notorious for having a limited number of road loading facilities and over the years this has had an impact on the road fuel distribution network in southern England. Oikos Storage now hopes to show in the months ahead that, with the right infrastructure in place, its facility will now offer a strong alternative for the major fuel companies and road fuel distributors.”

Having existed for the better part of eight decades, Oikos Storage’s terminal is a well known fixture of Canvey Island, yet for many years it has been widely regarded as somewhat of a sleeping giant, something Colin stresses the company wants to change: “Over the years this facility has pumped a huge amount of jet fuel into the pipeline systems, yet people still view it as just a Contango terminal. What the company wants to do going forward is make people more aware of its ability to deliver road fuels, jet fuels and marine bunkering fuels, while continuing to increase its range of services and operations.”

As it works to market its services to a wider number of potential customers, the company will be looking to continue the refurbishment and upgrading of its jetties, two of which are presently out of service: “A recent feasibility study conducted by the company is just the first part of its plan to bring the number two jetty back into service to accommodate ships of up to 25,000 tonnes dwt,” Colin says. “On top of this, a separate study is underway into modernising the South side of the terminal, which centers on being able to accommodate jet fuel deliveries from vessels up to 110,000 tonnes dwt.

“What this demonstrates is that, with 64 hectares of space at it disposal, there is no limit to what Oikos Storage will consider when it comes to developing its site. At the heart of any decision it has or will make is the customer and what they want from a company that has proved beyond any doubt that it is an expert when it comes to pumping liquids over many years.”