Oil States Skagit Smatco LLC operates as part of the wider Oil States Industries Group, which can trace its roots back to 1942 when it was founded as a supplier of rubber components and other products for the Texas oil patch.

During this time the group began to develop clutch and brake product lines, which would become precursors to its hugely successful ElastaFlex clutches that are now staple components in the marine, mining, paper and logging sectors. The Skagit Smatco division is a conglomeration of three companies that each brings unique experience and skill-sets to the group. The Skagit Smatco division maintains the Skagit and Smatco winch brands and also operates the former Applied Hydraulics group, which manages the company’s Nautilus range of marine cranes. Combining the strengths of each of these brands has given the group an impressive product portfolio and range of services, which has earned Oil States Skagit Smatco a reputation as a leading provider of bespoke solutions to a host of marine lifting applications.

The Smatco brand was established in 1948 as the Southern Machine and Tool Company. Based in Houma, Louisiana the development of the region’s offshore drilling industry led to the manufacture of Smatco’s first winch in 1967. Since then the company has developed a standard line of winches with models ranging from 10,000 to 1,320,000 pounds line pull. As it has progressed Smatco has expanded its product line to include low-pressure hydraulic drivenwinches, diesel engine powered winches, electric motor driven winches, combination drum/ traction winches, as well as storage reels, stern rollers, accessories and deck fairleads. Today, all Smatco winches are designed using a modular concept and are available with diesel, hydraulic and electrical power sources.

The group’s Nautilus cranes have been successfully installed in all parts of the world since 1985, catering for offshore drilling and production duty cycles on fixed and floating structures. Nautilus cranes are globally recognised for their quality and reliability. This reputation is founded on a bedrock of efficiency, safety and functionality, which is supported by a continuous development and design process. “We have been manufacturing these cranes since the 1980s, and have an installed base of thousands globally, but the designs continue to evolve and there have been many developments that have changed the way we build cranes,” begins Tim Reggio, director of sales & marketing for Oil States Skagit Smatco. 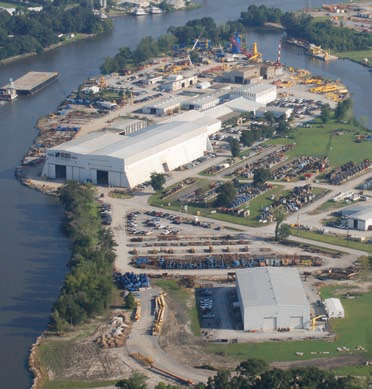 “Everything including the look and structure of the cranes has changed, so we are continuing to develop our cranes and design new models. For example, we are getting increasingly involved in the removal of older platforms from offshore oil fields, plus assisting the offshore wind farm industry with turbines being installed in various parts of the world today, which are larger and have a heavier tonnage, up to 500 tons and some of them work on what we call the cone design. What this means is that everything is contained within one central housing unit.

“The idea behind this is that all of the crane’s machinery and hydraulics are contained internally inside the crane. This way, it is protected from the weather and the crane itself has offers a smaller swing radius. When you combine the cone design with the advantage of the smaller swing radius, installation of this type of crane uses less valuable floor space on a jack-up, freeing deck for other functions.”

Since the early 1900’s Skagit Products has been involved in the construction of heavy-duty machinery for a variety of industries. It has a firmly established reputation as a leader in supplying and manufacturing deepwater mooring systems for offshore drilling vessels, pipelay and derrick barges as well as floating production systems. The brand offers windless, mooring winches, traction winches, traction winch/windless mooring units, conventional drum/windlass combination mooring units, construction vessel winches, jack-up winches, as well as hoists, underwater fairleads and deck fairleads/guide sheaves. While it offers a diverse range of products, the Skagit brand shares a belief with the division as a whole that each piece of equipment should be tailored to its customers’ needs. Tim elaborates: “We don’t build anything that we would call ‘cookie cutter,’ everything we build is a custom application. We get in at the early stages of the design studies and co-operate with engineering companies as early as possible so that when the product goes out to the market it has already been designed for that application.”

As it moves into the future Oil States Skagit Smatco anticipates significant growth. With it entering into what it identifies as ‘hot spots’ around the globe, it is safe to assume that the company will see even greater returns in the coming years. There are challenges facing the market but, as Tim concludes, Oil States Skagit Smatco is well placed to meet them: “When I think about our company, I think everybody is excited about what we are doing. We are keen to tell our customers that we are here and ready to work for them. We want to make sure that we take care of our people while at the same time giving customers excellent service and I think that we are doing just that.”