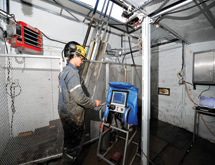 Orbit Garant, a Canadian-based driller that serves clients in Canada and internationally, has taken a bold step into the future.

The company explains that the computerized monitoring and control solutions that it is installing in its drill rigs result in improved accuracy and consistency of results, enabling experienced drillers to increase productivity significantly, while less experienced drillers can move faster along the learning curve compared to learning on conventional drill rigs.

“We think we have a game-changer on our hands,” President & CEO Eric Alexandre says. “The functionality [of] our computerized drills is best-in-class. The trend to full automation is the wave of the future in the drilling business.”

Among the 21st century features that Orbit Garant has designed into its computerized drill rigs are real-time visibility of drilling progress and core samples via the internet, and detailed performance reports on demand. One of the biggest benefits of this modern data stream is enhanced communication between clients’ key geologists and Orbit Garant’s field teams.

The computerized rigs also significantly lower operating costs. “We can achieve 30 percent greater productivity compared to conventional drilling and have reduced the duration of some clients’ drilling programs by 50 percent,” Alexandre says. In turn, this increased efficiency means that far fewer consumables are being used and rig components are lasting longer.

The revolution is just starting to take hold as 17 of Orbit Garant’s drill rigs now have the computerized system installed. More of the drill rigs are expected to have the system by the end of 2014.

Built on a Solid Foundation
Although it looks to the future, Forage Orbit Garant Drilling was created in 2007 by the merger of two long-standing Quebec-based companies, Orbit Drilling and Garant Brothers Diamond Drilling. The company specializes in diamond drilling for underground and surface mining exploration. Diamond drilling utilizes an annular drill bit with an industrial-grade diamond crown to cut a cylindrical core from solid rock. The company has experience drilling in holes as deep as 3,000 metres.

Headquartered in Val-d’Or, Quebec, Orbit Garant does a lot of drilling in Canada – approximately 90 percent of its revenue is generated there. The company also provides services internationally in well-known mining jurisdictions in Nevada, Mexico, South America and West Africa. Chief Financial Officer Alain Laplante says the company is always looking for attractive opportunities to expand its operations in stable countries and geographically diversify its revenue, but adds that Canada will likely always be the main source of revenues.

Environmental and Worker Protection
It is important that modern drilling companies raise their workplace safety and environmental practices to world standards.

Alexandre says the company’s new computerized drilling system allows for greater worker safety on the project site. “This [computerized drill] machine is safer than the conventional drills,” Alexandre explains. “The controls are automatic. You don’t plug and unplug while you are making a switch from station to station.” Employee handling of heavy machinery is reduced, creating a safer worksite.

To protect the environment while drilling, the company takes preventive measures to avoid lubricant and fuel leaks. The lubricant used for the drill rods are biodegradable. Drip panels are also present to capture any occasional drilling and engine motor fuel leakage.

Every employee contributes to the company’s responsible environmental practices, Alexandre says. “Everyone is responsible for an operation. We instill the mindset that all drillers must make their job sites safe and clean before they return home.”

Dealing with Cyclical Demand
The demand for mineral drilling is down in 2013, especially among junior exploration companies, which are currently finding it difficult to fund their exploration programs, largely because of macroeconomic factors. Among these is a current lack of participation by investors in the mining and exploration sectors.

Although underlying metals prices have largely held up, the share values of many resource companies have suffered. There may be many factors behind this shunning of the sector, but some more commonly heard views are the potential for a decline in metals demand in emerging markets, such as China and India, and the escalating costs of building and operating mines.

“The demand isn’t like it was a few years ago,” Alexandre says. “Even the intermediate and major mining companies are looking at their budgets and trying to control costs to preserve cash.”

However, Alexandre is confident that demand to increase exploration will begin soon. “We believe this slow period is coming to an end,” Alexandre says. “There haven’t been any new major discoveries of note in most major commodities, so resource supplies and inventories may soon begin to dwindle. We believe it’s only a matter of time before producers react to longer-term market demand.”

Although it is difficult to put a timetable on recovery, Alexandre may be on to something. Recent macroeconomic numbers suggest that the world’s largest economy, the United States, is beginning a recovery in key sectors, notably housing, automobiles and other durable goods.

This is likely to lead to greater demand for all base metals, notably iron and copper. There is also some evidence that central bank buying of gold is on the increase, particularly in China.

Preparing for the Future
While Orbit Garant has significantly grown its business organically over the years, it has also made strategic acquisitions that fit its growth strategy. The acquisition of Lantech Drilling in 2012 added geotechnical drilling expertise to Orbit Garant’s service offering. This allows the company to interpret site geology and structural conditions for customers to prepare for project construction and related infrastructure such as bridges, roads and buildings. Geotechnical services can also provide data for environmental assessments.

Lantech also brought expertise in iron ore drilling to Orbit Garant and brought in customers with projects in West Africa.

“We are a one-stop shop for our clients now,” Alexandre says. “If our clients need to go underground, they don’t need to call someone else to do the initial geotechnical work – we can do it. We make it so that we are there in support for the full life of the mine. We believe our added capability in iron ore drilling will position us to capture business in the emerging Labrador Trough region in eastern Canada, and ore deposits in Africa.”

Another big part of the future is training the next generation of drillers. Orbit Garant has partnered with Le Centre de Formation de l’Or’et des bois [Centre for Mining and Forestry] in Val-d’Or, Quebec to create a program for foremen, drillers and helpers. The training program requires a total of 1,600 hours – 900 spent on practice and theory and 700 spent working on a jobsite. “The center teaches theory and we do the practical part of the training,” Alexandre says.

A few years ago, Orbit Garant’s senior management team realized the vast majority of these new recruits would be fully conversant with computers and related technology. It seemed natural that a computerized drilling system would be faster to teach and come as second nature to these future drillers. “It’s amazing how we turned a potentially expensive organizational transition into a positive,” Alexandre says.

With the new computerized drilling, start-to-finish mining services and a superbly trained team, Alexandre and Laplante see a busy future ahead.

“We want to double the size of the company in five to seven years,” Laplante says. “Our goal is to emerge from the current stage of the cycle as one of the world’s best full-service mineral drilling companies and to lead the way in developing fully computerized drilling technology.”