Back to Profile Gallery > ORES

Created in 2009, ORES is the first E&G distribution system operator in the region of Wallonia, which accounts for 55 per cent of Belgium’s territory. The company is operating in 75 per cent of all Walloon municipalities. “Our staff of approximately 2350 people, from managers to technicians and administrative staff, delivers services to customers in 200 municipalities and to the society at large,” explains ORES CEO, Fernand Grifnée. “We distribute energy to more than 1.3 million households and businesses, which accounts for more than 2.5 million people.”

ORES is in charge of the daily operation of electricity, natural gas and municipal public lighting distribution grids, including interactions with other energy market players. “Our dispatching and 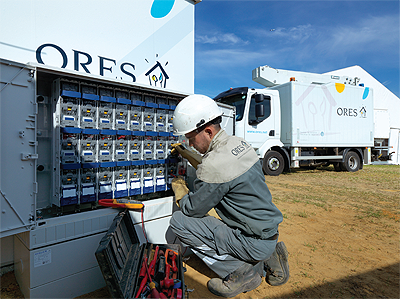 control services oversee these distribution grids 24/7,” Fernand Grifnée continues. “We are responsible for reading the energy meters of our 1.3 million customers; this means lots of data, which we validate, manage and transfer to the appropriate energy suppliers under the strictest of confidentiality conditions. We also have emergency repair teams on duty day and night, 365 days a year, to repair breakdowns, technical failures, outages and gas leaks on the networks.”

Being in charge of the electricity and gas distribution grids for respectively 199 and 112 municipalities, it goes without saying that a great deal of time, effort and capital goes into maintaining the infrastructure and enhancing its performance. “In 2018 alone, we invested 192 million euros in our electricity grids,” Fernand Grifnée reveals. “This include new connections, kiosk substations and stations, the burying of overhead lines, and the replacement, modernisation and digitisation of the grids themselves. These renovations have been motivated by the will to optimise operations and operational costs, and to further improve safety and environmental conditions.”

When it comes to its natural gas activities, ORES invested in total 80 million euros in 2018. Most of these investments were for the replacement or refurbishment of pipes, connections or meters. The replacement of old cast-iron, PVC or fibrocement lowpressure networks is continuing, with more than 20 km being removed in 2018 and replaced by polyethylene pipes, which are better suited to the current usage and operational conditions. “ORES also pursues its policy aiming to maximise the use of existing natural gas networks, by promoting the advantages of gas as a cooking and heating energy. More than 10,000 new customers were gained over the last three years thanks to a specific marketing campaign,” Fernand Grifnée states.

Smart change
Like many distribution system operators, ORES has been making a concerted effort in recent years to improve its systems through the widespread adoption of smart technology. The concept of the ‘smart grid’ entails communicative connection between all actors in the energy supply system, encompassing power generation, transmission, storage and distribution, through to consumption of electricity. The result is an integrated, ‘smartised’ energy grid that relies upon precise (big) data and innovative information technology to facilitate the energy transition.

“ORES is integrating more and more IT and telecommunication systems into the grids in order to produce a more accurate, instantaneous view and control of the system. This involved the use of new tools for voltage adjustment, remote monitoring, remote metering and remote control, while relying on a suitably integrated IT and telecommunication base,” Fernand Grifnée says. “The transition to smart metering is also an important element in the implementation of smart grids, as the recording of energy consumption data can help ORES to better manage its networks. Smart 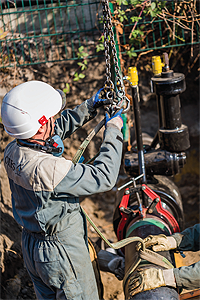 meters could also help consumers to optimise their consumption, based on accurate information and new pricing concepts. Over the last few years, ORES has tested several smart metering systems.”

Mid 2018, the Walloon government adopted framework legislation that changed the approach taken previously. From an earlier expected generalised deployment of smart meters for all customers in Wallonia as from 2020, the government rather chose a segmented approach (big residential consumers, prosumers, social customers, new connections…) as from 2023 and on a tenyear time frame. This led to a change in the strategy of ORES as regarding smart metering implementation. The company decided to switch from a power-line communication (G3 PLC-based) approach to a wirelessbased approach. ORES now harnesses this ten-year program in close collaboration with RESA, the other main DSO in Wallonia, and with a new focus. Smart meters will replace the existing meters over time and should empower concerned consumers to better manage their energy bill.

Improved customer service
More than ever, consumers have come to expect fair pricing of energy distribution and a high-quality, tailored and fast service through both traditional and digital channels. In response to this demand ORES has been developing its digital offer by introducing new services. For example, interactive online forms and self-service portal for consumers asking connection to the grid, internet tools informing the customers on network outages, or instructional videos and blogs that provide practical advice on issues such as energy efficiency. The aim is definitely on better service and value for the customer.

As far as company social responsibility is concerned, Fernand Grifnée points out that as well as efforts in the areas of smart grids and smart metering as energy transition tools, the company will also play a role in the promotion of green mobility options, particularly the use of compressed natural gas (CNG) as a vehicle fuel. “CNG is not only eco-friendly, it is also based on mature technology and is already available across parts of the region through the distribution network. ORES has already begun converting part of its own vehicle fleet to CNG and is positioning itself as a facilitator to help all stakeholders, whether public or private, who wish to install CNG stations,” he states.

Transformation
The energy transition process represents a major change in the electricity sector. The level of installed intermittent renewable capacity connected to the distribution grid increases. Locally-connected generation, storage facilities and flexible demand bring new opportunities – and risks – to distributors. “Within this context, and also to be able to answer to new customers’ needs, ORES is transforming itself. We have set our roadmap in 2018 and are pursuing our transformation policy according to our 2019-2025 strategic business plan. It is focused on modernising our processes and systems in line with the best practice, so as to fully embrace the transition to a smarter grid and to a low carbon society. Our vision is one of responsibility: we want to facilitate energy and facilitate life for all citizens and stakeholders of the company,” Fernand Grifnée concludes.