Back to Profile Gallery > ORES

As was the case in many other European countries, in Belgium the electricity and gas (E&G) sector was at one time closely integrated, with one or two organisations or entities maintaining overall control of its energy networks, from generation to distribution. From the year 2000, there was a gradual unbundling of the industry, subsequently creating a liberalised energy market that was 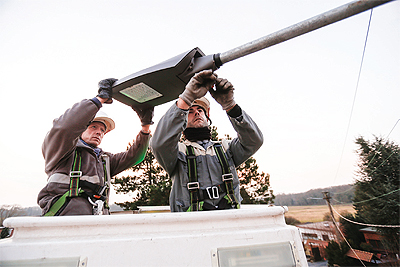 Today, Belgian consumers typically have two main points of contact, these being their supplier and the distribution system operator. Created in 2009, ORES is the main E&G distribution grids/systems operator in the region of Wallonia, which accounts for 55 per cent of the country’s territory, where it is active in 75 per cent of all Walloon municipalities. “Our staff of approximately 2250 people, from managers to technicians and administrative staff, help to serve the residents of 198 municipalities and society at large,” explains ORES CEO, Fernand Grifnée. “Together our staff monitor the distribution of energy to more than 1.3 million households and businesses, which accounts for around 2.5 million people. In 2017, ORES generated a consolidated turnover of 1106 million euros, with an EDITDA amounting to 380 million euros.”

ORES is in charge of the daily operation of electricity, natural gas and municipal public lighting distribution grids, covering all the interactions with other energy market players that these tasks entail, i.e. meter reading, data validation and communication. Managing the electricity distribution grids for 195 municipalities and natural gas grids for 109, it goes without saying that a great deal of time, effort and capital goes into maintaining said infrastructure and enhancing its performance. “In 2017 alone, we invested 178 million euros into our electricity grids,” Grifnée reveals. “This includes the construction of new connections, kiosk substations and stations, the burying of overhead lines underground, and the replacement and modernisation of the grids themselves. Several hundred kilometres of lines and cables were renewed or reinforced.”

Investment projects
When it comes to its natural gas activities, ORES invested more than 84 million euros in 2017. Most of these investments were devoted to works to replace or refurbish pipes, connections or meters. “We also want to develop our customer basis on the existing networks and are promoting actively the advantages of natural gas. Furthermore, we promote greener mobility options, particularly the use of compressed natural gas (CNG) as a vehicle fuel. ORES has already begun converting part of its own vehicle fleet to CNG and is positioning itself as a facilitator to help all stakeholders, whether public or private, who wish to install CNG refuelling stations for vehicles,” Grifnée states.

A significant recent development involving the business, and one which will greatly assist ORES with its ongoing programme of upgrades and modernisation, was the announcement last year that it had been granted a 550-million-euro loan from the European Investment Bank (EIB) as part of the bank’s priority policy to support climate action and safe, efficient energy networks. “The EIB loan will help to support our investment projects during the period from 2018 until 2022,” Grifnée comments. “These include standard replacement or refurbishment works on the existing networks, while 25 per cent of the amount allocated will be for environmentally-friendly investment projects, such as renewable energy grid connections, systems to help reduce electricity losses and the construction of low-energy buildings such as our future headquarters that will be inaugurated next year.”

Strategic vision
Within the context of energy transition, ORES has been making a concerted effort to revolutionise its networks and systems through the widespread adoption of smart technology. The concept of 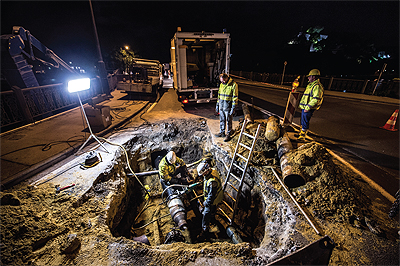 the ‘smart grid’ entails communicative connection between all the actors in the energy supply system to the power grid, encompassing power generation, transmission, storage and distribution, through to the consumption of electricity. The result is an integrated, ‘smartised’ energy grid that relies upon precise data and information to operate in a way that meets energy transition needs.

“Such as the energy sector, ORES is transforming itself. We want to become a genuine distribution system operator, rather than a grid operator. This means that we have to integrate more and more IT, software and telecommunication devices into the network in order to produce a more accurate, instantaneous view and control of the system. This involves the use of new tools for voltage adjustment, remote monitoring, remote metering and remote control, while utilising a suitably integrated IT and telecommunication base,” Fernand Grifnée says. “The transition to smart metering for instance is an important element in the implementation of smart grids, as the recording of energy consumption data can help ORES to better manage its networks. Smart meters should help consumers to optimise their consumption based on accurate information and maybe new pricing concepts. In the last several years, ORES has tested several smart metering systems, choosing to implement the 3G-PLC smart metering standard as from 2020, within respect of the timeframe and conditions that will be set legally.”

At the same time, consumers have come to expect a high-quality, tailored and fast service that operates through both traditional and now digital channels. In response to this demand ORES launched a new website in 2016, and in the years since has continued to develop its digital offering by introducing new powerful tools, for example interactive online forms, online information about network outages, and instructional videos and blogs that provide practical advice on issues such as energy efficiency. A further new service unveiled by ORES is its ‘Connect My Home’ offering. It offers new home owners a carefree service, taking care of the administrative management and practical organisation of all their connections to the relevant basic utilities: electricity, gas, telecommunications and water. This is yet another example of ORES striving to make its customers lives easier.

Turning back to what will be the focus of ORES in the coming years, Fernand Grifnée points out customer orientation as well as the efforts in the areas of smart grids and smart metering. “ORES today is transforming itself to be able to play an active role in energy transition. We have to deal with multiple challenges: keeping our networks fit for purpose, turning them into smart systems, accommodating new customer requirements, bringing more flexibility and agility into our workforce culture and maintaining high operational efficiency and responsible costs. It’s a massive job. The company management and workforce is harnessing it with confidence. And with a shared strategic vision aiming at facilitating energy for the customers.”