Since its formation in 1981, Paladon Systems’ business has always been to provide comprehensive, fit for purpose and cost effective valve automation solutions to its clients, and the industry sectors they serve.

Today the company’s core activities lie in the design, manufacture and testing of all types of valve actuators and control systems. Initially, Paladon Systems was primarily focused on the UK North Sea developments of the oil and gas industry, where it quickly established itself through a unique approach to market and innovative engineering.

Today, Paladon Systems’ product range is especially comprehensive with both quarter-turn and linear valve actuators, as well as all types of bespoke valve on/off and positioning control systems. Some of the biggest areas of development in recent years though have lain in the company’s control system designs and components, such as its Partial Stroke Test (PST) Controller.

Although partial stroke testing solutions have been around for some time in the case of pneumatic actuators, when it comes to hydraulically actuated valves the technical challenge involved is far greater. Essentially a development of the company’s positional control system, Paladon Systems’ PST Controller was launched at the end of 2010 in association with its technology partner, Orange Instruments. The system addresses an industry concern regarding valves for critical applications, which are not regularly operated, and therefore may not function as required in an emergency situation.

“Partial valve stroking really came into legislation when it was suggested that periodic operation of emergency shutdown (ESD) valves should be adopted so that the integrity of the system is tested, and the certainty of the valve operating in an emergency is greatly increased,” explains Brian Ennever, managing director. “Despite the fact that many of the pipeline valves on large offshore and onshore facilities are operated by hydraulic actuators due to them being smaller and lighter than their pneumatic equivalents, we realised that there was no package designed specifically to partially stroke these and therefore took this opportunity to develop our own.”

The resulting product builds upon Paladon Systems’ existing positional control system technology, which already continuously monitors the position of the valve. Therefore the PST Controller takes this a step further either with a built in function to initiate a partial stroke test at an operator determined interval, or the capability to initiate this in response via a remote signal. 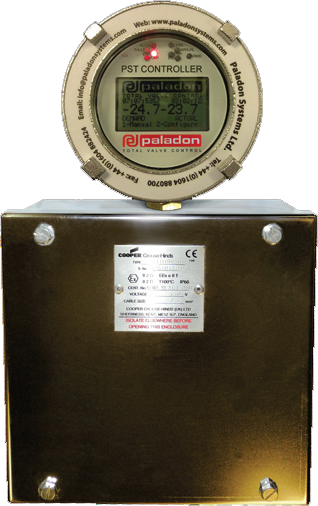 “In the past it used to just be a matter of checking that the valve would move when it needed to, however with our technology it will not only automatically carry out the partial stroking, but also monitor various parameters such as how long it has taken to move the valve a certain amount or the actuator supply pressure required to do so,” adds Mike Northwood, product manager. By having a record of what is happening, operators can compare the results of the test with figures for when the valve was first installed, and if there is any deviation take appropriate action through a preventative maintenance programme.

As oil and gas resources become more difficult to extract, operating environments equally grow more challenging in terms of high pressure and high temperature conditions, and the risks associated with these. As such, for a number of years High Integrity Pressure Protection Systems (HIPPS) have been utilised as the last line of defence in protecting downstream operations from over pressurisation. “A HIPPS system is an independently instrumented protective device, which is rigorously certified to ensure maximum reliability. The offshore industry is seeing increasing requirements for such systems, particularly given the move into deeper drilling. A lot of operators are also tying back old or unpredictable wells, which historically were not worth producing from, back into existing platforms that cannot always handle the pressure spikes from these types of wells. Therefore a HIPPS is designed to protect these platforms from catastrophic over pressure situations,” describes Matthew Shepherd, marketing manager.

In the past though, some end users have struggled to implement HIPPS economically due to the sheer number of different disciplines and requirements for these complex and critical systems. Having previously supplied the actuators and control systems for such systems, more recently Paladon Systems has moved into offering a one-stop-shop service for clients to purchase turnkey HIPPS from. Together with various partner organisations, Paladon Systems works with them to deliver a complete certified package.

Elsewhere in the business, Paladon Systems has also been laying the necessary foundations for future growth such as expanding its distribution channels, and undergoing a certification/approval process, which now sees the company approved by nearly all of the world’s major oil and gas producers. Specifically, Paladon Systems is working to increase its presence in the US market through a new distribution deal with a major US equipment supplier for its standard products, coupled with another agreement with an engineering company in Houston for the more bespoke and technologically advanced products in its portfolio.

As a smaller player in its sector, Paladon Systems has always found success in niche markets and advanced technologies that larger companies may not have the business models to support. In terms of where this approach leads the business next, Matt concludes: “Interestingly when Paladon Systems began we brought our actuators from another supplier and then added the controls and valves to sell as a package. We then moved into manufacturing the actuators, adding the controls and selling the package. Now we see we’re heading towards a new model in the US where we manufacture actuators for others who then add the other components and sell the package. This helps to lower our manufacturing costs as we can increase our volumes of standard actuator products, which in turn generates the capital for us to concentrate on the advanced technologies that we excel in.”