Parker Hannifin is one of the world’s leading engineers of motion and control systems, making a wide range of products for multiple applications, including environmental technologies, aerospace, electromechanical devices, pneumatics and hydraulics, filtration, and sealing and shielding.

In 2007, the company bought Scanrope Subsea, a company that has spent more than three decades producing cables, umbilicals and mooring ropes for the oil and gas industry. Parker incorporated the business into its Fluid Connector Group’s Energy Products Division (EPD), renamed it Parker Scanrope, and today it produces the core of Parker Hannifin’s subsea offering. 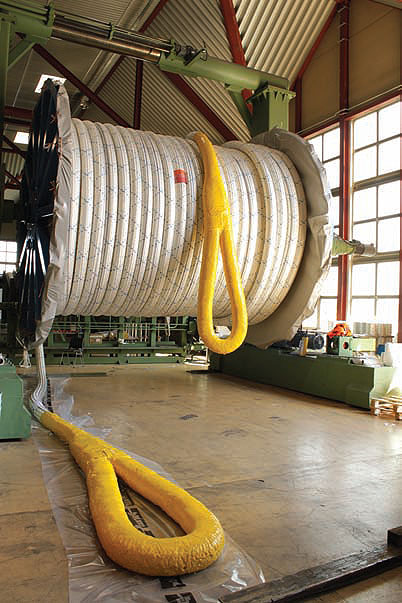 Parker Energy Products Division owns one of the largest spiral strand mooring and polyester rope manufacturing facilities in the world. It contains two production systems, including unique in-line tensioning and measuring equipment that achieves precision regardless of cable length. Large take-up spools (three 2200 tonne turntables and three 650 tonne turntables), a 250 tonne crane, and a location on the Tønsberg quayside provide direct access to ships. Parker Energy Products Division also has an umbilical manufacturing facility in Freeport, Texas, which is equipped with three 1100 tonne spools to support projects in the Gulf of Mexico.

Parker Energy Products Division is renowned for its industry-leading products that have been used across many important sites. In February 2012, for example, it was awarded a contract by Statoil to provide a 24 kilovolt (kV) subsea power cable that includes fibre optic communication capabilities. The line will be installed in the North Sea, running between the existing Kvitebjørn platform and the unmanned Valemon platform, which is expected to open fourth quarter 2012. The cable will be installed at a depth ranging between 130 and 200 metres, and will provide all of Valemon’s required power and communications. It is a highly sensitive installation and Parker Scanrope was chosen following its previous Statoil contract in June 2011 for an umbilical in the Smørbukk field.

During the same month, Parker Energy Products Division was awarded a contract with Northwind NV to supply infield array cables, accessories and related offshore services at the Northwind offshore wind project in Belgian waters. Approximately 51 kilometres of 36kV power cable with in-built communication line will be used to connect all 72 turbines at the windfarm, forming the entire inner electric grid. The project is currently underway with completion expected in Spring 2013. Parker is also currently producing a 60 km 36kV submarine power cable to be used in the Middle East, following a successful delivery of 60 km cable last year to the same client.

The previous year was equally successful for Parker Energy Products Division. Parker was awarded a contract with Van Oord for the production and supply of 111 km of infield cables, accessories and offshore services to the Dan Tysk offshore wind farm project. A joint venture between Vattenfall Europe Windkraft GmbH and StadtwekeMünchen, the Dan Tysk wind farm is located approximately 70 km west of the island of Sylt, Germany, and will have a total capacity of 288 megawatts. The cables supplied by Parker EPD will be delivered in four shipments in the Spring of 2013, and used to connect the wind turbines to the offshore transformer station.

In October 2011, Parker Energy Products Division was awarded a contract by Chevron USA Inc. to produce, in total, 56,000 metres of polyester mooring lines for securing the oil major’s Jack and St. Malo floating production platform in Walker Ridge, the Gulf of Mexico. The mooring lines will be installed at a water depth of approximately 2100 metres and are some of the strongest ever produced for offshore platforms. The ropes have a minimum break load (MBL) of 2300 tonnes and a qualified average MBL of 2445 tonnes. In addition to the mooring lines, Parker will also provide offshore field inspection support services during installation.

Breaking the 2000 metre depth barrier makes Jack and St. Malo amongst the deepest mooring lines in the world. Other deep lines around the world include the Shell/BP Nakika platform and BP Atlantis, which share a depth of 2000 metres, and the record-holding Shell/Technip Perdido SPAR project at 2450 metres. All of these projects use mooring lines by Parker Scanrope. The company’s history in high quality manufacturing makes Parker the easy choice for moorings. In fact, Parker Scanrope is involved with 62 of the largest mooring projects in the world.

Latin America, chiefly Brazil, is proving particularly interesting for Parker. The oil and gas industry has begun moving into South American waters during the last five years and, with the worst of the financial crisis behind us, many oil and gas majors are returning to projects previously placed on hold. This means drilling platforms and FPSOs will become increasingly common throughout Brazilian and Mexican waters, providing Parker with a large number of potential deepwater projects for its mooring lines, supported by the Parker Brazil team and their new service center in Macae.