Back to Profile Gallery > Parkwind NV

In March 2007, leaders and representatives of the major European nations gathered to ratify and sign one of the most important packages of climate and energy legislation in recent memory. Given the moniker “20-20-20”, the targets are designed to complete the transformation of Europe into an energy-efficient, low carbon economy. This is to be achieved by committing to a 20 per cent reduction in greenhouse gas emissions from those levels recorded in 1990, by increasing renewable energy consumption to 20 per cent and achieving a 20 per cent improvement in overall 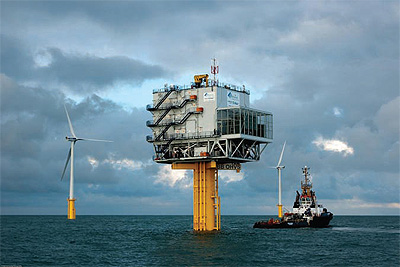 In the decade since the aforementioned legislation was written into European law, companies operating throughout the energy, oil and gas sectors in particular have strived to make a telling and lasting contribution to the continent’s climate targets. One such company, Parkwind, is a perfect embodiment of this commitment.

Founded in 2012 as a result of the amalgamation of the offshore wind investments and development resources of its Flemish shareholders, Colruyt Group, PMV and Korys, Belgian company Parkwind is recognised today as one of the North Sea’s premier developers, builders, operators and financers of offshore wind farms.

As per Europe’s 2020 targets, 13 per cent of Belgium’s total energy usage is to be generated through clean, sustainable means by the turn of the decade. Wind energy is undoubtedly at the forefront of driving the country towards this goal, a fact emphasised when you realise that this industry is currently responsible for providing more than 200,000 jobs across the continent.

Located 46 kilometres off the Belgian coast on the Bligh Bank, the Belwind wind farm has been in operation since December 2010. Comprised of 55 wind turbines, each generating three megawatts of clean power, Belwind boasts a total capacity of 165 megawatts, supplying clean energy for approximately 160,000 Belgian households. It is estimated that Phase 1 of Belwind alone has helped displace 270,000 tonnes of carbon dioxide and that for an investment totalling 614 million euros the Belwind project alone contributes towards 4.7 per cent of the Belgian government’s targets under the 20-20-20 programme.

On a larger scale is the Northwind wind farm. Phase 1 of this project, which involved the construction of 72, three megawatt turbines on the Lodewijkbank, has been in operation since May 2014. Today the farm’s turbines possess a total capacity of 216 megawatts, providing enough energy to power some 250,000 Belgian homes and is estimated to contribute towards saving around 255,000 tonnes of carbon dioxide a year.

Parkwind’s latest undertaking began to take shape in March 2016. A separate legal entity managed by Parkwind, Nobelwind was created with the mission statement of designing, building and operating the fourth largest offshore wind farm, within the extensive Belwind concession. In charge of the coordination of the construction works of the farm, Parkwind holds a majority 41.08 per cent share of the project’s partnership and is joined within a shareholder consortium with Japanese conglomerate Sumitomo, which holds a 39.02 per cent stake and the Dutch investment company Meewind, which holds a 19.9 per cent share.

Found some 47 kilometres off the coast of Zeebrugge and stretching across an expansive area of 19.8 square kilometres at an average sea depth of 33 metres, Nobelwind’s offshore grid is connected 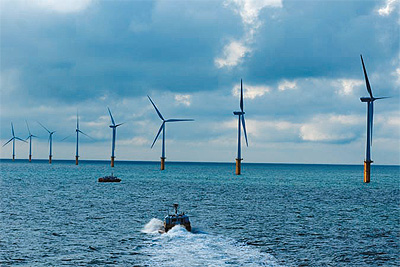 to the Zeebrugge sub-station of Elia via an export cable. An offshore high-voltage substation was commissioned and constructed for the purpose of converting the voltage provided by the wind turbines.

Once operational the projects’ 50 V112 3.3 megawatt MHI Vestas wind turbines will possess an installed capacity of 165 megawatts and will be expected to supply green power to 186,000 Belgian properties on an annual basis. Each turbine reaches a height of 135 metres, with a hub height of 79 metres and a rotor diameter of 112 metres. Topping these turbines are 55-metrelong blades, each weighing a not inconsiderable 12.5 tonnes. The project was initially conceived with an estimated investment of approximately 655 million euros.

As per the company’s established commitment towards reducing the environmental impact of its operations, the Nobelwind wind farm project shares the traits of Parkwind’s two other venues in that it is located in an area of ocean closed to shipping and fishing operations. The hope for the company is that, like in the areas surrounding the Belwind and Northwind projects, the surrounding waters will ultimately become important biodiversity centres where numerous marine animal and plant species can flourish in relative peace.

The first foundation components for the Nobelwind wind farm project arrived at the harbour of Oostende in late March 2016. A month later work on the installation of scour protection around the foundations began, thus firing the starting pistol on the project’s offshore activities. Consisting of a light filter layer and a heavier coating layer, specifically designed to withstand conditions experienced at various water depths, these initial offshore works provided the necessary erosion protection and stabilising of sea cables to support the project’s structures for the next 25 years. On 9th June 2016, the company announced the completion of the installation of scour protection around the 51 foundations of the Nobelwind project.

With work continuing at pace, the last ten foundation components for the project arrived at the port of Oostende on 7th July 2016. Two months later, on 22nd September 2016, Parkwind announced the successful installation of the last foundation for the Nobelwind wind farm.

On 9th January 2017, Parkwind proudly reported via social media that the first MHI Vestas wind turbine at the Nobelwind offshore wind farm had been recorded as producing power. With this hugely significant milestone Parkwind will be more than confident that it will meet its expected timescale of bringing the Nobelwind project to completion in December 2017.