March of the penguins

Set up in Singapore in 1972, Penguin was founded as a sole proprietorship to operate passenger ferries between Singapore and its surrounding islands. In 1995, the company built its first aluminium vessel and two years later it floated on the Stock Exchange of Singapore.

Today, the company operates under the name of Penguin International Limited, which is the public holding company for its shipbuilding, ship management and ship operating divisions. Specialising in the construction, repair, operation and management of high-speed aluminium commercial vessels, such as offshore crew boats, fast supply intervention vessels (FSIVs), passenger ferries and patrol boats, Penguin also owns a handful of steel vessels.

“Most of our vessels are passenger ferries, crew boats and FSIVs, and our main charter market is Southeast Asia,” says James Tham, Penguin’s 40-year-old managing director. “We leverage on our local strengths to tap global opportunities. To date, we have built vessels for ship owners in West Africa, the Middle East and of course, Southeast Asia.”

As part of an ongoing effort to focus its resources on its core shipbuilding and chartering businesses, Penguin recently sold off its retail-based ferry ticketing business to an Indonesian buyer for US $11 million. After the sale, the group will continue to operate ferries on chartering and project bases, while steering clear of the cutthroat retail ferry business.

Penguin’s core aluminium shipbuilding activities are carried out at its 12,000-sqm shipyard in Tuas, Singapore and 50,000-sqm shipyard in Batam, Indonesia. The Tuas yard is equipped with a 500-ton marine travel lift, one huge assembly hall and a 100-metre waterfront that enables it to take on a wide range of newbuild and repair projects. The Batam yard comes equipped with two assembly halls, one measuring 100 metres long and 40 metres wide, a 100-metre waterfront and a 250-ton marine straddle carrier, all operating within a secure location.

Penguin’s 100-metre workshop in Batam is believed to be the largest dedicated aluminium shipbuilding assembly hall in Southeast Asia. The new workshop is part of a multi-million dollar development work at Penguin’s Batam yard – named PT Kim Seah Shipyard – which includes significant improvements to the site’s infrastructure and supporting facilities.

Why is Penguin investing so heavily in aluminium shipbuilding? One key reason is that the group’s flagship Flex-36 offshore crewboat is practically flying off the shelves. This year alone, Penguin Shipyard International in Tuas and PT Kim Seah Shipyard in Batam is delivering at least ten units of Flex-36 crewboats to ship owners around the world.

The Flex-36 is by far Penguin’s biggest seller, practically defining the market for mid-sized crew boats in the Southeast Asian oil and gas industry since 2007. The 36-metre vessel is a multipurpose workhorse in the offshore industry, capable of transporting 70-80 passengers at speeds of up to 25 knots. Equipped with fire fighting capabilities and oil spill dispersant booms, the vessel can also carry 60,000 litres of fuel, 25,000 litres of fresh water and 40 tons of deck cargo. 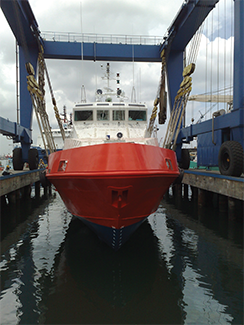 As a Flex-36 can potentially be deployed as an offshore crewboat, a security escort vessel, a rescue/standby vessel or a windfarm installation support vessel, it is little wonder that Penguin is racing to build them as fast as the market needs them.

“We design and build ships that make good operational and commercial sense,” explained James. “And we are able to do that because we are a builder, owner and operator. In short, we know the trials and tribulations of owning crewboats and ferries. We feel our clients’ pain.”

James is coy about revealing his 2012 Flex-36 production figures, but based on Penguin’s enlarged and upgraded shipbuilding facilities in Singapore and Batam, the group can easily churn out well over 20 Flex-36 crewboats a year, should it choose to do so.

Already, Penguin’s shipbuilding schedule this year has made it the most prolific builder of mid-sized crewboats in Southeast Asia and the Middle East. But despite the signs of an improving offshore market, James sounds a cautionary note.

“Let’s not forget our recent painful lessons in over-investment and over-speculation,” he opined. “We’re definitely not out of the woods yet. There are still many distressed ship owners out there with idle vessels. We are keeping a close watch on global markets.”

Nevertheless, Penguin’s investment in its aluminium shipbuilding capabilities belies a quiet confidence in its flagship Flex-36, which has found favour with oil companies around the world.

Between Penguin’s shipbuilding and ship operating units, the group’s main clients are oil companies, offshore contractors and ship owners around the world. “Penguin’s core market is our home region of Southeast Asia, while our key overseas markets are the Middle East and West Africa. In recent years, we have received a rising number of crewboat and FSIVs enquiries from South America and Central Asia as well,” James continues.

Complementing the activities of its shipbuilding business, Penguin also owns Pelican Offshore Services, which is the group’s offshore ship owning and chartering unit that owns crewboats and FSIVs, which are managed by another unit, Pelican Ship Management Services.

Being a multi-faceted global brand is, in itself, a unique selling point the company can trade on, but as James highlights, it isn’t the only strength that Penguin possesses: “Our key strength lies in our sensible, some say conservative, approach towards business. While we may not be a large company in terms of market capitalisation, we are very lightly geared. Our strong balance sheet has seen us through some tough times.”

It is no small wonder that Penguin is able to build its Flex-36 crewboats without orders and without external funding. Ship owners choose to build ships at Penguin because the group empathises with the challenges of ship owning and responds to its clients in a timely, professional and efficient manner.

However, delivering diverse services to oil and gas companies presents its fair share of challenges that Penguin must overcome on a daily basis: “The biggest challenge in servicing the offshore industry is having to consistently deliver world-class services with high-quality safety and operational standards at lightning-speed response times, all at globally competitive rates,” James says. Such commitment, passion and focus means that Penguin can look forward to a bright future doing what it does best and loves most.