With a 40-year heritage, Peterson SBS has grown alongside the North Sea oil and gas industry, particularly within its home market in the North East of Scotland and the Shetland Islands.

Since the late 1990’s the business has expanded further throughout the UK, with facilities at a number of prominent ports including a major integrated asset base in Aberdeen. In total this portfolio spans 70,000 square metres of warehousing and 200 acres of open storage in Edzell, Great Yarmouth, Heysham, Shetland, and Aberdeen.

In 2008 Peterson SBS underwent its most significant development to date, when it was incorporated into the Dutch logistics group Peterson Control Union. Established in 1920 as a privately owned inspection company for the grain trade and transport industry in the Netherlands, Peterson Control Union has expanded substantially into a truly global organisation in the field of inspection, quality management and logistics. As part of this group, Peterson SBS has access to infrastructure and resources in over 60 different countries, and is increasingly using this network to launch its range of added value logistics services to upsteam oil and gas clients. Already in 2011 the company has secured contracts in India, Qatar, and Saudi Arabia, and continues to pursue other opportunities in Tanzania and Brazil.

“Peterson SBS is recognised for its experience in land, sea, and air logistics for the upstream oil and gas industry,” begins Mike Porter, managing director and group director of Peterson SBS. “As well as our ability to deliver these services, we are increasingly being approached to advise on the effectiveness of existing logistics strategies, designing supply chains, and assuring services supplied by other parties.” In particular Peterson SBS has traditionally focused on the Dutch and UK sectors of the North Sea, with a long lasting commitment to meeting its clients’ evolving needs.

This expertise is translated into a comprehensive range of services including supply base operations, lifting and distribution, inventory management, and marine and aviation support. In this respect, Peterson SBS differentiates itself from its market competitors as one of the only companies that is able to provide numerous services within the scope of a single contract. This integrated solution capability is available throughout the supply chain, and at each stage of an oil field’s operational life, providing customers with the security of ongoing support and efficiency. 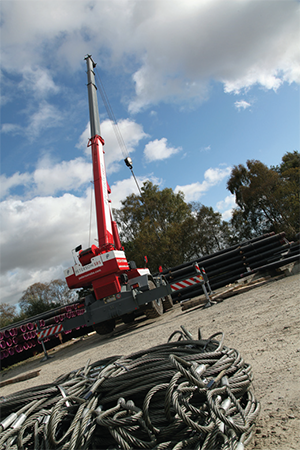 For many of Peterson SBS’ clients the challenge is balancing these logistic requirements with value driven and efficient services. Based upon this understanding, the company initiates and manages vessel-sharing arrangements, with the aim of providing an efficient pool of supply vessels and bases for the operations of its partners. By bringing together its own pool of vessels for clients to utilise and share, Peterson SBS has opened up a level of logistic capability that some could not afford outside of the scheme.

Displaying its unequivocal knowledge of its market, since 1997 Peterson SBS has actively been involved in the decommissioning of offshore structures through its purpose built facility in Shetland. As the North Sea region continues to mature the oil and gas industry is increasingly becoming focused on the necessity of decommissioning. Having operated in this market since its early beginnings, Peterson SBS is well aware of these asset lifecycles and therefore has already positioned itself as a capable contractor in this sector.

This is demonstrated by the company’s recent work alongside Veolia Environmental Services (UK) Plc in the onshore dismantling of structures from the Inde gas field on behalf of Shell UK. Following preparation works in January this year, Peterson SBS has offloaded eight gas field jackets and eight topside structures with a total weight of around 10,500 tonnes. The redundant offshore structures from the field were delivered on barges to a former building shipyard in Wallsend, which is operated by Peterson SBS’ decommissioning partner Veolia Environmental Services. Peterson SBS’ role in these activities was to safely transfer the enormous structures from the barges to specified locations within the site for demolition to take place.

With another major decommissioning project already on the company’s books for later this year, Mike elaborates on how Peterson SBS is capitalising on its specialist infrastructure: “This project will take place at our facility in Shetland over a three year period, where we will receive over 15,000 tonnes of subsea structures. Other similar projects are at earlier stages in their development and we are providing technical advice to our client’s project teams in progressing these. We expect this to be a major growth area for the business and therefore are looking to increase the number of sites in our portfolio that are capable of handling these structures.”

Peterson SBS is also continuing to grow its UK storage capacity and has plans to add a further 12,000 square metres of internal storage in the Aberdeen area throughout 2011 to meet demand from its customers. “There has been a distinct change in the market in recent years where our customers increasingly want to focus on the care and maintenance of their extensive inventory of oilfield equipment. They want to consolidate in one location and outsource this critical role to specialist contractors such as ourselves,” states Mike.

Indeed the North Sea market trends have seen cargo volumes and occupancy levels at its logistic hubs to be higher this year than in 2010, and with a healthy number of capital investment projects in the pipeline the immediate future looks positive. In terms of capitalising upon these opportunities, Mike highlights his strategy for Peterson SBS over the next few years: “The company will continue to develop its vessel, helicopter, and supply base sharing concepts for all markets, whether exploration, production or decommissioning, and grow beyond Europe in areas where we have the support of the wider Peterson Control Union Group.”