Operating on the island of Cyprus for 60 years, Petrolina (Holdings) Public Ltd (Petrolina) is a leading Cypriot petroleum company in the local energy sector. Driven by its mission to provide excellent petroleum products at the most competitive prices, its activities include a countrywide network of service stations, the import, storage, and marketing of petroleum products and lubricants, as well as aviation refuelling services. 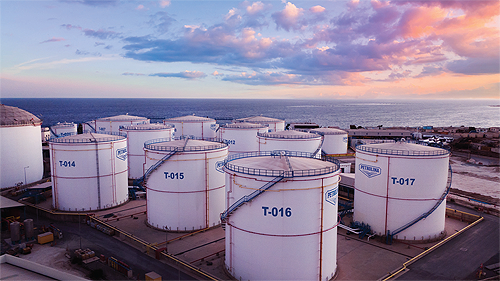 The first Cypriot-owned company to operate in the import, storage, distribution and sale of petroleum products, Petrolina was the brainchild of five visionary brothers, Nicos, Takis, Kallis, Kikis and Nakis Lefkaritis. “The idea behind the company came from their collective need to refuel their transportation fleet of more than 300 buses and trucks, which they had established back in 1946,” explains second-generation Managing Director (CEO), Dinos Lefkaritis. “Together, they helped establish the company’s infrastructure and facilities in Larnaka, as well as develop a network of petrol stations across the island where they could market petroleum products under the ‘Petrolina’ brand.”

“At the turn of the century, it was decided that the company would go public, with its shares listed on the Cyprus Stock Exchange, a move that resulted in the adoption of our present-day name of Petrolina (Holdings) Public Ltd,” Dinos continues. “Soon thereafter, we officially entered the aircraft refuelling sector through PPT Aviation Services Ltd, a joint venture with our international partners, and today we hold a market share of approximately 50 per cent of the supply of aviation fuel to both Larnaca International Airport and Pafos International Airport. In more recent times, we have also further enhanced our presence in the jet fuel business through the acquisition of Hellenic Aviation Fuels Company, which possesses licenses for the refuelling of aircraft at a number of airports in Greece.”

However, arguably the most significant moment in the company’s recent history – and one that is helping to enhance its independence in the oil storage sector – was its purchase of green-field space and existing depots spanning some 35,000-cubic meters in the Vassiliko Energy Centre. “Having taken our first steps into the Vassiliko area back in 2004, it was later decided that what would best support the long-term advancement of Petrolina would be the construction of its own terminal premises here,” Dinos states.

Inaugurated in 2020, and representing a total investment of approximately €80 million, Petrolina’s Vassiliko terminal is one of the most modern facilities of its kind in the region, and has given the company around three times the storage capacity of its previous Larnaka terminal. Consisting of 18 tanks, the terminal now gives the company a total capacity of 113,000 cubic metres of petroleum products.

Establishing a new terminal in Vassiliko meant bringing down the curtain on Petrolina’s Larnaka terminal, where operations formally ceased back in January 2020. Since then, the company has been embarking on a complex programme of demolishing its former site, dismantling 19 tanks, various supporting infrastructure, offices and warehouses. “Our efforts in Larnaka are today at an advanced stage, with work due to be completed by the summer of 2021,” Dinos explains. “The land upon which the old terminal sits belongs to both the company and the Lefkaritis family, and we have ambitious plans – after demolition and cleaning of the area is complete – to convert this two kilometre beachfront space into a tourist area.

“By investing considerable capital in order to transform this formerly industrial zone into a tourist complex and attracting visitors to the area, we have every confidence that we can positively support regional growth, as well as the local and national economy of Cyprus. As a family, we are actively investigating the best means of developing the area, whether that means taking on 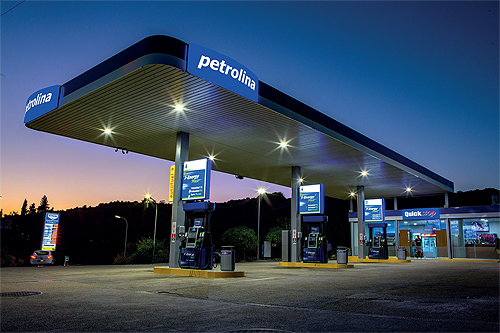 specific tasks ourselves, or by bringing on-board investors, partners or third-party contractors to deliver works. One medium-term goal that we have is to bring in international architects in the coming months to help us to map out the area and create a comprehensive plan of what a tourist complex will look like. We expect that once people are able to see the ambitious plans we have for the area, we will be able to attract further investment.

“This is, however, a large area that requires development, making it a complicated, multi-layered project, but we have been very fortunate to receive the support of the Government and various local and national authorities, who have assisted us in negotiating our way through the various layers of bureaucracy that exist. This gives the family and the company a great deal of confidence and optimism about the long-term outlook for our Larnaka site.”

As a historically forward-thinking organization, Petrolina always has at least one eye firmly fixed on what the future holds, not only for itself, but for the Cypriot economy as a whole. Key to this will be the success of its Vassiliko terminal. “This is truly the jewel in the crown of the business,” Dinos states. “As one of the most technologically advanced facilities of its kind, it has been designed and furnished with state-of-the-art equipment designed to handle products of the highest quality. Using digital technology and advanced automation, we are able to load our trucks here at Vassiliko in a matter of minutes, as opposed to the several hours this process would take in Larnaka, ensuring that they are on the road and supplying our stations around the clock.

“The terminal has also been built with safety as a paramount concern throughout, and with a commitment to doing things in an ever-cleaner, environmentally conscious manner. LTDUltimately, we are here to serve the people of Cyprus, and it is to them that we want to be able to demonstrate on a daily basis that we are doing everything that is expected of us in order to best contribute to the development – and betterment – of the island.”