In 1969, following two years of construction, the UK welcomed the arrival of the Humber Refinery. Built near the village of South Killingholme, North Lincolnshire, five decades on it is one of six remaining refineries operating in the UK and is responsible for generating approximately 20 per cent of the UK’s transportation fuel requirements in the form of Liquefied Petroleum Gases, gasoline, diesel and aviation fuels which it processes from crude oil supplied primarily from the North Sea.

Humber Refinery’s fluid catalytic cracking unit/thermal cracking/coking configuration makes it the most complex in the UK, and its only coke producing refinery. Its two coking units and associated calcining plants upgrade the heavy bottoms and imported feedstocks into light oil products, and specialty graphite and anode grade petroleum coke. “Our operation allows us to convert 100 per cent of a barrel of crude oil into valuable product,” explains Darren Cunningham, General Manager of the Humber Refinery and UK Lead Executive of Phillips 66, the energy manufacturing and logistics company that also operates 11 refineries in the United States.

“When it comes to the two types of petroleum coke that we make here, we are Europe’s largest producer of anode grade coke, all of which is exported for use in the aluminium smelting industry, 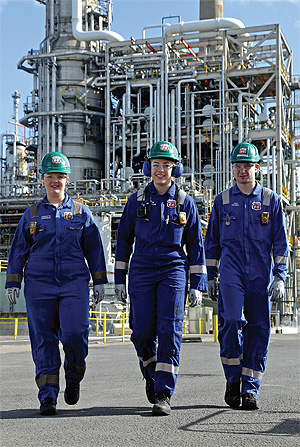 and a world scale manufacturer of graphite coke,” Darren continues. “The latter is a highly specialised, high purity form of carbon that traditionally was used to create graphite electrodes used in electric arc steelmaking, but more recently has also been widely used in the manufacturing of lithium ion batteries for consumer electronics, for use in mobile phones, and now in electric vehicles. The graphite coke we produce has displaced natural graphite due to its superior electrical properties; we work closely with the battery manufacturers to specifically tailor make grades of coke that are suitable for different applications.”

Creative opportunities
Where the UK had once had 19 operating refineries, only six remain, and this has given rise to a belief, amongst some, that oil refining is something of a ‘sunset industry’. To Darren, however, this is most definitely not the case, and he argues that evidence of how the industry continues to evolve and pursue new opportunities is there for all to see. “The manufacture of coke is a unique example of how we have been innovating, changing our processes and entering new markets that simply did not exist several years ago,” he states.

The Humber Refinery has also utilised the creative minds of its team to respond to the issue of converting waste oil into fuel. “We have been working very closely with the Environment Agency and the Department for Transport to identify a way of taking waste oil from other sources and processing it through one of our refinery units in order to make petrol, diesel and LPG products that can be sold on the open market,” Darren reveals. “We are using this waste product and recycling it to manufacture biofuels. We will continue to look for ways in which we can build our capabilities in this area.”

£1 billion investment
With a plant that covers more than 500 acres, it goes without saying that operating the Humber Refinery is a hugely capitalintensive activity. Plant integrity requires continuous investment, and since 2005 alone, Phillips 66 has committed over £1 billion to the Humber Refinery. “As an individual and as a company, our number one priority, every day, is safe and reliable operations. As owners of multiple refineries, Phillips 66 knows what it takes to keep its assets in top condition, and to operate above and beyond regulatory standards. Investment in the refinery has been constant since its first day of operation, and this has been absolutely vital in our ability to stay competitive in that time,” explains Darren.

Talent pipeline
As well as spending vast sums on its infrastructure, machines and processes, Phillips 66 continues to invest heavily on its personnel, with over 700 permanent employees and almost 400 regular contractor staff. “We work very hard to attract and retain the best talent available, as they are the foundation for our success,” Darren adds. “This begins with an outreach programme we have with local junior schools, where we bring pupils on site at an early age to provide hands on engineering and science experiences, and extends to our relationship with the local, secondary education establishments, such as Engineering UTC Northern Lincolnshire.

“It is our hope that the students with whom we interact through these activities will be inspired to consider jobs in our industry, and possibly join us, either from University or via our four-year apprenticeship programme. We see this as a key talent pipeline from which we can bring critical skills into the business, while providing first-class training and development opportunities. We also continue to take great strides in encouraging women into manufacturing and engineering careers, and our track record for recognising female talent speaks for itself, with the Humber Refinery employing over twice the national average of female engineers.”

As Darren previously stressed, one of the key areas of focus going forward will continue to be on delivering safe and reliable operations each and every day. Further to that, the refinery will continue to innovate to produce the products needed to fuel our lives and to adapt to changing markets. “I believe that we have an important role to play in both the local and national economy and we will continue to engage with the government and various regulatory bodies, in particular as to how we can play our part in developing an electric vehicle supply chain in the UK, which is part of the Government’s recently published industrial strategy.”