Committed to the future

Built in 1896, Phillip 66’s facility in Rodeo, California, was the first major oil refinery to be established in the Bay Area. The Rodeo facility now operates as an integral part of the San Francisco Refining system which has two facilities linked by a 200-mile pipeline.

The Rodeo facility initially operated in an area of 16 acres and processed approximately 1600 barrels of crude oil per day. Today, the Rodeo facility covers 1100 acres and has a crude feed capacity of 120,000 barrels per day operating in conjunction with the Santa Maria facility. The Santa Maria facility located in Arroyo Grande was built in 1955 and operates on a 1789-acre site.

The San Francisco Refinery processes a mixture of heavy, high-sulfur and light sweet crude oils, receiving California crude oil by pipeline, and both domestic and foreign crude oils by tanker. Semi-refined products are sent from Santa Maria by pipeline to Rodeo for upgrading into finished petroleum products, with a large portion of the refinery’s 4.3 million gallons per day production ending up as transportation fuel such as gasoline and diesel. Process facilities include coking, hydrocracking, hydrotreating, and naphtha reforming units.

“Phillips 66 San Francisco Refinery is responsible for producing around 12 percent of the diesel currently consumed in California, and about six percent of the total amount of State’s 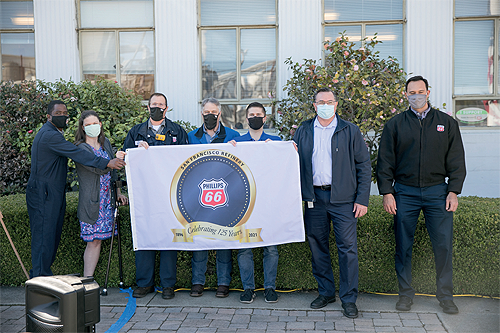 gasoline usage,” begins Refinery Manager, Rich Harbison. “With some 480 employees working directly at the Rodeo facility, and roughly 300 contractors present on site each day, the Rodeo facility itself has two primary operations, the first being its refinery activities, and the second the calcining of petroleum coke.

“The facility was originally built to produce kerosene and fuel oil as primary products. It wasn’t until the use of the internal combustion engine really took off on the West Coast of the United States in the late 1910s-early 1920s that the facility began producing more gasoline than kerosene. This marked a real transformative period for the business, taking the refinery from being a predominantly fuel oil producer for heating and lighting applications, towards a diesel and gasoline producer for transportation fuels. Ever since then, the facility has steadily grown in size and scale, adding calcine coke for speciality markets to its repertoire.”

For the Rodeo facility, 2021 represents a major milestone anniversary, with it celebrating its 125th year in operation. To mark the occasion, Phillips 66 commenced with a year-long celebration in February 2021, first by raising a commemorative flag outside of Rodeo’s administration building. At the same ceremony, the refinery’s leadership was presented with a plaque honouring the facility as an integral part of the community for the last 125 years by the Bay Front Chamber of Commerce, and the refinery’s Community Advisory Panel, which includes residents and representatives from local businesses and agencies.

While this anniversary year will of course see the organization reflect upon its past, it will also continue to help set the stage for the next phase of growth, one that will be heavily defined by Phillips 66’s commitment to a lower-carbon future. “Energy supply is in a constant state of transformation, and the Rodeo facility has been changing and evolving since its earliest days in the late 1800s,” Rich continues. “Our next transition for Rodeo is into the field of renewable transportation fuels. This journey has begun with the successful conversion of our diesel hydrotreater to renewable feed stock, completed in April of this year.” The converted hydrotreater, known as Unit 250, today is capable of producing 8000 barrels per day – 120 million gallons per year – of renewable diesel from a pre-treated soybean oil feed.

A separate project unveiled in August 2020 – labelled the Rodeo Renewed project – proposes to reconfigure the existing hydrocrackers to produce an initial 680 million gallons per year of renewable diesel and renewable gasoline from used cooking oils, fats, greases, and soybean oils, with production of these fuels expected to begin in early 2024. The facility will also have the ability to produce sustainable aviation fuel. The conversion is expected to improve Rodeo’s competitive position and lower its operating costs. Furthermore, it is expected to significantly reduce the facility’s criteria pollutant emissions and enable Phillips 66 to meet its California Low-Carbon Fuel Standards obligations.

Key elements of the Rodeo Renewed project include the construction of pre-treatment units, the repurposing of existing hydrocrackers, and leveraging existing logistical infrastructure to achieve the reconfiguration. “The eventual installation of the pre-treatment units will open up a wide variety of feed stock potential, which we will then aggregate and prepare for processing through our hydrocrackers,” Rich explains. “Upon the successful conversion of our two hydrocrackers to renewable feed stock catalysts, the facility will no longer process crude oil, which will symbolize a significant milestone in the long-history of Rodeo.”

Unlike most refinery configurations which tend to include a single hydrocracker, Rodeo process equipment is uniquely positioned with two hydrocrackers. These are the key conversion units to make renewable fuels. This unique characteristic will help to ultimately position the site as one of the largest renewable fuels facilities found anywhere in the United States once it goes fully operational in early 2024.

Rodeo Renewed will also play a critical role in supporting the State of California’s growing demand for renewable fuels, and help meet its wider low-carbon objectives. “Here in California, 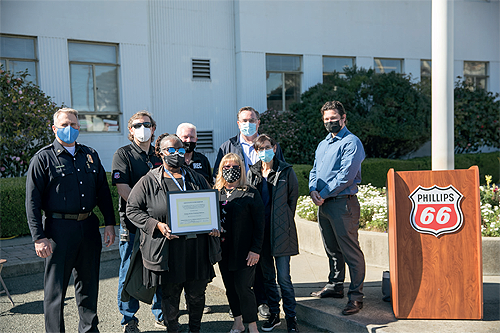 The journey towards making Rodeo Renewed a success also comes at a momentous time for Phillips 66 as an organization. For it, 2021 marks the year that it officially ushered in new, long-term commitments to building a lower-carbon business platform and to advancing its strategy with financial discipline. To this end, it launched a new entity at the start of the year, dubbed Emerging Energy, whose focus is on commercializing and implementing emerging energy technology within Phillips 66’s operations and portfolio of assets. “The ultimate goal here is to have an Emerging Energy business that will stand beside our Midstream, our Chemical, our Refining, and our Marketing and Specialities businesses,” commented Phillips 66 Chairman and CEO, Greg Garland, at the time.

“The words and actions of our leadership further highlight the strong push that Phillips 66 is making to be a part of the world’s efforts in energy transformation,” Rich enthuses. “We are doing so in a number of ways, one being through the formation of the Emerging Energy group, which we all expect to become a much larger part of Phillips 66’s portfolio as we move forward. Another element to this is our Energy Research & Innovation organization at the Phillips 66 Research Center in Bartlesville, Oklahoma. With this, we are one of, if not the only downstream company to operate a full research center, which is where we are actively exploring all manner of emerging technologies, including battery technology, hydrogen production, electrolysis, different types of catalysts, and various processing techniques that we believe have the potential to further reduce the carbon intensity of our fuels, and in turn the energy powering the economies of the world.”

Further proving that the idea of sustainability and corporate responsibility runs especially deep within Phillips 66 and its San Francisco Refinery, a number of other projects and initiatives can currently be found gathering pace that will enhance its environmental credentials. These include evaluating the installation of a solar power array capable of meeting a portion of the refinery’s electrical needs.

When discussing some of the work that Rich and his team have undertaken in the last year or more, it is important to re-emphasize that it has occurred during the midst of the Covid-19 crisis. Discussing said period of time, Rich clearly couldn’t be prouder of the business and its people. “In my opinion, our people have always been extraordinarily resilient when it comes to meeting challenges head on, and that has only been reinforced exponentially since the onset of the pandemic,” he declares. “Throughout it, we have been able to react and adapt quickly and appropriately in order to continue producing the necessary transportation fuels that serve the marketplace. At the same time, the wider Phillips 66 organization has successfully adapted how its people are able to interact with one another, changing the way they communicate through the use of technology, which has also aided in preventing the exposure to, and transmission of, Covid-19.”

During the course of the first six months of 2021, Phillips 66 San Francisco Refinery – and its Rodeo and Santa Maria facilities – found itself moving through what everyone hopes will have been the last phases on the road to a full recovery from the effects of the pandemic. It is having to do so, however, whilst also shepherding Rodeo through the early stages of the momentous, multi-million-dollar transformation from being a traditional refinery to becoming one of the world’s largest renewable fuel production facilities.

“This facility has a proud legacy of producing energy and transportation fuels for 125 years, and our effort to reconfigure the facility is really all about ensuring that these endeavors continue for many more decades to come,” Rich adds. “Additionally, the facility is responsible for providing people with good, rewarding careers, and we place a great deal of emphasis on providing opportunities for men and women to earn a healthy primary wage. That is something I also want to see continuing long into the future, which in turn solidifies the refinery and Phillips 66’s standing as a trusted member of the community.

“With that in mind, the mission that is driving Phillips 66 San Francisco Refinery and its Rodeo facility forward is an unwavering commitment to embracing renewable fuels, reducing our impact on the environment, providing well paid jobs, and being a respected part of the community,” Rich concludes.