Back to Profile Gallery > Pioneer Energy 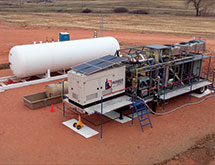 The company deployed its first Mobile Alkane Gas Separator (MAGS) in the Bakken Shale in November with six more units in production. The MAGS captures and converts natural gas that is typically flared off into useable commodities.

“Pioneer Energy is a company that is developing new technology to allow us to capture fossil fuel resources now going undeveloped,” Founder Robert Zubrin explains. “Our key product right now is the MAGS designed to take flare gas and process it into three streams. First, there is dry-transportation quality methane that can be used to replace diesel fuel. Second, there are the natural gas liquids, such as propane, butane, and pentane that can be trucked away and sold away. Finally, there is the ethane, which we use ourselves to power our machine, thereby getting rid of the flare. So we are creating two new revenue streams for operators, while helping them keep their wells going by achieving regulatory compliance, all at the same time.”

Flaring has historically been a byproduct of oil well operations but the upswing in current production has intensified the practice. The combination of gases makes it difficult to harvest without a nearby pipeline.

Zubrin compares the situation to having a plate of gold filings and lobster Cantonese. Both are desirable but not when mixed together.

Ultra Cold
Following a successful demonstration, the first unit was deployed in North Dakota in November. “Things are going pretty good. Our first unit is up and running at the site of one of the top oil companies in the Bakken. It has proven to be very robust and successful. It is making it through the North Dakota winter with flying colors.

“We have another machine coming off the line which is currently being tested for North Dakota with additional machines to be produced in the months March, April, May, June and July,” Zubrin says. The system is controlled remotely from Pioneer Energy’s manufacturing, research and development facility in Colorado. The company also staffs an operations office in Stanley, N.D.

The machine is quite unique. “All gas processors work by first compressing and then refrigerating, but our machine has ultra-cold temperatures of negative 80 centigrade,” Zubrin says. “No other mobile system currently goes below negative 30. We knock practically all the liquids out of the gas which is why it’s ultra-high quality and directly usable transport-quality natural gas.”

Pioneer Energy is being contacted by companies around the world about its technology. It has been approved by the Export-Import Bank of the United States, allowing for easier international deal-making, with an 85 percent loan guarantee via the U.S. federal government.

Regulatory Requirements
Despite a decline in energy prices, market conditions are favorable for the company, Zubrin explains. Government regulators have begun to outlaw flaring to protect the environment. For example, North Dakota recently approved regulations calling on oil companies to begin to address flaring and others are following suit. “Regulators are moving to compel companies to do something about flares and we are offering a way to make money while they do it,” Zubrin says.

Some regulations call for capture of at least 60 percent of carbons in flare gas while other proposals are more stringent with the potential to severely limit or close a well operation. “We allow them to address this not as a cost but as a source of profit,” Zubrin states.

Lower energy prices also play to Pioneer Energy’s strengths as producers wish to maximize every potential revenue stream. “When oil was $100 a barrel, there were those who didn’t care about using flare gas to make money,” Zubrin says. “There is about $15 per barrel in that flare gas, if you put it to use our way, though it could be more or less depending on conditions. When you are making $100 per barrel, an extra $15 would be nice but you could do without it. However, when it’s $45 a barrel, that extra $15 counts for a lot more.”

Zubrin was originally an aerospace engineer for Lockheed Martin and NASA. About a decade ago, he began applying his innovations to the oil and gas sector and earning patents. The MAGS system is not the only trick he has up his sleeve, either, but it is most notable as it is an excellent example of transforming a waste material into a resource.