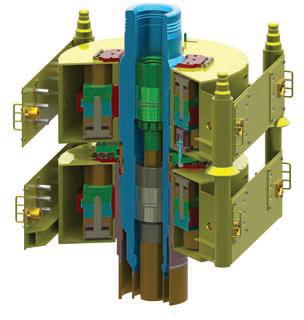 With its POS-GRIP® friction grip technology wellhead equipment in use on more than 300 wells worldwide, Plexus has become a leading name when it comes to delivering innovative equipment and services to the oil and gas, engineering and service industries.

The company was admitted to trade on the London Stock Exchange AIM market during December 2005, and is headed up by its founder and CEO Ben van Bilderbeek who is an accomplished engineer with 35 years of industry experience. It was van Bilderbeek who designed, developed and ultimately commercialised the POS-GRIP system, which was first patented in 1997.

Since that time the proprietary technology has become an industry leading solution in surface wellhead design, delivering a number of innovative safety and operational benefits particularly for unconventional high pressure high temperature (‘HP/HT’) applications. Following a number of high profile incidents in the field, and in particular the 2010 blowout in the Gulf of Mexico there is a growing demand and need for better and safer innovative technology and solutions both for the surface and subsea, and in a statement van Bilderbeek said: “Recent well control incidents around the world have highlighted the need for robust, high performance, subsea wellheads in oil and gas operations, particularly in extreme and hostile environments.

“Specific functionality is being demanded such as instant casing hanger lockdown, long term metal-to-metal sealing, and the ability to monitor sustained casing pressure and then enable remedial action and bleed off capability.”

POS-GRIP wellhead technology supports tubular weight and activates seals through the application of elastic deflection to an outer wellhead body onto an inner casing or tubing hanger, to lock the system into place. During surface wellhead operation the system is powered by reusable hydraulic devices, which are fitted temporarily to flanges on the outside of the wellhead. The system was first introduced to the North Sea as a flexible rental wellhead system for jackup drilling operations.

The technology has been successfully operated for 12 years, particularly for HP/HT wells. As the oil and gas industry is forced to move into increasingly extreme environments, to contend with a growing demand for oil and gas products, Plexus has continued to develop POS-GRIP technology. As the product has evolved it has been adapted for specialised wellhead systems and builds on the advantages it has over existing ‘slip and seal’ and ‘mandrel hanger’ technology including enhanced safety, larger metal-to-metal seal contact areas, virtual elimination of movement between the seal parts, fewer components and enhanced corrosion resistance. POS-GRIP also has the benefit of being simpler to manufacture, has a reduced installation cost, a lower unit cost, and increased reliability.

Following blowout incidents like that in the GOM, the JIP was formed at the request of the industry to address new drilling rules introduced by the USA and to develop new safer technologies in wellhead design. Commenting on the progress Plexus is making with the project van Bilberbeek notes: “Inherent in conventional wellhead design are a number of systemic deficiencies, and as a result it is not immediately obvious that in many cases the subsea wellhead is at the heart of well integrity incidents. The difficulties of using conventional casing hanger lockdown solutions I believe lay behind the delays that occurred in controlling the 2010 GOM blowout. Since the accident, it is now against the US drilling rules to leave subsea casing hangers loose in the wellbore and, to meet these new regulations, a more dependable way of achieving ‘instant’ lockdown is being sought, and which will make obsolete the need for problematic lock rings, or lock down sleeves. We believe that our new POS-GRIP HGSS subsea wellhead JIP initiative is uniquely placed to address such issues.” The project has already finalised the main design parameters, and testing of key components is now underway, with full testing planned to be completed by the third quarter of 2014 after which the running of a prototype will be pursued. Any intellectual property resulting from the JIP will be owned the Plexus Group. At present key features of the POS-GRIP HGSS subsea wellhead design include 18-3/4-inch full bore system, rated to 15,000 per square inch (psi) and 350 degrees Fahrenheit and four million pounds of ‘instant’ casing hanger lockdown capacity.

Furthermore, the HGSS will avoid acknowledged problems associated with using lock rings and is working on a feature to provide annulus pressure monitoring and bleed-off capability. The rigid metal annular seal technology is qualified to match the standards for premium casing couplings and the system’s annulus casing can also be opened and resealed to enable remedial cement jobs. The project will exceed the American Petroleum Institutes’ (API) 17/D/ISO 13628-4 recently provided operator requirements, with life cycle testing and wellhead standards that are more stringent than those proposed by API.

Helping the company to achieve greater potential from its IP in the future, Plexus operates Plexus Technologies as the research and development arm of its business. The division assists in the design of new products and manages research and development, and testing. The Technologies division works towards providing the company’s customers with bespoke solutions, as well as looking to improve designs and create new applications that are currently used within the oil and gas industry. The division’s current and forthcoming projects include the HPHT tie back connector, ‘HG’ Wellhead dry tree, ‘HG’ tie back and platform drilled wellhead/welltree, Plexus well-tree and the POS-GRIP riser connector.

Both Plexus and its founder were honoured during 2013 with Plexus winning the ‘Best Oil and Gas Plc’ at the Annual Stock Market Wire Awards, while Ben van Bilderbeek was awarded the prestigious ‘Entrepreneur of the Year 2013’ accolade at Grant Thornton’s Quoted Company Awards. Looking to the future Plexus intends to follow this success by accelerating the roll out of its POS-GRIP technology with an aim for it to become the future best available and safest technology (BAST) wellhead standard within the oil and gas industry for wellhead design.