With its POS-GRIP ® friction method of engineering, Plexus Holdings plc is known for challenging the wellhead market through the delivery of ground breaking equipment that significantly enhances safety and minimises costs through time savings and operational efficiencies. Designed, developed and commercialised by founder and CEO Ben van Bilderbeek, the proprietary POS-GRIP friction grip method of engineering was first patented in 1997 and has since allowed Plexus to become a major force in the North Sea oil and gas industry with an ever expanding global presence. Today the company continues to operate throughout Europe, the Middle East, Africa, South America and Asia.

Key to the success of Plexus and POS-GRIP is the technology’s ability to deliver instant casing hanger lock down and a true metal to metal seal based on real and verifiable science employing Hertzian Contact Stress principals that can withstand movement and which delivers a large seal contact area. Such features are uniquely beneficial for HPHT and corrosive drilling conditions, and allow wellheads for the first time to be tested to the same standards as premium casing couplings.

Not only is POS-GRIP the market leader within the general jack-up exploration drilling wellhead market with a near 100 per cent market share in the North Sea, but it is now proving crucial for clients drilling in more extreme and unconventional environments. With over 40 years of industry experience Ben van Bilderbeek and the company’s directors believe that through the application of POSGRIP technology in wellhead systems, their clients are able to access significant advantages over conventional wellhead design solutions. Depending on the application of the technology, these can include enhanced safety; larger metalto- metal surface areas; the virtual elimination of movement between sealing parts; fewer components; simplified design and assembly; enhanced corrosion resistance; simple manufacture; reduced installation cost; lower unit cost and increased reliability, all of which can be achieved ‘through the BOP’. 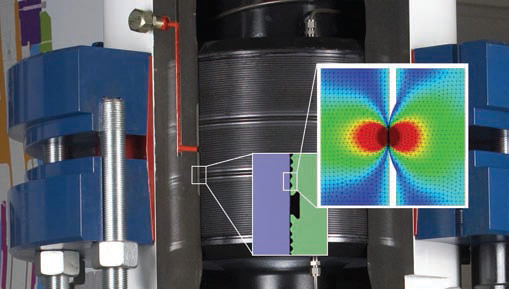 “During the last 15 years we have been able to acquire a very large market share for the HP/ HT sector in the North Sea on the back of POSGRIP technology, which is assembled without the need to remove the blowout preventer (BOP) from the well, even in HPHT situations where metal sealing is an absolute necessity,” Ben explains. “Furthermore owing to the fact that it is not necessary to remove the BOPs, which are heavy and complicated pieces of equipment, which must be re-tested once they have been moved, it is possible to save between 32 and 48 hours every time casing is landed in the wellhead. Rig rates are and continue to remain high, meaning that in addition to improving safety by keeping the BOPs on the well, we also provide massive operational savings for the operator, which can exceed the cost of renting our equipment. This has translated into us gaining a disproportionately large market share for a company of our size.”

The many operational and safety advantages of POS-GRIP technology and its successful use on jack-up applications, led to Shell in Houston in 2011 asking Plexus to form a Joint Industry Project (‘JIP’); to adapt the company’s surface wellhead designs and know-how from the surface to subsea. The JIP’s objective was to develop and commercialise a new and safer subsea wellhead system, based on Plexus’ patented friction-grip technology, to address key technical issues and challenges highlighted by regulators following the Gulf of Mexico incident in April 2010.

The JIP members now include BG, ENI, Maersk, Oil States, Senergy, Shell, Total, Tullow Oil and Wintershall. The engineering and test stages of the Python™ subsea wellhead system are well advanced with the prototype being launched in Aberdeen in September this year at OE2015 (Offshore Europe). The wellhead is designed to be safer, has fewer parts, and delivers instant casing hanger lock down whilst avoiding the use of lock rings and lock down sleeves as required by conventional subsea designs. It has rigid metal-to-metal annular seal technology qualified to match the standard of premium casing couplings and in due course will incorporate annulus monitoring and bleed-off capability to address sustained casing pressure situations, together with diagnostic and remedial capability. The inclusion of these key features and capabilities in a subsea wellhead will be an industry first.

Most importantly, in an industry which is reluctant to embrace disruptive technologies even for technical and safety reasons, the Python subsea wellhead system reduces the number of installation steps needed to assemble the system subsea by as many as ten stages, which offers the potential to generate major savings, particularly when the system is used in deepwater applications where a single ‘trip’ can cost as much as two million dollars.

The advantages and adaptability of POSGRIP technology, which does not involve the use of threads and rotation were further demonstrated in March 2015, when Plexus announced the award of a purchase order to supply its new POS-SET Connector™ to be used by Centrica in abandonment operations off the coast of Holland. The wells were originally drilled in 1982 and this agreement represents the first purchase order secured by Plexus in the potentially lucrative abandonment market. Plexus believes that the abandonment market has significant growth potential as a large number of aging wells reach the end of their operational life in the North Sea and other regions of the world. The total value of the contract, including engineering and testing work undertaken by Plexus is estimated at £0.8 million.

The proprietary POS-SET Connector was developed and qualified by Plexus to allow operators to re-establish connections onto rough conductor casings that have been previously cut above the seabed to facilitate abandonment operations. Testing of the connector has demonstrated that the POSSET Connector can achieve 80 per cent of the bending and tensile strength of the parent pipe, which is far in excess of the performance of conventional alternatives. Furthermore the POS-SET Connector can be deployed in a number of additional applications; including subsea completion operations using subsea tie back wellhead and surface wellhead tie back platform completion.

Commenting on the project, Ben said: “This latest order with Centrica represents another major milestone for Plexus, as it sees us enter a new and growing abandonment market where regulation is increasingly focused on the best available equipment solutions. According to the Department of Energy and Climate Change (DECC), out of the 11,000 plus wells that have been drilled offshore UK, 5000 remain active.”

While Plexus has enjoyed globally recognised success with its POS-GRIP technology, the company remains both passionate about its technology and ambitious to grow in to new markets and sectors. As such Plexus is currently targeting China and the wider Asian market, and has made significant steps in this direction in recent months, as Plexus finance director Graham Stevens elaborates: “As part of the Plexus China and Asia strategy we recently announced the signing of a significant framework agreement with a major Chinese company. As a framework agreement it hasn’t completed yet, but it expands on the company’s Asian strategy, which extends to Australia, Brunei, China, Malaysia and Singapore. These are all regions that Plexus identified two years ago as areas of activity that are expanding and can be of major importance to Plexus in the coming years. This latest Chinese framework agreement is designed to accelerate that strategy and as part of this global strategy we are also looking at Russia and CIS market opportunities.”

The China framework agreement was signed with Yantai Jereh Oilfield Services Group Co., Ltd. (Jereh), the major Chinese oil services provider of integrated solutions of oilfield equipment and services. The two parties will now work together to formalise a binding license agreement to enable Jereh to manufacture and sell Plexus’ wellhead equipment to the Chinese and wider Asian oil and gas markets. Jereh is a public company listed on the Shenzhen stock exchange with a market capitalisation of over $5.8bn and 5000 employees. The agreement was made jointly by Kunxiao Wang, president and co-founder of Jereh and Ben van Bilderbeek, at a signing ceremony at the 15th China International Petroleum and Petrochemical Technology and Equipment Exhibition (CIPPE) in Beijing during March 2015. “I am delighted that Plexus and Jereh have entered into the Agreement, which we hope will enable us to bring Plexus’ POS-GRIP technology to the important and growing Chinese market and other relevant Asian territories,” Ben says. “We view China and Asia as one of the key global market opportunities for Plexus and we believe that our POS-GRIP wellhead equipment will deliver operational time savings and safety benefits to the oil & gas companies operating in the region, many of whom will be facing HPHT conditions that POS-GRIP technology is uniquely able to address.”

In line with the company’s continued expansion, it was announced in September 2014 that Plexus had expanded the size of its Aberdeen operational headquarters. Through the acquisition of a 36,000 sq. ft workshop and office facility at the cost of £2.4 million, Plexus effectively doubled the size of its Dyce base. The new facility lies immediately adjacent to Plexus’ existing 36,500 sq. ft site in Aberdeen and was previously occupied by leading oilfield services company Baker Hughes. Commenting on the acquisition Ben said: “This is a significant milestone for the company, which sees Plexus effectively double its working facilities at its headquarters in Aberdeen. Importantly, Plexus was able to achieve this with minimal disruption to daily activities around on-going operations. We believe this investment will play an important role in the company’s future strategy as an innovative technology-led business that is committed to making significant inroads into the global oil and gas wellhead equipment market.”

Following on from a history of market-leading design and impressive market penetration, the future looks equally as bright for Plexus as it continues to extend the benefits and advantages of it POS-GRIP technology to clients in new markets and regions across an increasing range of applications. “The strategic vision for Plexus is to expand the POS-GRIP method of engineering for the betterment of the quality and safety of wellhead and related equipment used on land and in offshore and subsea drilling for oil and gas around the world,” Graham concludes. “We believe that this is a very clear objective. We are focused on doing business where we can make a real difference with our superior technology and become a new wellhead standard. We are confident that the scope of what is possible is so sizeable that it will be many decades before we run out of POS-GRIP product development opportunities – if at all.”