Plexus Holdings plc is a company founded on innovation, challenging the market to change the future of wellhead safety and operating standards.

In 1997 it secured a patent surrounding its pioneering friction-grip method of engineering, POS-GRIP®. The innovative method provides a unique and patented method of gripping and sealing casing in a wellhead which is safer and quicker to install than existing conventional wellhead technologies, and which results in significant time savings and therefore cost reduction.

In a recent interview, CEO Ben van Bilderbeek and finance director Graham Stevens revealed the subsequent work undertaken towards further developing the POS-GRIP method of engineering, and extending its range of applications, particularly for subsea fields. “There are particular scientific principles that must be adhered to in the provision of metal-to-metal sealing, necessary on subsea wellheads.”

When drilling on land, the wellhead is easily accessible, but in the deepwater climate of today’s subsea drilling activities, which can be located 12,000 feet beneath the surface such access is simply not possible. The seal is key to the integrity of the well and must prevent pressure from the smaller diameter high-pressure pipes from reaching the larger pipes, which have a lower pressure containment rating.

“These annular seals have to last the entire life of the well so the seal is absolutely critical to long-term survival of a subsea well,” points out Ben. As the industry moves from operating at 10,000 PSI to pressures of 20,000 PSI in regions such as the Gulf of Mexico, the North Sea, offshore Malaysia, Indonesia and the Arctic it is widely recognised and accepted that elastomeric seals are unacceptable. “The general standard recognises the use of metal-to-metal seals. The challenge lies in implementing the sealing effectively when you are 12,000 feet away from the section.

“As we progress through the development of a new class of subsea wellhead systems based on the friction grip method of wellhead engineering, we have studied very carefully what circumstances one has to create for a metal-to-metal seal to work, and work for the life of the well. It is these circumstances that we have started to identify as the key to delivering a system that, with a degree of science, can claim to provide metal-to-metal sealing, which is so critical to the whole process,” he adds. 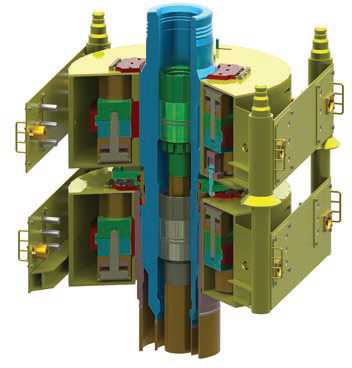 The key to using metal-to-metal seals at high pressure and high temperature in a remote application is being able to deliver a known amount of force to the areas of interface between the inner pipe and the outer pipe. “You need to know exactly how much force you deliver and it has to be sufficient at the interface between the casing hanger, the end fitting to the inner pipe, and the well head housing, the end fitting to the outer pipe. The right force must be delivered at the point of contact so that the metal seals are energised. If too much force is applied then the resilience of the metal will be lost, deforming permanently. If there is too little stress then the fluid will leak by. There is a narrow band of stress that must be delivered so the deployment of the gripping force that delivers the force to the interface has been very closely controlled, managed and recorded,” explains Ben.

During the initial phases of product development POS-GRIP technology was created as a method of supporting oil field tubulars with an externally activated radial friction grip. Its first major application within the oil and gas industry was through the introduction of an adjustable rental wellhead system for jack-up exploration drilling. This consequently led to the product development in the specialised high pressure and high temperature of HG production wellhead systems with all internal parts qualified to 20,000 PSI.

In 2010 Plexus launched a joint industry project (JIP), working with oil and gas operators developing a new subsea POS-GRIP wellhead design. Commenting, Ben says: “Our system hydraulically delivers the gripping force with a known amount of pressure. This is delivered to the interface between the wellhead and the casing hanger by means of a precisely controlled, measurable and specifiable friction grip force. We believe that we can deliver this technology with the same efficiency and effectiveness, but with even more significant time savings than we have achieved on the surface with jack-up rigs. Over the last 15 years we have completed 350 wells, and the focus of the subsea JIP is to make the external gripping work under water.”

A major milestone for the business was reached in May 2014 when all the partners from the JIP contract met with Plexus in Aberdeen to inspect the equipment currently in its test facility. “We believe that the connection in the wellhead must be as good as any other connection currently tested to a much higher standard. Leading the way forward we have, we believe, uniquely qualified the casing hanger and wellhead interface to exactly the same standard as that of the premium couplings used in the well,” highlights Ben.

Plexus Group has been responsible for the change in global drilling standards in the oil and gas industry through the ongoing delivery of innovative equipment and services. “As our subsea JIP continues to develop and our scope of thinking changes, feedback from industry plays a significant part in that,” says Graham. “In the past year ENI and Total have joined the project. The eventual design will have had the input and support of this formidable set of international oil and gas operating company partners,” he concludes.