The takeover was motivated by PNS’ desire to expand its presence in the vibrant South East Asia region and made successful by the organisational synergies that existed between the two businesses. Both were close knit organisations run like a family business and this environment has carried forward into PNS Asia Pacific’s activity in the oil and gas sector today. A strong team has led to the delivery of respected pipeline testing and flange management services that have been utilised by some of the region’s biggest upstream operators.

“Exactly what we do can be categorised as precomissioning services,” says the organisation’s director Peter Smith. “That means nitrogen and helium integrity testing, hydro testing, air pneumatic testing, online ultrasonic valve testing, bolt torquing, and bolt tensioning. We specialise in areas such as LNG cooldowns that, in South East Asia, are today a rapidly growing market. Another area of specialisation for us is string testing, used when commissioning compressors; this involves mixing inert gases to produce a specific combined molecular weight, which enables a gas compressor to be function tested to simulated live conditions. This requires expertise in blending different quantities of nitrogen and helium to provide the specific mass required.” 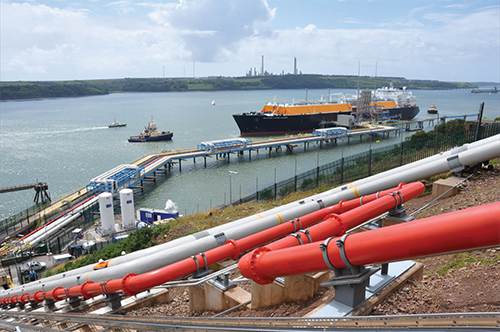 In addition PNS is also heavily involved in industrial services, providing such expertise as reactor rapid cooldowns to the refinery industries, for example.

PNS Asia Pacific’s senior management team has more than a century of combined experience in this area of the oil and gas industry. The company is proud to possess, however, a proactive workforce that brings individual experience into the working environment. Tight vertical integration means that every employee, for example, has the right and responsibility to highlight bad practice when they see it. Such an approach has been appealed to and been appreciated by the company’s clients, and is one of several reasons why PNS Asia Pacific has gained the custom of major names such as SBM, ExxonMobil, and Shell. PNS Asia Pacific’s employees have this integrated awareness developed throughout their entire career.

One upcoming project that Peter is keen to highlight is PNS Asia Pacific’s attachment to Malaysia’s first ever Jetty Regas Unit (JRU) offloading facility being built by the country’s national oil and gas operator, Petronas. “Through our connections with Linde Malaysia we have secured the contract to perform the cryogenic cooldown for bringing the first ever LNG delivery to the facility,” he says. “We expect this to occur sometime at the end of 2012 or early 2013.” The JRU itself is located three kilometres offshore Melaka and is designed to simultaneously berth two FSU’s as site storage facility and offload two LNG tankers, also to provide LNG vaporisation with gas export to the shore facility. When in full production the facility can handle 3.8 million tonnes per annum. It is an impressive design and a credit to the people of Malaysia.

“Linde Malaysia is just one of our strong long-term relationships,” Peter continues. “We also work closely with NOX, with which we have worked on a lot of projects. There is business activity in Thailand, Indonesia, and the free trade zone of Batam, pretty much anywhere in the Asia Pacific that has LNG operations or fabrication facilities to support the growth. PNS Asia Pacific is a relatively small company but we have a huge amount of LNG expertise that has made us one of the sector’s leaders whilst continuing to have an approachable ‘face’. This is highly beneficial because LNG is the single most up and coming area of oil and gas production throughout Indonesia and Malaysia.”

Being based in Singapore has been a huge benefit for PNS Asia Pacific and Duplex Energy before it. Of all the countries in the region it is the most developed toward upstream oil and gas business, providing companies with the infrastructure and resources needed to excel in the market. Nonetheless the same challenges face businesses here as in any company in any area of the world: namely, the demands placed on value by customers. Every client is looking for the highest quality but often the highest quality requires a higher cost than might be viable. PNS Asia Pacific has met this challenge by picking its contracts carefully, taking on only projects that will be safe and reliable, whilst making full use of its close knit team to streamline efficiency.

As the local LNG market continues to boom, being able to offer reliability and efficiency will be key in promoting PNS Asia Pacific to potential clients. Its location on the Singaporean headland is viewed by the company as an equally important quality as well. “One of the main advantages of being here is that it’s very easy to move from Singapore to other countries in the Asia Pacific region,” Peter explains. “Ideally it is obviously better to have bases with equipment sitting geographically near to our clients but that is not always cost effective because of the large capital required. As the market changes so will we, and the flexibility of our organisation means we can do that with ease, and our central location is an important factor in that.”

As the LNG market in South East Asia continues to boom, PNS Asia Pacific is not only ideally located to capitalise on the opportunities available, but also well experienced and fully equipped to do so. With the upcoming JRU project on the books and several organisational developments in the pipeline, the company is already guaranteed a bright future so long as it can continue along the path it has already laid for itself. That is where Peter comes in. “I foresee PNS’ activities in Asia Pacific will likely double and even treble in size within the next two years,” the director predicts. “One of my objectives here is to maintain the standards and quality of our business as well as the camaraderie of our team. I inherited the legacy of having a professional and proactive workforce, from our former MD, Jan Ridler, who sadly passed away in February last. Our workforce is by far our biggest and most valued asset and it is my objective to build on the strong foundations I have inherited.”