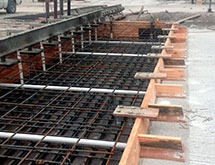 The old maxim of selling pickaxes during a gold rush instead of taking a chance with a mine is being practiced by Port Aggregates Inc. as its business supplying limestone for oilfield roads, precast concrete for oilwell pads in marshes and ready-mix concrete booms. President, CEO and co-owner Andrew Guinn Sr. calculates that producing 550,000 cubic yards of ready-mix concrete and 1 million tons of limestone annually for the energy and construction industries makes Port Aggregates the largest ready-mix producer and limestone distributor in southwest Louisiana.

Port Aggregates has 125 ready-mix trucks, 40 trucks that supply aggregate and bulk haulers of cement and ash, and 27 sites where aggregate is distributed, of which 21 have ready-mix plants that are part of the company’s subsidiary called PAI Ready-Mix LLC. Precast concrete from another Port Aggregate subsidiary, PAI Precast LLC, is used to construct oilwell platforms in marshes or on inland waterways.

Precast Well Platforms
“Sometimes, companies drill a well off a barge, and at that point, they drive pilings and put a concrete platform there,” Guinn explains. “We build those platforms in precast sections at our plant in Jennings, La. They are put on barges and shipped out to these water locations. We’ll block out a section where the well comes through that is sealable so they can capture all the rainwater and run it into a holding tank where it is treated or separated to keep any oil from going into the natural water system.”

The pilings might extend from 6 to 8 feet above the water level. Caps are set on the pilings and the precast concrete slabs on top of the caps. “We can build platforms as big as 5 acres and as small as 200 square feet,” Guinn says. “It’s whatever they want. We build them in sections, and the sections are placed. We have tie-bolt systems that go through the slabs. The tie-bolts are tightened up, and the slabs are pulled together to make one solid slab. They can be sealed with a sealant that is not susceptible to any type of petroleum-based products, so it doesn’t melt the seals or anything else. Once you seal it, it’s sealed. They are pliable, so they move with expansion and contraction for heat and cold. They make a waterproof container.”

Gravel Roads
Port Aggregates distributes white and gray limestone from Vulcan Materials. Two grades – a base course called mudrock whose individual stones measure approximately 1 inch by 4 inches – and a top layer with finer stones called inch-and-a-half minus are used to pave the roads. The output of oil or natural gas from a well determines how often Port Aggregates has to truck out more limestone for the well operator to repave the road.

“For the majority of those well sites, the petroleum product is hauled out by truck, so the roads get under pretty good stress,” Guinn notes. “What’s so beneficial to us is that when an oil company puts in a road and then has a well, even if the well goes down, generally it’s on a farm or a ranch. The farmer at that point most likely will take up the road. He doesn’t want to get rid of it – it’s access into his property. They have a lot of say-so where the roads go, anyway. So he’ll pick up the maintenance on it.

“We have accounts with farmers, ranchers and agricultural people,” Guinn continues. “They might once every five years do just a little bit and patch a few holes and dress it up with tractors and blades. It’s definitely repeat business, which is a big, big portion of our business.” Guinn estimates that 60 to 70 percent of his revenue is from repeat customers. Port Aggregates also supplies limestone for use at coke-burning electricity co-generation plants to produce lime and as a byproduct to scrub the sulfur out of the emissions.

Guinn attributes his success to hard work and long hours. He calculates that approximately $88 billion will be spent in southwest Louisiana on new energy industry facilities during the next 10 years, and Port Aggregates and many other suppliers to the energy industry will benefit. “It looks good for the Lake Charles area,” he concludes.