Back to Profile Gallery > Port of Den Helder 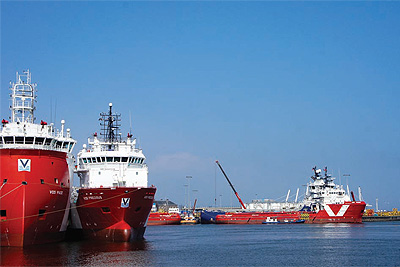 The Port of Den Helder has provided operational and maintenance services to the offshore industry in the Southern North Sea for nearly 30 years thanks to its unique geographical position in the north of Holland. Predominantly serving the Dutch sector of the North Sea fields, the port is responsible for handling a number of services from supplies to replacement crew to 135 production platforms and drilling rigs everyday. Since 2013, under a dedicated and focused management team the port has undergone a process of development to cope with challenging demands and to integrate itself as a strategic player in the local economy.

“We recognised a demand in the market for economic development,” begins Piet-Hein Kolf, CEO of the port. “Before 2013 the harbour was smaller. After 2013 we had more focus on development so we started designing and implementing a business plan that would attract companies to situate here and allowed us to establish strong partnerships with other operators in the area.” By setting out a strategic plan for the port, the company began its journey to expand the economic activities of the port and deliver a better service to its clients. Part of this has been delivered through the opening up and expansion of land for development. 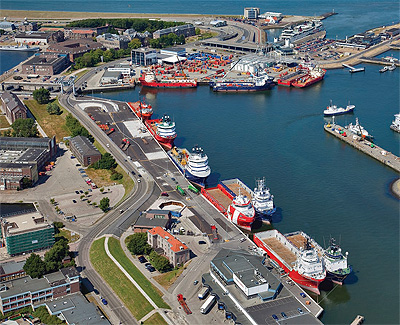 “So far we have opened up the southern part of the harbour and are starting development on the northern side,” continues Piet-Hein. “Ultimately, we want to complete the supply chain within the harbour so that operators can have the best choice to maintain and operate their platforms in the North Sea.” This has so far been realised through the development and expansion of the business areas Kooypunt and inland harbour Kooyhaven, which lay to the south of the seaport. By investing in the location the port aims to offer over 25 hectares of space to supply the challenging demand from businesses that want to locate there and make the most of the area’s unique accessibility to the offshore industry and collaborative economy. Of note, Piet-Hein reports that Total, Damen Shipyards and IMARES have all established in and around the port to take advantage of these opportunities.

Building strong partnerships with other entities in and around the port has also been critical to the port’s recent economic expansion. “One of the first things I focused on was establishing a relationship with the Royal Dutch Navy, who have their fleet based here,” explains Piet-Hein. “We formed an agreement to use their part of the harbour and land to increase the capacity and facilitate more ships and businesses.” In this important co-operation between the two parties, the civilian-military relationship shares not only land and quay space but also unique knowledge and expertise to make the port an even more important strategic hub for the offshore industry.

Similarly, relationships have been forged between the port and the nearby air and heliports. “Before I came, the port and Den Helder Airport worked very separately, but now we have developed a shared, collaborative plan as we both move forward,” highlights Piet- Hein. Not only is the heliport of Port of Den Helder the largest of its kind serving the offshore industry in northwestern Europe, but the airport has significant links that make the area an attractive commercial hotspot. Both the Port of Den Helder and Den Helder Airport mainly service the same business and clients, and as a result of their close collaboration, both clients of the air and sea ports profit and the result is a better and more accurate service package, offering both efficiency and time saving.

As with the port, the airport is undergoing a continuous plan to develop the area and as such is currently establishing a scheduled service between Den Helder and Aberdeen to cement a strategically important link between the two offshore capitals.

By committing to this expansion and development the port of Den Helder and the surrounding area is insulating itself from the significant challenges currently present in the offshore industry. “We are feeling the effects of the reduced oil price,” comments Piet-Hein. “However, on the flipside we have seen new demand for maintenance to rigs that are coming back in, which provides a lot of work to the harbour. As such we had a record year last year and the first half of this year has been very good as well, although I do think this will drop off a bit from now on as oil companies have backed off of their investments for a while.”

Despite the potential threats faced by the oil and gas market, Den Helder’s decision to open up new space and opportunities for new businesses is likely to attract players from the renewables sector and Piet-Hein notes that the emergence of offshore wind farms in the North Sea will be very positive for the existing infrastructure already established in the area. “We are very good at innovation,” he continues. “Finding out what the clients want and need and developing new concepts to facilitate new maintenance and support demands.” 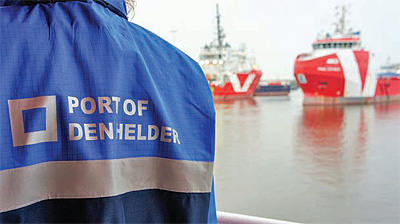 As for the future, Piet-Hein will be leaving the company at the end of 2015, but is confident that the port will continue its journey towards becoming a world-class economic hub for the offshore industry. “Our plan so far has been to establish strategic partnerships within the harbour and the surrounding area, and the next step will be to extend this further by working with national harbours like Ijmuiden, Amsterdam and Groningen; and international harbours like we already do with Esbjerg, in Aberdeen and Stavanger, for instance,” he concludes. “This way we can learn from and support each other in facilitating the needs of our shared clients. Collaboration makes development possible, and the plan for the next ten years and beyond will be to continue this growth and aid economic development wherever possible.”

The future acting CEO of Port of Den Helder, Whitney Veen, will continue the current strategy: “Now that cost-savings and the preservation of volume are the main concerns of the market, it is essential for Port of Den Helder to work together with all of our partners to maintain (financial) stability. Collaboration and creativity are necessary for continued success.”

Whitney is the CFO of Port of Den Helder and has years of experience both in-house and in the offshore sector. She will be leading Port of Den Helder until a suitable successor is found. In the meantime, Veen explains: “It is important for the Port of Den Helder to remain active. It is a crucial time in the market, when Port of Den Helder needs to both facilitate and work together with its various partners. The volatile and dynamic offshore market requires an integrated approach, so that continuity, retention of market volume and implementation of low-cost and low-carbon markets are achieved. My goal is to do this in a way that provides the new Director with a solid base for further strategic actions.”