The initial construction of the Port of Fujairah began in 1978 as part of the economic development of the United Arab Emirates (UAE), and full operations commenced in 1983.

Since then the port has embarked on a continuing process of enhancement to both its facilities and its comprehensive range of functions.

The Port of Fujairah is the only multi-purpose port on the eastern seaboard of the UAE, approximately 70 nautical miles from the Straits of Hormuz. Initially the port was predominately a container transhipment port catering for transhipment to the inner Gulf and the subcontinent. As facilities at these destinations improved, the requirement for transhipment diminished. Therefore, container activity has now been franchised to DPW.

Nevertheless, the Port’s strategic position has remained attractive to both the range of users of the multi-purpose port and the significant numbers of vessels calling at the Fujairah anchorage for bunkers, supplies and services. Today the port has years of experience as a port and terminal operator handling all types of business activities. The variety of activities addressed at the location include: 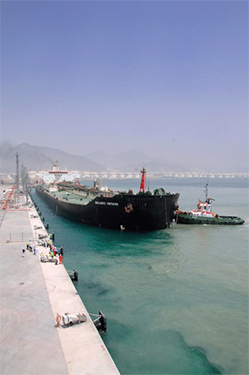 The Fujairah anchorage, initially established during the Iran/Iraq conflict is now an internationally recognised location and handled over 11,290 vessel calls in 2009. It is ranked alongside Singapore and Rotterdam as one of the world’s top three bunkering locations. It provides a range of maritime logistics facilities, and additionally 80 privately owned supply vessels operate from the port.

The export of Gabro (aggregate) to the inner Gulf for building projects has also become increasingly significant for the port. A bulk loader was installed in 2002, and an additional loader with twice the loading rate will become operational later in 2010.

There have also been a number of federal developments related to the location, including new desalination plants (using the Indian Ocean rather than the Inner Gulf) and the Abu Dhabi Crude Oil Pipeline (ADCOP). The ADCOP involves the transport of one to 1.5 million b/d per day via a 360km 48” pipeline. Its also includes 12 million bbl storage, three sub-sea pipelines, a main and intermediate pumping station and three single point mooring buoys for deep water tank loading. This project is currently underway and scheduled for completion in the first half of 2011. A major refinery is also under consideration.

Also scheduled for initial operation during 2011 is a strategic grain reserve that will feature grain silos and load discharge arms on a dedicated berth.

The area of oil product storage is also under improvement, as the port has recognised that commercial companies are moving towards increased storage facilities to cater for trading activity as well as bunkering activity.

When it comes to oil clients, the port already offers a considerable range of services. In ‘Oil Terminal 1’, which was commissioned in January 2006, there are three berths with a draft of 15 metres. The throughput capacity is 15 million ton/year and it can accept tankers up to DWT 110,000 tons.

‘Oil Terminal 2’ is also currently being constructed, which will offer four berths with a draft of 18 metres and a throughput capacity of 25 million ton/year. It will be able to accept tankers up to DWT 180,000 loaded & VLCC loaded, and each berth has 32 loading arms of two sizes (16 and 12 inch MLA.)

Indeed, the maiden call of Oil Terminal 2 occurred as recently as June 2010 when the vessel M/T Brillante Virtuoso made the first visit to the new Fujairah facility.

Captain Mousa Morad, general manager of the Port of Fujairah commented: “Today marks a very historic point for the Port of Fujairah. We have had the first call at our new modern and fully equipped second Oil Terminal 2 and we are handling the highest draft vessel so far received in Fujairah Port facilities.

“Our berths have been built to service the growing number of oil storage facilities being established in Fujairah. This is a progressive and logical movement from our well-established bunkering and trading market. Our strategic location has attracted, and continues to attract, many professional and independent operators worldwide. We continue to assess the requirements for further expansion.”

The Port of Fujairah’s strategic location on the UAE east coast, at the crossroads of shipping lines between east and west is one of the Emirate’s vital facilities. It offers an important hub for activities towards the markets of the Indian sub-continent and East of Africa. The port operators fully intend to continue to build on the benefits of this location and to serve further the industrialisation of the Emirate.