Back to Profile Gallery > Porvoo Refinery

Climate change and the increasing demand for energy are two, often conflicting, trends of modern society, which makes meeting the demands of both a genuine challenge.

Given its long history of developing and producing lower-emission products, leading Finnish oil company Neste Oil is working to address these concerns through the development of cleaner traffic fuels. Both of Neste Oil’s business areas – oil products and renewables, and oil retail – play a contributory role in this strategy.

Refining approximately 15 million tonnes of oil products each year, today Neste Oil produces 255,000 barrels of oil per day throughout its two Finnish refineries – Porvoo and Naantali Though this makes it only moderately sized in terms of global scale, it is nonetheless one of the largest plants in Finland and, importantly, helps Neste Oil develop advanced technology for the country’s energy industry.

Responsible for 200,000 barrels of Neste Oil’s daily output, Porvoo refinery is a semi-big, complex oil refinery located on Finland’s South coast. Neste Oil owns and operates the plant, which has been the company’s central asset since coming online in 1965, and investments throughout the decades have ensured Porvoo remains at the cutting edge of refining technology. When Porvoo launched it was primarily used for the production of crude oil but today bears just a single crude distillation unit with the company having gradually moved into new fuel areas over the years.

Refinery manager Miika Eerola expands upon some of the changes the plant has gone through: “Porvoo refinery has changed a lot since 1965. For example the MTBE plant is now an ETBE unit, a lube oil plant was added, and there is a high-pressure diesel desulphurisation unit. In 2007 the refinery underwent a major 750 million euro investment with the addition of production line four. This is a diesel production line that includes a residue hydrocracker, which allows us to produce sulphur-free diesel from the refinery’s residue oil.” 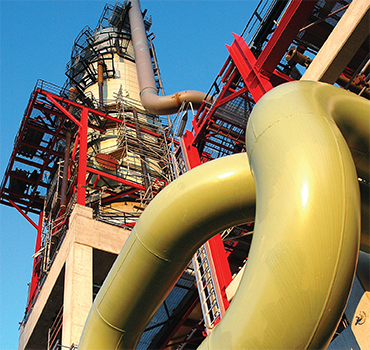 Neste Oil has built a strong track record in the development of lower emission traffic fuels, as the first company to offer unleaded and sulphur-free fuels, as well as biofuels, on the Finnish market. Today the company is the producer of NExBTL renewable diesel, which is the cleanest diesel fuel in the world with a 40 to 80 per cent lower emissions footprint throughout its lifecycle than comparable amounts of fossil-derived diesel.

A genuine breakthrough in the renewable fuel market the NExBTL manufacturing process makes use of hydrogenated vegetable oil and animal fat by-products from the food industry and turns it into high quality, sulphur-free renewable diesel. Additionally, NExBTL diesel can be used in all modern diesel engines without any modification, and in combination with traditional fossil diesel. Innovations such as NExBTL are the product of Neste Oil’s in-house research and development team, in conjunction with Neste Jacobs – a specialist engineering office providing the oil and gas industry with services from feasibility studies to plant start-up – which Neste Oil owns a 60 per cent share in. Once developed, new processes and applications are tested in both a laboratory and pilot scheme, before a commercial scale plant is developed.

In 2007, Neste Oil established a NExBTL renewable diesel plant at the Porvoo refinery, followed by a second similar plant in 2009, increasing the plant’s total renewable diesel output to 380,000 tonnes by the end of that year. “Here in Porvoo, we are responsible for developing and improving the company’s technology,” Miika explains. “With the NExBTL plants, for example, we have proved they work so that Neste Oil can now create large scale units like the ones currently being constructed in Rotterdam and Singapore. Neste Oil has invested 1.5 billion euros over the last ten years into Porvoo’s capabilities, and the new NExBTL units have been commissioned on the back of our success.”

He continues: “There was a deficit of diesel throughout Europe, which prompted our decision to install production line four, which produces traditional diesel, and the NExBTL units, which produce renewable diesel. Utilising our two NExBTL plants, and their pre-treatment units we can use palm oil and other vegetable oils and animal fat, to carry out test runs on new types of raw material. For example we are currently commissioning a high quality jet biofuel that, come springtime, German airline Lufthansa will begin using.” Within this vein, Neste Oil is also taking part in an upcoming joint venture with international wood products company Stora Enso for the construction of a plant where gasified wood mass could be used as feedstock in the production of renewable diesel fuels.

Last year Porvoo refinery completed more than one million contract hours in a major turnaround. Huge investments over the last few years helped to achieve the necessary efficiency, and quality of work in the major turnaround gave good reliability to the refinery. Having undergone these major changes, the next few years for Porvoo look relatively quiet on the expansion front, although the refinery is continuing to invest in environmental systems such as recovering the harbour VOC emissions during loading.

“I don’t see any big investments for Porvoo in the near future but there will be smaller ones of course,” Miika concludes. “There will be, in the next few years, a large wave of retirement both in the plant and throughout the company so we will need to invest in a lot of new staff. We also have ongoing investments into further improving the refinery’s already strict safety standards and leadership quality. Over the next five years I hope we will just continue to improve the quality of our production through hard work and new research.”