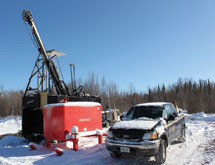 For Kodiak Exploration and Golden Goose Resources, the opportunity to work together as Prodigy Gold Inc. has been an ideal one, President and CEO Brian Maher says. “The two were a good match,” he states.

Before the two came together in January 2011, the firms were in need of a partner. While Kodiak sought a flagship property to develop, Golden Goose had one that needed capital: its Magino mine property, a once-active underground gold mine located near Wawa, Ontario.

After Kodiak learned of the project, it merged with Golden Goose, forming Prodigy Gold. Today, the Vancouver-based firm has additional gold projects, but Magino is its primary focus, Maher says. “That has become the vehicle of growth for our shareholders,” he says.

Located 400 kilometers northwest of Toronto, the Magino property is in an active mining district, Maher says. “Next to us, there’s an operating gold mine called Island Gold,” he says, noting that Magino is estimated to have 6.1 million ounces of resources.

Although the project is now budgeted at $400 million, Maher is not worried about finding funding. “It’s a very attractive project from the credit market perspective,” he says. “We believe we can finance the lion’s share of the project.”

Major Tasks
Currently, Prodigy Gold is in the process of completing the economic analysis and environmental assessment of the project, Maher says. In addition, the company needs to finalize its agreements with the local First Nations community. These agreements will allow the First Nations community to participate in the development of the mine, providing a significant economic impact to the community while respecting the traditional values of the community.

“While each one of those is a major task, those are not insurmountable tasks, being where we are in Ontario,” he states. “[This is] a province that embraces mining. Projects of this size and scale are common.”

He adds that Prodigy Gold is now making arrangements with two First Nations communities near Magino. “Both of these First Nation communities are run by proactive counsel who recognize the importance of economic development and economic capital,” Maher says.

“We reached out to them and they’ve been very receptive,” he continues. “They also recognize that Prodigy will be a good steward for the land.”

Bringing a Boost
Prodigy Gold is considering a large-scale, open-pit mining operation at Magino. “As a consequence, we’ll be employing 250 to 300 people,” he says. “There will be a lot of opportunities for locals.”

Mining positions pay well, which means the local area should see an economic boost, Maher says. “Wawa’s only 45 kilometers away by road,” he states.

Building Blocks
With more than 31 years in mining and exploration, Maher originally served as the president of Kodiak Exploration before its merger with Golden Goose. He also was the exploration manager for the United States, Canada and Mexico at Hochschild Mining PLC, where he supervised exploration and mine development programs, economic analysis of acquisition candidates and developed new corporate strategies.

He praises his employees at Prodigy, particularly its management team. “[It is] one of the things that distinguishes our company,” Maher says, noting that this includes Vice President Fred Mason, who has extensive experience in designing and operating gold mines.

Looking ahead, Prodigy Gold plans to use the Magino mine as “a building block” for its future, Maher says. “We’re taking the approach that this is a business event,” he says.

This will lead to the company’s eventual evolution from a gold explorer to a mining firm with significant gold production, making it a more sustainable business, Maher says.

The next six months, however, also will be spent completing a pre-feasibility study. “That should allow us to begin construction when we receive permits in 2014,” he says, noting that mining will commence in late 2015 and gold production will begin in 2016.

Throughout the process, he asserts, the company will continue to look at other opportunities. “[We want to] build a company that we can all be proud of in the future,” he states. EMI