Back to Profile Gallery > ProPure AS

Possessing patented technologies for the treatment of water, oil and gas, Norway-based ProPure is an expert at translating innovative, leading thinking into practical solutions, with the aim ofreducing operating expenditure for oil and gas companies.

ProPure supplies environmentally friendly purification technologies on an international level, counting sub-contractors and oil operators as its primary customers. “Statoil, Total, ConocoPhillips, Saudi Aramco and Pemex are some of our main clients,” reveals senior vice-president technology Harald Linga. “We’re a global player and have strong activities in the North Sea, as well as in the 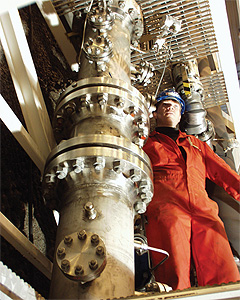 Continuing, Harald explains how ProPure was created: “Framo Engineering and Statoil established the company in 1999, in a 50-50 split. In 2002 Statoil became our 100 per cent owner, and in 2004 Hitec Vision became a part owner, together with Statoil. Also in 2004, Pure Group was established, comprising ProPure and sister companies in the US and Malaysia. An important milestone was ProPure’s merging with CTour Process Systems in 2006. Pure Group was acquired by a Canadian company in 2007, so now we are part of ProSep Inc, which is stock listed in Toronto.”

By becoming part of ProSep Inc., ProPure is one of three central companies, which has led to a more open co-operation with its sister companies – and that includes commercial technologies marketed by its Houston office. ProPure boasts fabrication facilities in Houston and in Kuala Lumpur, via its other sister companies.

Elaborating on ProPure’s remit, Harald explains: “We deliver process components and technologies that provide the customer with added value. That means we can treat gas or crude to the specified qualities with less consumption of chemicals, and with equipment that’s more compact and space saving compared with competing technologies. Added value is key.

“The key component in our technologies is ProPure contactors, essentially mixer units; injection mixers and remixers. We obtain very high mass transfer rates with these components and our main strength is the performance of our processes. For water treatment we deliver a.o. the CTour Process, a technology for treating produced water with very low discharge of oil. Typically for installations, we’re in the range of one to two ppm of oil in water. We operate by combining our technology with commercial separators and improving the performance of the separator units.”

Harald sheds light on new developments in Propure’s R&D endeavours, and their subsequent recognition: “We have qualified two technologies with Saudi Aramco, whereby we have tested – to scale – two pilot units. One is called ProSalt, which is for the desalting of crude, and last May we won the OTC (Offshore Technology Conference) 2009 Spotlight on New Technology Award for this. 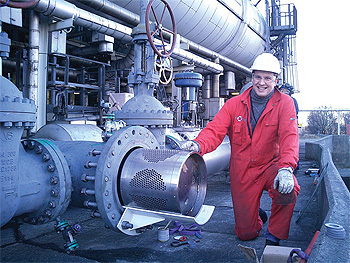 The award required the technology to be innovative and to have a major impact on the industry.”

The Spotlight on New Technology programme provides exhibitors with an opportunity to showcase the latest hardware and software technologies to the attendees at OTC, the world’s largest event on the development of offshore resources. Winning technologies must be less than two years old, original, groundbreaking, and capable of revolutionising the offshore exploration and production industry.

This successful qualification demonstrated substantial reductions in pressure drop, reduce wash water consumption and a superior oil/ water separation. As a follow up project, ProPure is testing the savings that a similar mixer system – ProMix – can have in crude streams where demulsifier is injected.

Harald continues: “Another unit we are qualifying is a gas dehydration device called ProDry, which is an inline technology for removing water vapour from natural gas. We’re running pilot tests as a joint industry project (JIP) in the south of France.” Building on ProPure’s enduring experience with co-current contracting, the JIP comprises ConocoPhillips, Total and Statoil, and addresses the potential of gas dehydration with the ProPure contactor. The contactor is an inline injector, which is widely used for H2S removal from gas using amines or scavengers, replacing contacting towers. This approach cuts operating expenditure related to chemical consumption, storage and handling.

Discussing another noteworthy activity, Harald adds: “We are working together with a company called SorbWater Technology, developing a technology for produced water treatment, which has very attractive features. The SorbSep GFU can be used as a stand-alone unit that meets the strict requirements of oil-in-water content. When combined with CTour or the environmentally green flocculant Sorbfloc, its efficiency exceeds conventional induced gas floatation units by achieving outlet oil-in-water content below five ppm.” In terms of ProPure’s ambitions, the organisation wants to provide packages that meet all its clients’ needs, as Harald explains: “We seek, as a first basis, to establish alliances with technology companies that possess complementary technologies that, in a way, boosts our business. An example of this is our co-operation with SorbWater, where we have engaged its competence and proprietary technologies. Our goal is to be renowned in the treatment equipment market and improve the quality of both produced water and crude oil.”

ProPure AS
Services: Separation and treatment of produced water, crude oil and gas