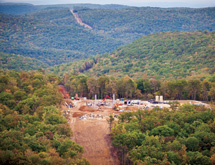 With a tumultuous economy, it is a good strategy to not have all your eggs in one basket. This has kept the Radnor, Pa.-based PVR Partners LP strong even as some parts of the energy and power industry have experienced slowdowns, Mark D. Casaday says. “We haven’t seen much of a change,” he says about PVR’s midstream businesses.

Casaday, who is the executive vice president and chief operating officer of the company’s midstream business, says PVR’s history goes back to 1882, when it owned and leased coal reserves. In 2001, the firm became a publicly traded partnership and in 2005, it entered the natural gas midstream industry when it purchased gathering pipelines and processing plants in Oklahoma and Texas.

When Casaday joined PVR in August 2008, he had the goal of developing midstream assets in the Marcellus Shale in Pennsylvania. “At the time, it was a developing shale play,” Casaday recalls. “The order of magnitude was unknown at that point.”

Today, PVR moves 1.1 billion cubic feet of gas per day and employs a staff of 270 in its midstream organization. The company also has major offices in Dallas; Kingsport, Tenn.; and Williamsport, Pa.

Last year, the company ended 2012 with a natural gas processing capacity of 460 million cubic feet per day, and more than 4,700 miles of gathering pipelines. Casaday adds that the company is worth $4.8 billion.

The growth is largely due to the fact that PVR was one of the first to focus on the Marcellus Shale. “We had the first mover advantage in an area that has the best natural gas reserves in the world,” Casaday recalls.

Additionally, PVR also has coal reserves, which are located in mine seams in Central and Northern Appalachia, and the Illinois and San Juan basins. As of Dec. 31, the company says, it has approximately 871 million tons of proven and probable coal reserves.

The Right to Mine
PVR adds that it also enters long-term leases with experienced, third-party mine operators and provides them with the right to mine coal reserves in exchange for royalty payments. “We do not mine coal ourselves, but we do actively work with our lessees to develop efficient methods to exploit our reserves and to maximize production from our properties,” it states.

Typically, PVR says, a lease will expire when the leased reserves are exhausted, or due to a five- to 10-year base term, with the lessee having the option of extending the lease for five years or more. “Substantially, all of our leases require the lessee to pay minimum rental payments to us in monthly or annual installments, even if no mining activities are ongoing,” the company says.

The firm notes that it also earns revenues from other land management activities, including selling standing timber, leasing fee-based coal-related infrastructure facilities, and collecting oil and gas royalties from coal transportation. Currently, PVR owns approximately 249,000 acres of forest land, which are located mostly on the properties which contain its coal reserves.

The company also owns royalty interests in approximately 6.4 billion of cubic feet of proven oil and gas reserves in the states of Kentucky, Tennessee, Virginia and West Virginia.

Branching Out
Currently, PVR Partners is implementing its expansion plan. Casaday says PVR has set its sights on the Utica Shale in eastern Ohio. “We’re broadening our growth by levering our success in the Marcellus to the same customers in the Utica,” he adds.

The company also has moved into water services via a joint venture with Aqua Infrastructure LLC, a subsidiary of Aqua America Inc. “We’re trying to take that model of a full service, fully integrated approach to provide fresh water to well pads for fracking directly to impoundments,” he says.

PVR has provided water services for more than a year utilizing a freshwater intake on the Susquehanna River. He adds that PVR is open to more partnerships in the future. “If it makes geographical sense and if the combination [with] a joint venture partner makes us stronger as a whole, why would we not do it?” he asks.

Success in the Business
A longtime veteran of the natural gas industry, Casaday is both a petroleum gas and natural gas engineer and accountant. “I started in the utility business,” Casaday recalls, noting that he previously operated three firms that specialized gas gathering and processing, and propane.

Casaday praises his team that has been assembled at PVR. “Collectively as an organization, we perform fantastically,” he says. “It’s the combination of all of us that makes PVR such a strong and competitive, midstream gas-pipeline company.”

He predicts continued success. “I see continued growth in the Marcellus Shale, and I see us expanding our footprint in the Utica Shale,” Casaday says, adding PVR hopes to expand its presence in Oklahoma and Texas.