Back to Profile Gallery > QASP

Pakistan has been known for suffering from regular energy crises that have hampered the country’s economic development for years on end. Approved in 2014, the Pakistan Vision 2025 is a document designed to put an end to these energy issues. It was prepared by the Planning Commission under the Ministry of Planning, Development and Reforms, and is seen as the roadmap to a prosperous Pakistan. Vision 2025 is built on seven pillars that represent the key areas in which the country needs to seek improvement, in order to increase its economic strength and emerge as a regional force in Asia.

Pillar IV is the one where the plans for the development of reliable, clean, and costeffective availability of energy, water, and food are outlined. Vision 2025 has identified the historical shortcomings of Pakistan in these sectors, noting that every year the country loses between four and six per cent of its GDP due to energy crises, in particular. In order to tackle the challenges, the Pakistani government has set out to find investment for a number of projects that are expected to bolster the state economy to unseen levels.

One of the ventures that has bolstered Vision 2025, is the formation of Quaid-e-Azam Solar Power Ltd (QASP). A public sector, forprofit company, QASP Ltd was established by the Government of 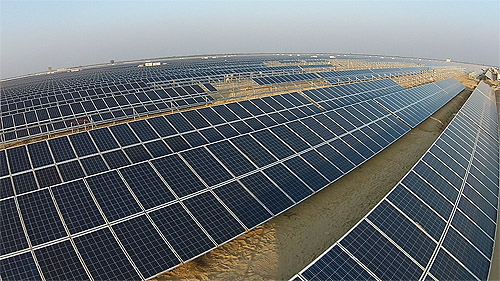 Punjab, one of the four provincial governments in the country. Its mission encompasses the setting up of various renewable energy projects, in general, and solar energy projects, in particular. The construction of the photovoltaic power station, under the name of Quaid-e-Azam Solar Park, is the company’s largest undertaking so far. The solar park is named in honour of the founder of Pakistan, Muhammad Ali Jinnah, who is revered in the country as Quaid-e-Azam, or ‘Great Leader’. Jinnah was the first Governor-General of Pakistan after it was decided that it will be a single state, disunited from India, in 1947. Having left a lasting legacy, he is still considered the greatest leader Pakistan has ever had, so it is no surprise that his name is used to inspire future bold developments across the country.

Located in the Cholistan Desert, near Bahawalpur, Punjab, the solar park spreads over 200 hectares of desert, and is densely mottled by approximately 400,000 solar panels. With the first of its three phases completed within a record time of three months, between November 2014 and January 2015, the project is now drawing to an end, being in its final stage that will see the planned final 600 MW capacity installed in the power station in 2018. Upon completion, the power station will be the largest of its kind in the world with a capacity to generate 1000 MW. The first 100 MW solar farm was built by Tebian Electric Apparatus, a subsidiary of the Chinese company Xinjiang SunOasis, and the remaining 900 MW was commissioned to another Chinese conglomerate, Zonergy.

The solar energy project at QASP is part of the China-Pakistan Economic Corridor (CPEC), which is a collection of infrastructure projects that are currently under construction throughout Pakistan. Although talks for potential close collaboration between the two countries had been reported to have taken place since the late 1950s, it was only in 2013 that the current form of CPEC was proposed. Two years later, on 20 April 2015, Pakistan and China signed the agreement that marked the commencement of the partnership, whose aim is to thoroughly modernise Pakistani infrastructure, and rapidly accelerate its economy via the creation of a network of highways and railways, the development of Gwadar port, as well as several energy projects, aside from QASP. CPEC is seen as part of China’s ‘new silk road’, linking the port at Gwadar in southern Pakistan with Kashgar, in the region of Xinjiang, in western China.

To put the overwhelming scale of the Quaide- Azam Solar Park project into perspective, it is worth mentioning that Pakistan has invested approximately $150 million (equity + debt) for the construction of the park, which is the largest investment the country has ever made in the renewable energy sector. It seems that Pakistan has firmly taken the road to securing its future as a country that diversifies its energy sources, thus ensuring that no more energy crises will hinder its progress. In fact, Pakistan has stated its aim to produce 25 per cent of its electricity requirements by renewable energy sources by 2030. It signifies a telling shift from the energy mix the country has been used to. Pakistan’s current energy mix includes 62 per cent thermal, 32 per cent hydel, 37 per cent nuclear and others 1.8 per cent, as per the report of sustainable development policy institute Pakistan Energy vision 2035. The calls for the introduction of clean energy as a means to battle climate changes, has not gone past Pakistan in any way. Once the solar park (1000mw) is completed, the country will be able to reduce its carbon emissions by 907,500 short tons per year, which is clearly a step in the right direction, given that its emissions reach up to 192.74 million tons as per recent research at the moment.

It appears that Pakistan is on its way to modernisation that will improve the outlook for the country in the years to come. The Quaid-e-Azam Solar Park project is just one of the jigsaw pieces that is about time to fall into place. It remains to be seen what the impact of the other large-scale projects will be for Pakistan, but as it stands now, there are plenty of reasons for optimism.