Back to Profile Gallery > RAG

Founded in 1935, RAG is an Austrian energy company, active in E&P of oil and natural gas, transport and storage of natural gas and in the trading gas to its customers throughout Europe.

It is also involved in geothermal and biogas energy projects. Furthermore, RAG works in E&P outside of its home market, in Germany, Poland, Hungary and Ukraine.

The company also operates its own drilling rigs, which are responsible for drilling almost 50,000 metres per year. RAG is responsible for having drilled more than 800 wells in Austria and so far 15 wells outside Austria. Since its foundation more than 75 years ago, RAG has produced a total of 14.7 million tonnes of crude oil and 23.8 billion standard cubic metres (scm) of natural gas. Today, the company operates 86 oil wells and 117 gas production wells across the country.

CEO of RAG, Markus Mitteregger, elaborates upon some of the key strengths of his company: “We utilise a modular technology in order to produce these small reservoirs, which means we aren’t limiting ourselves by focusing on permanent installations. Instead, we can re-use them on different locations. In addition, we also benefit from an excellent workforce of highly skilled and technically proficient personnel.”

The company’s ongoing developments in the field of gas storage have allowed it to work alongside some of Europe’s leading energy companies, as Markus explains: “In recent times, we have initiated various joint ventures with the likes of Gazprom, Wingas and E.ON Ruhrgas, where we work as technical operator. Besides that we are also very active as a storage system operator (SSO). Storage in Austria accounts for more than 60 per cent of our business activities today.”

This comes despite the fact that Austria’s natural energy resources are relatively limited, with just ten per cent of the country’s oil and 15 per cent of its gas supply being produced locally. Markus highlights how this affects his company’s activities: “Whilst we realise there is a not a huge amount of potential in terms of volumes, we are continually working to adapt our tools to get the most out of what we have. Use of 3D technology plays a vital part and has helped us work these smaller fields, whilst keeping our production costs low.”

RAG’s operations outside of Austria also compensate for the low levels of resources in the home market, according to Markus: “There is certainly a lot of potential left in the smaller Bavarian fields – and the same is true for Hungary. We are also heavily involved in a shale gas project in Poland with an Italian company and an American operator called BNK. By the end of this year we expect to commence drilling there – which is something we are all very excited about. And then of course, there is also Ukraine, where we shall look to strengthen our position once the crisis has abated.” 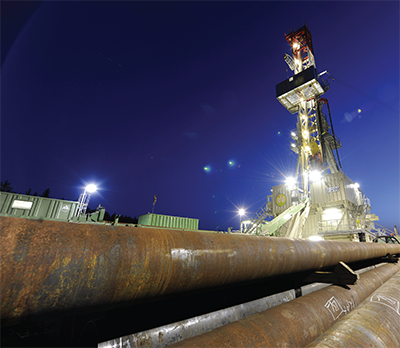 Markus also believes that the company’s decision to hold on to its rigs during the 1990s, at a time when many others in the market were selling them, has proven successful. He reveals: “At the time, our competitors in the market were selling their rigs on to service companies. We, on the other hand, saw drilling as a fundamental means to further strengthen our E&P business, and so we chose to keep ours. This has been extremely useful in attracting customers, to maintain expertise, and keep costs low for E&P and storage projects.”

Of all its business segments, gas storage has fast become the most prominent. Markus gives an insight into why this has been the case: “During the 1980s, we decided to balance our production by complimenting it with gas storage services. Our commercial storage operation started in mid 90s and really took off in the early 2000s with the development of a large facility called Haidach. This is a massive project that is currently entering its final stages and, when finalised, will consist of two separate wells with a total storage of 2.4 billion cubic metres (bcm).”

This is not the only large-scale gas storage operation that RAG is working on, with another recent joint venture including an underground gas storage facility with E.ON called 7Fields. The Austrian company’s role here is as planner, constructor and technical operator, and the first stage of the project commenced in 2009 is scheduled for completion in 2011. When finished, 7Fields will store more than two bcm of natural gas for the German and international markets.

Markus explains: “This project is essentially a combination of seven different fields and four individual stations, all brought together as one comprehensive facility. Although it is based in Austria, the site’s proximity to the German border makes it ideal for the German market, and so it is all connected to the country’s and central Europe’s main energy grid.”

The future of RAG’s operations will continue to focus upon this aspect of the business, according to Markus: “It is vital to our strategy that we continue to operate our storage facilities in Austria, look for opportunities abroad and focus on developing our foreign concessions. Once we have secured this, we can then plot our next step in the expansion of the company. Our aim is to achieve a steady, measured growth, and I believe we are currently on the right path do to so”.

“Whilst there are obvious issues that plague the industry – whether related to the financial crisis or the ongoing skills shortage, I firmly expect our company to remain successful for many years to come. It will simply be a matter of following the strategy that has already served us so well.”