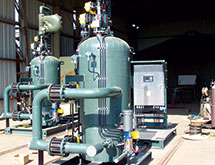 Ramsgate Engineering, based in Bakersfield, Calif., is owned by five industry veterans who all got their start with the Getty Oil Company before venturing in different directions. In 2006, Don Nelson, Eric Berger, Frank Lawrence, Mike Houghton and Danny Henderson joined up to form Ramsgate Engineering, Inc. The company is comprised of engineers, geologists, project managers, designers, technicians and support staff focused on the engineering, design, procurement, management and operations of heavy oil development and enhanced thermal technology projects.

“Bakersfield is one of the towns where the technology for heavy oil development was pioneered, and so the five of us have been involved in heavy oil our entire careers,” says Nelson, who is president.

“The two companies really complement each other because in the heavy oil industry there is no other company that you can go to that does entire projects from design to manufacturing equipment, to building it, commissioning it and running it,” Nelson says.

“Typically to get that kind of service they have to go to many companies,” he adds.” Our niche is that we’re a one-stop shop and it has really led to our success in working with other countries.”

Spreading Around
The heavy oil industry in Bakersfield has been around for quite some time, but other countries, specifically those in the Middle East and South America, are just beginning to embark on heavy oil development. In fact, Ramsgate has often been the lead engineering company on a country’s first heavy oil development.

“In Bahrain, for instance, we developed their first steam project in 2010,” Nelson says. “We also did three different steam pilot plant projects at three different fields in Oman. They were so happy with the pilot projects that we did a larger plant for them and also manufactured their steam generators and well testers. This client had 10 engineers come from Oman for a year-and-a-half to learn from us.”

Other Middle Eastern countries Ramsgate has worked with include Kuwait and Egypt. It also has worked in Argentina, Brazil, Columbia, Venezuela, Indonesia, Madagascar and Albania, Netherlands and Mexico. Today, the company is seeing South America’s heavy oil development emerge rapidly.

“We are working on a project in Brazil to build steam generators, and Colombia has requested engineers to come there once a month to help define a project, so it looks like we’re going to be doing large projects in South America in the near future,” Nelson says.

“It definitely looks like the heavy oil industry will continue to expand and I expect that Ramsgate will be in the middle of it.”

Each country Ramsgate enters will benefit from the company’s extensive knowledge of best practices and industry trends. “We’ve really optimized the controls on our equipment, such as steam generators, to control the emissions,” Nelson says. “In prior decades, the process designs were not capable of meeting tight emissions and the steam generators emitted considerable pollution. Now, the Ramsgate proprietary design sets new standards for performance, reliability and efficiency.”

Ramsgate takes these insights and uses them in the unique designs requested by its clients. Not only is the company a one-stop shop, but it’s also a build-to-order operation that can design, build and operate a project from scratch. “We are a true solutions provider, not just a job shop,” he says. “We are very specific to what types of projects we do and are very good at helping our clients get the solution that’s correct for them.”