Back to Profile Gallery > Reach Subsea

Since the company was established in 2008, Reach Subsea ASA has established a proven track record in the provision of world-class engineering as well as inspection, maintenance and repair services (IMR); survey; construction support; decommissioning; and remotely-operated underwater vessel (ROV) services. Based in Haugesund, Norway the company is highly regarded as a knowledgeable offshore operator capable of providing engineering services to the oil industry in a flexible and competitive way. In all of its actions, it is the vision of Reach Subsea to be the preferred operator to clients that require the ‘best subsea partner that will always perform above expectations.’

Presently Reach Subsea maintains a fleet of five modern and highly specialised offshore support vessels, comprised of six WROVs and one high speed survey ROV. The combined competences of its fleet of vessels and ROVs allows the company to act as a complete subsea service provider, through the delivery of advanced solutions to technologically demanding customers that require in-depth engineering and equipment relating to subsea operations.

The latest addition to the Reach Subsea fleet is the ROV Surveyor Interceptor, which successfully completed her first commercial job for Gassco inspecting the Knarr gas pipeline during March 2015. The client was highly appreciative in its praise of the vessel’s performance, describing it as a ‘completely new subsea technology.’ Surveyor Interceptor is a new and innovative survey ROV (SROV) owned and developed in a joint venture between Reach Subsea and the respected survey provider, MMT Sweden. The ROV was also developed in conjunction with KYSTDESIGN – the supplier of turnkey deliveries of complex systems as work class ROV and remotely operated tool (ROT) units. The vessel formally completed successful sea trials during February 2014 while operating from the Reach Subsea vessel Edda Fonn and the final results of the test far exceeded expectations. Over the course of sea trials with the new SROV 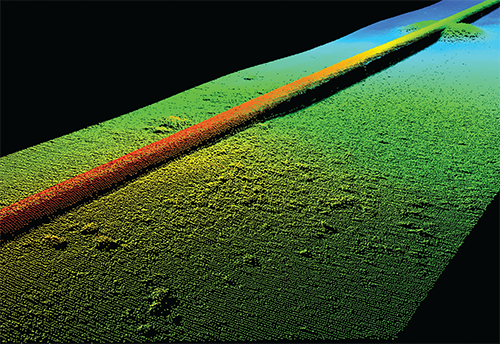 background data was collected relating to its specialised handling system to test speed, manoeuvrability, stability, cable drag as well as data quality and density. The results demonstrated that the SROV was able to reach the design speed of eight knots. The vehicle produces high-density data at six knots as well as at four knots when operating close to pipe and as a survey platform the vessel is extremely stable, delivering multibeam data with less than 0.4 per cent noise. Commenting on the success of the Surveyor Interceptor throughout the trials Reach Subsea CEO, Jostein Alendal says: “This is a break-through method when it comes to survey within oil and gas as well as the renewable market. It is cost-efficient compared to existing technology and opens new doors when it comes to other preventive surveys. The data quality and density exceeds anything I have seen before.”

Further to the successful development and deployment of the Surveyor Interceptor, Reach Subsea has also enjoyed positive progress through the business in recent months. During October 2014 for example, the company announced that it had received a letter of award (LOA) for a NOK 60-70 million contract to be executed during 2015. Later in November 2014, it was revealed that the LOA related to the announcement that Eidesvik Offshore and Reach Subsea had in partnership entered into a firm contract with Technip in Norway. Reach Subsea will execute the contact using Eidesvik Offshore’s state-of-the-art newbuild TBN Viking Neptun offshore construction vessel. The ship will be equipped with Reach ROVs and manned by Eidesvik marine personnel and Reach ROV personnel and engineers. “We are pleased to see that the collaboration agreement with Eidesvik has already resulted in contract awards,” Jostein says. “This is a testament to our ambition of finding solutions for our clients combining the right assets, the right equipment, and all engineered together by our highly competent staff.”

During March 2015 in the wake of thesuccessful deployment of Surveyor Interceptor from the Edda Fonn, Reach Subsea was alsoable to report that the vessel had again enteredinto a contract for an international client to undertake operations in the Mediterranean Sea. These began during April 2015 for a firm period of 120 days, with options for a further 60 days as required. Discussing the continued success of the Edda Fonn and the contract’s significance for Reach Subsea in the Mediterranean, Jostein commented: “We are satisfied with the contract award, that will improve the utilisation of the vessel for 2015 and gives us further opportunities in the region.”

With the execution of several high profile and highly acclaimed projects andthe implementation of leading-edge ROVtechnology, 2015 has proven to be an exciting period for Reach Subsea. As the companyprepares to undertake future with clients oldand new across the globe it will continue to move forward while implementing its strongbelief in the systematic implementation of HSE measures evolving from early project risk assessment and continuous risk assessment processes. In conjunction with is full accordance with industry HSEQ Achilles and ISO-9001 standards, this process will enable Reach Subsea to continue to provide the highest levels of service wherever the most challenging and technically demanding subsea solutions are required.