Back to Profile Gallery > Reef Subsea

Reef Subsea was established in 2010 by HitecVision and GC Rieber Shipping.

On 28th January 2014, the company announced an ownership change with HitecVision taking 100 per cent control of the business that consists of two companies, Reef Subsea Integrated Projects (RSIP), and Reef Subsea Dredging and Excavation.

Introducing the fleet, managing director Arne Bengt Riple begins: “We have four ships in our fleet, two of which are through an agreement with GC Rieber, which remains in place following the change in ownership.” The fleet consists of the Polar Prince and Polar King, and two Reef Subsea vessels, the Reef Despina and Reef Larissa, performing cable laying, Inspection, Maintenance and Repair (IMR) services and light construction. “Our vessels are currently working in operations utilising both towing and trenching capacity,” he continues.

Geographically the company’s interests lay in the North Sea, particularly the UK and Norwegian sectors and North Europe, with a windfarm project off the coast of Wales. Additionally the company has established itself in the West of Africa focused on light construction and ROV support. “The Polar Prince and Polar King are both working on the Gwynt y Môr project on behalf of RWE. Both vessels are quite different in their operations. The Polar Prince has the capacity to pull the plough and lay the cable, and using the Polar King we are able to pick up the ends of the cables, making the connection to the windfarm,” says Arne.

The business also operates the Reef Despina, a slightly smaller vessel than the Polar range. Having operated in Africa for the past year, it is due to commence operations on behalf of HESS Limited, under a decommissioning project on the Angus Pipeline PL1857 Flushing project. The operation will take place in the Fife, Fergus, Flora and Angus (FFFA) fields, located in the central North Sea in water depths of 70 metres. As part of the decommissioning programme, RSIP will perform the removal of the pipeline contents with ROV assistance. It will deliver a filtration package, suction pump and associated down lines to evacuate pipeline contents to the vessel. RSIP will engineer and manage the project using its multi-skilled team.

“We are undertaking the project with one ship utilising our personnel for the decommissioning and structural removal. On completion of the project for HESS we will undertake a multi- 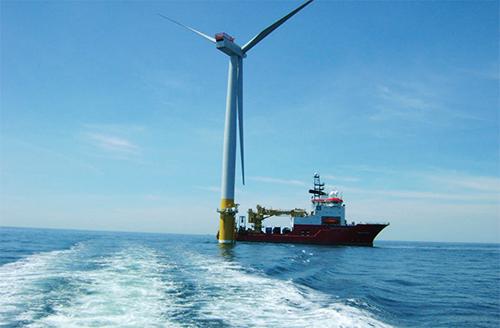 million pound contract with Technip Norge AS for trenching services on the Bøyla Development Project in the North Sea, highlighting our ability to undertake two quite different types of jobs utilising the same type of vessel,” Arne announces.

RSIP will provide the state-of-the-art Q1000 jet trencher, along with a team of experienced operators, to conduct trenching services in the project located 225 kilometres west of Stavanger, Norway, at a water depth of 120 metres. RSIP will also provide associated engineering procedures and onshore and offshore project management whilst its fourth vessel, Reef Larissa, is currently in the West of Africa under ongoing support vessel contracts.

One of the most significant milestones in the recent period is drawing to the completion of the RWE Gwynt y Môr project. The success of the business is attributed to a number of factors as Arne comments: “We have a very qualified team both on and offshore. We are focused on the quality and the high technological side of operations, working closely with professional ship management companies allowing us to focus on project performance. Engineering and the project performance are important aspects that ensure return business. The mix of people and the right fleet gives us an edge that allows us to perform tasks, enabling us to establish good relationships with several customers.”

The combination of internal and external training has supported the business in its growth and by attracting qualified personnel it has been able to grow with speed. “We are expanding our focus from hiring experienced engineers to the introduction of an apprentice programme for newly educated engineers and we are looking to prime the right candidates from universities in 2014. We have over many years been training ROV personnel or offshore crews to our high standards and this training will remain,” explains Arne.

Moving forward into 2014 focus is continued on cable laying in both the offshore windfarm market as well as the oil and gas market. “We have the capacity and knowledge that places us in a perfect position to develop our business. We aim to establish ourselves more permanently with resources in the West of Africa. We are expecting to see an increase of work in the North Sea, following recent investments.

“Our vision is to grow our business, particularly in the service market. Over the next five years we will be increasing our market share working in close co-operation with both tier one suppliers as well as operators, utilising more vessels. In April 2014 we are going to have all four vessels in operation as well as using two other vessels on shorter charter hire. It is a very busy period and following the change in ownership structure we are looking forward to strengthening our growth strategy,” Arne concludes.

Reef Subsea
Services: Subsea construction and IMR, installation and trenching of cables and umbilicals, seabed dredging and excavation, and ROV and survey services