Back to Profile Gallery > Reelwell AS

“In the last two years the company has been in a commercialisation phase promoting the Reelwell Drilling Method to the Industry.

In Q4, 2010 the technology was trialled by Shell Canada in British Columbia in a shale gas well,” begins Ove Hole, sales and marketing manager of Reelwell. “During the drilling operation we gained valuable hands-on experience with our equipment both from a performance and handling point of view. Based on what we learned during the field operation we have upgraded our equipment to increase equipment robustness and improve operability.”

Facilitating applying hydraulic Weight On Bit (WOB) by using a piston as an integrated part of the drill string, the RDM enables drilling longer section to reach longer or to reduce the number of casing strings: “There are several benefits that clients can gain from using the RDM,” Ove continues. “For example, RDM offers the advantage of a cutting free annulus at all times due to the system’s Dual Drill String, where the return drilling fluid flows inside the string. The cuttings virtually are removed from the well bore above the bottom hole assembly seconds after it has been cut loose from the formation.

“Another advantage of the RDM is that it provides the operator with accurate bottom hole pressure control. This allows a user to navigate in areas of narrow pressure window (pore/fracture pressure), which offers the possibility of extended well sections and safer managed pressure operations. The response in the industry to Reelwell’s Drilling Method has been particularly positive, with the company winning the OTC Spotlight Award three years in a row. The first awards were received for the Drilling Method and the Reelwell Telemetry System, the 2011 Spotlight Award came in recognition of the Reelwell Multi Gradient System (RMGS). By means of a fluid partition unit, RMGS can use two or more fluid densities in the well bore while drilling, facilitating the use of a heavy, passive fluid in the process rather than a light, active fluid. 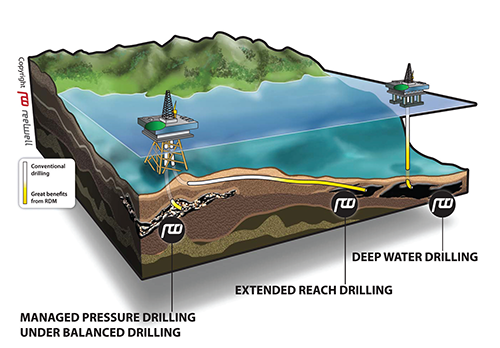 “Receiving recognition like the OTC Spotlight Awards is very important to Reelwell, because it shows that industry experts support and appreciate Reelwell’s technology. It also provides proof that this technology is offering new capabilities that had previously either been impossible to achieve or just hadn’t been considered. This shows just how significant an impact this kind of technology can have on the oil and gas industry as a whole,” Ove enthuses.

With the industry becoming more and more aware of Reelwell’s capabilities and the advancements being made with its in-house technologies, the company is understandably now taking a more active approach to pitching itself to key players operating in some of the fastest developing regions in the world: “Shell, being one of the key sponsors for the development of RDM since 2005, is acting as a key player for us in order to get the technology fully commercialised for opportunities in both Northern America and the North Sea area. However, we are also working closely with several other companies with operations based in the Middle East,” Ove explains.

“One of the companies that Reelwell is in dialogue with is Saudi Aramco, which first became familiar with Reelwell, the RDM and the various valuable features back in 2008. Since then, Saudi Aramco has closely followed the progress made by the company in developing the solutions for extended hole sections and clean well annulus. As the company continues to undertake research into new applications for the technology, one in particular is becoming a source of great optimism for Ove and his team: “At this moment in time the company is running a joint industry DEMO 2000 project with an overall objective of extending ERD limits to 20 km+.” Supported by the Norwegian Research Council, Shell, Petrobras and Total, the interest in this project comes from the very valuable potential of increasing the drainage area from platform location.

“In parallel with this we are planning an extensive study project for applying the RDM technology on Mobile Offshore Drilling Units, the main objectives being
extending water depth capability to 4000 m+ and improving overall subsea well recovery by the introduction of lighter rigs and subsea production system.

“Having positioned ourselves as a company at the cutting edge of drilling methods and technologies, the plan is to bring the RDM with the built in features to the attention of the companies that will benefit from applying the new technology in different areas Reelwell’s technologies can play a very important role in helping companies achieve their well design goals,” Ove says, before going on to detail how he hopes the company will grow.

“In the short-term it will be important for the company to grow internationally, building up the equipment inventory in order to enable us to undertake parallel operations in different locations. As we gain more experience access to new markets will be opened, eventually establishing ourselves not only in the US, the Middle East and the North Sea, but also in the Far East, Eastern Europe and beyond.”