Back to Profile Gallery > Reelwell AS

Since the company was founded during 2004, Reelwell AS has dedicated over a decade to the development and promotion of its pioneering Reelwell Drilling Method (RDM). Reelwell operates from its base within Stavanger, Norway from where it unveiled its RDM technology introducing new concepts that challenge traditional methods of Managed Pressure Drilling (MPD) and Extended Reach Drilling (ERD). RDM employs revolutionary technology that utilises accurate pressure management and superior well control through the use of closed loop fluid circulation to push the limits of what was previously thought possible by the wider drilling industry. The application of RDM technology allows operators to access reservoirs that are considered to be extremely challenging or 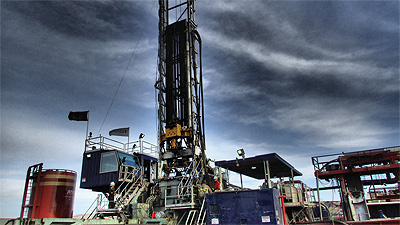 even impossible to drill conventionally, as well as to increase the overall efficiency of drilling operations.

The technology employed by the RDM is based on the use of a Dual Drill String (DDS) in which drilling fluid flows to the drill bit via the string annulus, while the return flow of liquid to the surface is through an inner string. This process is achieved through the use of Top Drive Adapter (TDA), a dual conduit swivel that allows rotation of the drill string with the top drive. The TDA also routes drilling fluid from the top drive to the DDS annulus before the return flow is taken out via the TDA housing.

Since Reelwell was previously featured in Energy, Oil & Gas magazine during October 2015, the company has continued to develop its RDM technology through the introduction of a new ERD solution that incorporates an aluminium dual drill pipe to counteract high torque and drag. “The special equipment that we have developed and proven through successful operations features a new drill string partly made of aluminium and that has the benefit of being very resistant to high torque that can cause wear and damage to components. We are also able to make the string buoyant so that the torque and drag in the horizontal drill section is greatly reduced, which is one of the main challenges with both horizontal and extended reach drilling,” explains Chief Technical Officer, Ola Vestavik. “This is possible since our solution allows the use of two different drilling fluids within the well at the same time. This enables improved wellbore stability due to stable pressure in the well during the drilling process and torque and drag reduction due to the buoyant pipe.”

The RDM Inner Pipe Valve (IPV) features a barrier for controlled pressure drilling and enables pressure-less pipe connections. The RDM is regulated through the Flow Control Unit (FCU), a control valve arrangement through which all active drill fluid is routed. The FCU assures constant downhole pressure during drilling and pipeline connection, and the unit is equipped with pressure and flow sensors on both the drilling fluid inlet and return lines. Furthermore the Reelwell control panel is fully integrated with the well control and monitoring system of the drilling facility. The result of the process is that drilling fluid is pumped into the DDS annulus via the TDA and down to the IPV at the top of a conventional Bottom Hole Assembly (BHA). From the IPV, cuttings are transported back to the surface inside the inner string, ensuring that the hole remains clean at all times.

During March 2016, Reelwell announced the successful completion of trial well operations at the Killam land well in Alberta, Canada. Prior to being deployed in the field, the Ensign 127 rig was adapted and tested with the Reelwell equipment at a site in Nisku. The spud of the Killam land well in Alberta was performed on February 27, drilling a 20” vertical hole to 90 m and installing and 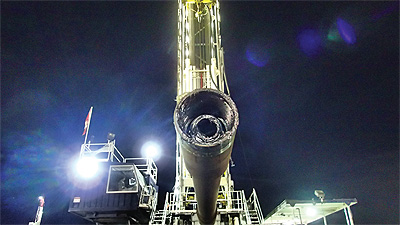 cementing a 16” casing. The Reelwell Drilling Method was deployed, using the Halliburton Geopilot Rotary Steerable System to drill the first part of the horizontal section to 1100m using the single fluid with a density of 1.1 sg. The well annulus fluid in the casing was displaced to a heavy fluid of density 1.6 sg. The Reelwell Heavy Over Light (HOL) solution was used to continue drilling down to the target depth of 1510 m MD, 452 m TVD. The effect of HOL on torque and drag was measured by comparing torque and drag when the drill string was filled with respectively light and heavy fluid in both channels when the bit was at T.

The project was undertaken with support from Total, DEA, Petrobras, Halliburton and the Research Council of Norway and was concluded positively. The results including no lost time incidents, reduction of the MPD casing pressure from 25 bar to 3 bar, superior hole cleaning and significant reduction of torque on the drill string, as predicted by the models. “We have been working hard on this technology for the past ten years now and we have done a lot of trialling and we have performed operations that have allowed us to adapt and further develop the technology. That takes time because there is a lot of testing required. We are grateful to our sponsors for the funds that has allowed us to demonstrate everything we wanted to demonstrate in terms of time and scope and can show that our equipment will work perfectly well every time with no downtime,” Ola concludes. “One of the reasons that the oil industry is so conservative is that it cannot afford mistakes, because everything is so expensive. Now we can show that our solution is both proven and reliable and we plan to further penetrate the market and to execute operations all around the world. Our technology can make it easier to access hard to reach reserves more economically and allow operators to improve the recovery from the fields.”