Back to Profile Gallery > Rhyal Engineering

In 1998 Bob Thomson witnessed organisations selling off their workshops and operating solely from an office perspective.

Seeing an opportunity to continue offering a service that many storage tank companies were moving away from Rhyal Engineering was formed. “As a specialist storage tank and vessel contractor the main core of our business is the design, build and refurbishment of large diameter, site constructed storage tanks for the oil and gas producers both nationally and internationally,” begins Bob, managing director at the business.

Dealing mostly with the petrochem sector, the tanks range from between five metres in diameter up to over 80 metres and the company can be tasked with the design, installation or refurbishment of tanks, but additionally offers itself as a specialist pipe work and structural steelwork contractor.

Rhyal Engineering is one of the only privately owned, family run specialist tank construction companies in the UK. “We are able to offer flexibility, and are more approachable than many of our competitors. We make decisions in-house and we also have a strong focus on building relationships. Over the years we have received repeat business with clients who recognise our interest in moving their project forward, designing and structuring our supply to suit,” explains Bob.

Project manager Simon Judd adds: “Through very open and close relationships with the management of Rhyal Engineering, our clients are able to discuss their projects with us from day one. Right from the point where they are just thinking about a new concept they know that we will do our best to help them. A lot of projects that we have won have been the result of a long process of discussions. 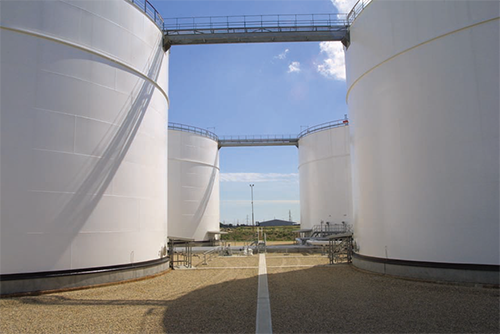 “We are currently installing additional gasoline storage in a terminal expansion project for NuStar in Grangemouth, providing them with the design and build of three large tanks, together with all associated piping, platforms and stairways. We are also working for Ineos at Grangemouth refinery, and we are also completing the refurbishment of two small tanks at the Ineos Dalston Fuel Terminal.”

The company also provides Exxon, Fawley Refinery with all of its tank maintenance through a contract that was taken over in 2010. This is for the design, supply, fabrication and refurbishment of all site tanks as a result of Exxon’s planned maintenance regime, which are mainly jack-ups, new bottoms, shell plates, wind stiffeners and roof replacements. Additional successful work at the Fawley refinery site has led to an extension of the contract to 2017.

Similar works are being completed for Phillips 66 in Bantry Bay, Southern Ireland, where the company has completed the total refurbishment of an 80 metre diameter floating roof tank in mid 2013 and is now progressing with another of the same size. This involves the replacement of the tank floor, floating roof, access stairways, platforms and ladders, together with the refurbishment of the shell plating and wind stiffeners. The company has also been performing tank refurbishment works for the Murco Refinery and SEMLogistics Fuel Terminal (Old Gulf Refinery) at Milford Haven for the past 12 years and continues to do so.

The largest tank contract completed by the company to date has been the fabrication and construction of two 160,000m³ cryogenic LNG storage tanks for Whessoe at Milford Haven. This major project took almost three years to successfully complete, and makes Rhyal Engineering the only company in the UK with recent construction experience of these large complex structures.

Operating throughout the UK, Europe and sometimes internationally, Rhyal Engineering is attracting specialist contracts designing and fabricating tank farms and installations for export. Aside from regular storage vessels, its specialist knowledge is being called upon by the LAGUNA-LBNO project consortium as it looks into the feasibility, design and installation of large cryogenic tanks situated underground.

Reviewing the market conditions Bob recalls: “We were lucky enough to have been fairly busy throughout the recession. Our busiest year to date was in 2009 with a £25 million project with BP for bioethanol implementation across four UK Terminals.” Discussing the project Simon adds: “Work became more difficult in 2010 but we managed to secure a couple of decent sized projects that kept us going. We have noticed a steady increase in work since up to the beginning of 2013, when an increased number of enquiries have been secured and once again we are exceptionally busy.”

Employing around 200 people Bob comments that at times it has been a struggle to recruit the right kind of people during busy periods. “We are in a strong position with facilities to train people, whereas many competitors sold off their workshops and are not developing the skilled operatives required, which has resulted in an overall shortage of skilled people in the industry.

“For this reason, over the last twelve years we have continued to take on four apprentices per year, both boilermaker platers and welders, who have come through our own workshops and are continually being placed into the site construction environment. Some have gone on to supervisory and senior posts within the company and we also try to bring in young engineering and management graduates wherever possible. We are also always looking to enhance our operatives skills and abilities through both tuition and training, because we recognise the benefit to both parties and the fact that we as a company can only perform as well as the people that we employ.”

Looking towards the future Simon summarises: “Our core business will always be oil and gas and petrochem, as well as the ongoing maintenance of existing assets within the UK and overseas, but also a lot more potential for additional storage in all of theseareas. We have an interest in other sectors: waste to energy, and bio fuels, the decommissioning and new nuclear work, and the renewal of coal fired power stations to bio mass burners.”

The company also recently established itself in the Middle East market with a contract to design and supply tank materials. Furthermore, with shale gas projects producing results in the US Bob added: “It’s quite buoyant out there and there is a lot of interest across many sectors. We aim to be at the forefront of all the sectors so that we are in the right place at the right time.”