Back to Profile Gallery > Rhytank AG

Originally owned by Vopak, since 2010 the terminal in Basle, Switzerland has been operated under the Rhytank name.

The company itself is the product of a 50/50 joint venture between Fluvia Holding BV and North Sea Petroleum Holding BV. With an operational capacity of 350,000 cubic metres the tank terminal is one of the larger independent shipment and transhipment facilities in Europe for the import, export and distribution of petroleum and chemical products.

The terminal itself has actually been in the market for more than 50 years having originally been built as a distribution terminal for the Swiss domestic market dealing in heating oil, diesel and gasoline. This remained a stable business case for the terminal for many decades, but over the last five years Rhytank has followed a slightly different strategy following the decline in the Swiss heating oil market. As a result, the company is now much more focused on the speciality and market niches, such as the chemical industry, jet fuel, MTBE, and ethanol oil blending where it is the only terminal in Switzerland to offer this service.

With the terminal now well established under its new ownership, Severin Plüss, managing director of Rhytank, elaborates on what has changed within the business: “Vopak originally chose to sell the terminal at Basle because it didn’t fit into its strategy as the only land-locked inland terminal in a portfolio of larger sized terminals in big port locations. In turn this created some challenges in the running of the Basle facility as we had to follow a lot of standards and procedures that were designed for major sea-going terminals and therefore not always applicable.

“As an independent terminal we can now define our requirements ourselves, which not only benefits the customers, but also our own results. Being independent on the Swiss market, and in particular in Basle, is also a key advantage as the other terminals are controlled by the oil industry. This means they are focusing the business on the particular needs of their shareholders, which gives us greater scope to capitalise on the speciality markets,” he continues.

Furthermore, Rhytank is not restricted to any given customer base and as such does business across a very broad customer portfolio, from oil majors like BP, Shell and Total to domestic refineries. Until recently this included the Petroplus refinery, which at present is no longer operational. Given that Petroplus is one of the main suppliers to the Swiss market with an approximately 25 per cent share, in the event of the refinery remaining closed this deficit will need to be reallocated elsewhere in the market. This may be met by a substantial growth in the import volumes of refined products, the major share of which Rhytank expects would be transported on the Rhine, opening up the potential for a noticeable increase in its own activity levels. 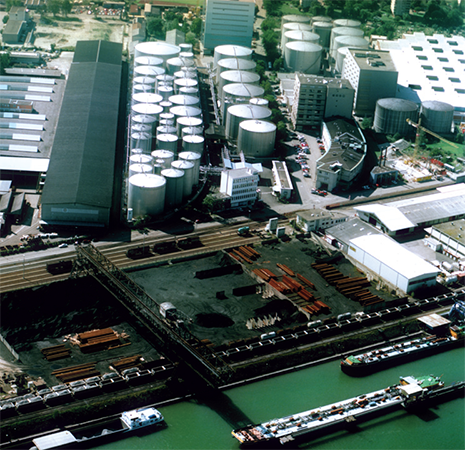 This is a situation though that Rhytank is well placed to deal with, should it occur. The business invests between one and 1.5 million Swiss francs (CHF) capital expenditure each year to keep its infrastructure at the highest standard. “In the last five years we have modernised our infrastructure with state-of-the-art equipment such as a brand new vapour recovery unit, and an automatic telemetry system for greater accuracy in monitoring the tanks. We have also invested in an expansion of our truck loading facilities, which now consists of six lines, alongside our existing five jetties and extensive rail wagon infrastructure,” highlights Severin.

He continues: “We are also looking into potential adjustments in the future, such as a move from our current two shift model to an expanded three shift system. This will enable us to increase our total capacity by about 30 per cent in the case of us exceeding our current limit.”

Being present in so many different areas of the oil market has also held the business in good stead as whilst the heating oil market is decreasing by between three to five per cent each year on the back of the growth of other energy sources, Rhytank has seen growth in the new jet fuel sector. Likewise although there is some decline in the gasoline market, this is equalised by additional consumption in diesel volumes. “Although general numbers in the market are decreasing, this has led to consolidation in the European refining industry where there is still a substantial over capacity, and the subsequent closure of several refineries over the past few years. We believe this means that the Basle region will become even more important in supplying Switzerland with refined products, and therefore the market looks promising for the local logistic cluster,” adds Severin.

Another recent development that may have a key role to play in defining part of Rhytank’s ongoing strategy has been Severin’s appointment as managing director also of shareholder business Fluvia. As an operator of inland oil and chemical tanker shipping on the European rivers Fluvia offers complimentary services to the activities of Rhytank, and with Severin overseeing both companies it is hoping to provide an added value combination of terminal services and transportation to the benefit of its customers.