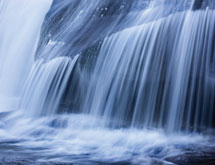 The rise in oil and natural gas prices beginning in the late 1990s encouraged the use of hydraulic fracturing (fracking) to access large areas rich in oil and gas deposits that had been, until then, too expensive to extract. While oil and gas companies focused on opening wells at a rate of 1,800 wells per year just in North Dakota’s Bakken area, others wanted to minimize the environmental effects of fracking. Ridgeline Energy Services Inc. created solutions to recycle and re-use water used for fracking, along with recycling contaminated soil to use on green landfills.

Tyler Heathcote, president and founder of Ridgeline Energy Services, says it was a client’s request that prompted the development of the company’s water recycling technology in 1999.

Ridgeline found the solution to this problem in an unlikely place – the casinos in Las Vegas. “We purchased the technology that we are using today from a fellow in Phoenix who was using the technology to treat interceptor waste from the casinos in Las Vegas,” Heathcote says. “The casino wastewater business is considerably different from the oil and gas wastewater business, but his technology worked really well, so we moved strongly towards developing it and getting it into the marketplace.”

The recycling technology uses an electro-catalytic process that works at the molecular level to separate impurities from the water. Ridgeline can recapture as much as 95 percent of the water used for fracking and is expecting to grow this number as it refines the process.

Ridgeline has operations in Calgary, California, New Mexico and Texas, and is looking to expand into the Bakken Shale. “The business is focused on recycling wastewater and providing the clients with a reusable water product so they can continually use their water, over and over,” he says. “That will decrease their cost of trucking and their cost of maintenance on equipment because water, when it’s treated, it’s much easier to handle since it’s in a better state.”

One of the biggest challenges for Ridgeline has been changing the established mindset of oil and gas companies. “For many years, people had the option of just going and getting fresh water for their activities,” he says. “It’s quite a shift in thinking.”

He sees water recycling as the only option to keep the oil and gas industry going. “With all the unconventional gas and oil exploration and the alternative gas and oil production, the amount of water that those industries use goes up every year,” he explains. “People are used to doing things a certain way. It takes time to re-educate them and let them know that there are new technologies that can provide them with ways to still maintain their profits.”

Green Landfills
Ridgeline Greenfill is an initiative Ridgeline Energy Services has undertaken to minimize the soil contamination derived from unconventional oil and gas exploration. “We’re the only company that currently offers this service in Western Canada,” Heathcote says.

Landfills use soil to cover up the garbage that is discarded. Rather than using clean soil, Ridgeline Greenfill takes soil that is contaminated by oil and gas exploration, treats it and allows municipalities to use it as covering soil.

“We go in and create a treatment platform, right on the municipality’s land, we partner with a landfill,” Heathcote explains. “We meet with [the client], we educate them on what we do and how we do it. We educate them on the benefits for the environment, for them and what we can offer to them.”

Fortunately, Heathcote finds that “the more you do, the easier the acceptance,” he says. EMI