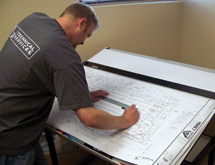 With 150 combined years of oil and gas experience, the staff of R&J Technical Services can offer its clients service backed by extensive expertise, President Ron Houskeeper says. “[We have the] ability to troubleshoot and maintain any of the electrical and technical systems of any drilling rig or gas or oil facility,” he says.

Based in Layton, Utah, R&J Technical provides 24-hour electrical and technical service for the oil and gas, industrial and commercial markets, which include clients such as Chevron, EOG, Shell and Oasis. The company also designs and builds power equipment, including power skids and generators.

He co-founded the company in 2005, after working in the electrical industry for 42 years. Houskeeper decided to go forward with R&J Technical after discussing the venture with his son, Vice President of Operations Jake Houskeeper, who had also been in the industry for six years. Shortly afterward, the father-son team brought on Connell Durham, a fellow co-worker, as a third partner and the vice president of operations, Alaska Division.

Initially, the business operated out of Ron Houskeeper’s garage, with Jake Houskeeper serving clients in Utah and Colorado and Ron and Connell servicing Wyoming. “Jake and I financed the company out of pocket for a year,” the elder Houskeeper recalls.

The two opened the company’s first building in Layton in 2008, and grew the firm’s reach to North Dakota, Wyoming, Texas and Alaska. Today, R&J Technical employs a staff of 50 and has remained a family business.

Houskeeper’s daughter, Amanda Roseburg, is CFO, and his son-in-law, Steve Buchmiller, is its North Dakota operations manager. “That’s part of why we’re willing to work the nights and weekends,” Roseburg says. “We’re dedicated.”

Houskeeper agrees, adding that the company serves its clients year-round. “Everybody comes to us [with problems] on the weekend,” he says.

One of the Strongest
A driver of the firm’s success, Houskeeper notes, has been its goal of avoiding debt.

“When we opened a shop in Wyoming, we built it with cash,” he recalls, noting that the company also did its best to avoid large expenditures.

The firm’s expertise in oil and gas exploration also helps. “As far as drilling, if we’re not the first one to call, we’re at least the second,” he says, noting that R&J Technical can provide its customers with technical and electrician crews.

The company also can provide construction crews for light industrial and commercial work, as well as employees who can work on HVAC or insulation projects. “We’re one of the strongest in the industry, especially related to the drilling contracting,” Houskeeper asserts.

Growing Out
R&J Technical is opening a new office in Texas, and has plans for further expansion. “We will take that very slowly,” Houskeeper says, explaining that he wants to keep the company focused on establishing itself in new territories.

However, “We’re looking at a couple areas right now,” he says, noting that it wants to buy property where it could open another office.