Robertson Petroleum Group may not be a giant firm, but it’s a fast-growing consulting business with expanding territories and a mushrooming portfolio.

Since its inception in 2016, the Lubbock, Texas-based company has grown by leaps and bounds. “We’ve gone from four employees to 42,” President Matthew Robertson says. “And we will continue to grow. I think we will double in the next year, both from headcount and workflow.”

Robertson Petroleum offers consulting services dedicated to the enhancement and execution of petroleum industry operations throughout the United States. The company prides itself on expertise and experience in all domestic basins that allows it to provide operators with unmatched consulting services, from the planning to post-execution phases.

“Our expertise and experience levels are higher as a whole,” Robertson says. “We don’t hire off the street. Most of our engineers are very operational and most of our operations guys are very good engineers.” 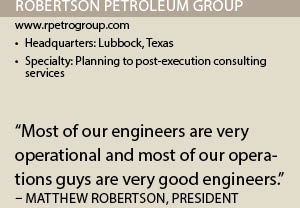 When hiring, Robertson Petroleum seeks candidates with more than 10 years experience in the industry, primarily from a fracturing service company, that worked their way from “a frac tank guy” to a service leader.

Ready For Production
Robertson Petroleum has made a name for itself as a completion group (making a well ready for production or injection). This principally involves preparing the bottom of the hole to the required specifications, running in the production tubing and its associated down hole tools as well as perforating and stimulating as required.

The firm has experienced executive consultants that serve as liaisons between the service company and operator. They are trained to follow procedures that include toe prep, hydraulic fracturing, wireline, Drillout, workover and recompletion. They also have experience with the absolute majority of fracturing service companies, sleeve/plug service companies and chemical providers.

Finally, it can supply multiple operators with regional vendor lists, conduct bidding and vendor selection. It can work with an operator to apply viable options to induce viable options for economics and manage those vendors during awarding, execution and post execution phases.

“We’ve always been considered a completion group,” Robertson says. “That’s the largest chunk of our business. But a lot of people don’t know that we offer other services.”

Drilling and Production
Robertson Petroleum also specializes in drilling and production services. Its drilling services include construction, drilling execution, drilling design and procedures and AFE preparation. It can:

The Beginning
When founding Robertson Petroleum, Matt Robertson gathered a group of consultants to create what he considered an elite force. “It was time to set up our own firm,” he says. “We were being asked by oil companies to do it. Those good relationships helped us get going.”

Prior to founding the firm, Robertson worked as a field fracturing engineer for Halliburton Energy Services. While there, he perpetuated and grew Halliburton’s technology advances in fluid chemistry, completion design, operational culture and became known as one of the leading innovators in the industry.

He served as the lead field completion engineering representative for Devon Energy, BP America and Shell. By the time he was transferred to other basins, he was leading Halliburton’s acidizing and fracturing operations throughout the Pinedale/Anticline, Wachatie and occasionally the Big Horn Basins of the State of Wyoming.

In 2005, Halliburton promoted Robertson to district technical manager of the Piceance Basin of Colorado and the Williston Basin with Halliburton. At Piceance, he redeveloped internal local systems corporately to handle major overhauls in respect to folds of work activity increase.

Halliburton then moved Robertson to Williston Basin as its lead technical manager. During his tenure with Halliburton, Robertson developed many training curriculums for incoming engineers that are still used today in many basins.

Today, Robertson Petroleum is the proud operator of its own frac school that teaches the ins-and-outs of hydraulic fracturing. “Our frac school is definitely going to become a part of our driving edge,” Robertson says. “It’s designed even for people who have been doing this for 30 years. Things change very quickly in our industry. And there are few technologies that we have not seen or don’t know about.”

“We are completely a safety-oriented organization of consultants that understand the work environment,” Robertson says. “We are compliant through ISNetworld, safety programs and the majority of our consultants hold their well control certifications.”

Aside from being members of ISNetworld, a safety services organization, the company also participates in PEC Safety certification classes. Recognized for world-class safety orientations and training, PEC has trained more than 1.3 million workers through its network of more than 2,500 authorized instructors.