The future of drilling has received a reboot with the introduction of an innovative autonomous robotic drilling rig for unmanned land, offshore and deepwater drilling operations.

The electric robots are designed to sit on any drill-floor, setting new standards in quality, safety and efficiency.

Robotic Drilling Systems (RDS) has a proud history forming from Seabed Rig A/S, a company that first began in 2005 developing a drilling rig to be submerged at the seabed for cost-effective drilling in deep waters and Arctic areas. The Stavanger based business then began to work on the robotic drill design that would change the future of drilling with implementation possible on existing and new drilling structures, both offshore and on land.

In an interview with European Oil and Gas Magazine Kenneth Søndervik, vice-president of sales and marketing, explained: “We saw that any tools developed for use 3000m below the surface on the seabed could be easily implemented on the topside.” RDS was successful in securing an information-sharing agreement with NASA, based around the technologies used on the Curiosity Mars Rover.

The agreement allowed the business to case study the Mars Rover to create an efficient autonomous robotic system based on those operated by NASA. More sophisticated than those seen in other manufacturing industries today, Kenneth says: “The software suites that we created do more than just carry out preprogrammed tasks. One big difference between an automated system and a robotic system is the latter can be re-programmed to do something else, but will still be governed by moving at preprogrammed paths. 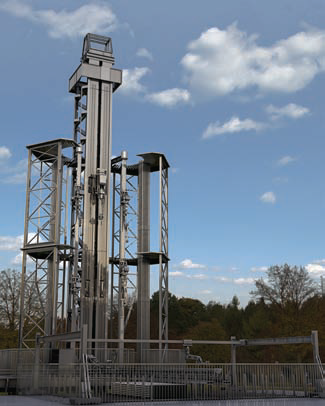 “Our system takes a different approach. Sometimes it is more efficient to move from A to C to B, and next time it’s more efficient to move from A to B, so the robots will always calculate and execute the most efficient path. The system does not require the operator to give several commands, instead the solution works on overall commands such as trip in pipe or change BHA. Since this is a fully robotized electric system we also have the ability to simulate and execute tasks using the same control system, meaning that simulated results will always correspond with reality.

“Self thinking and self preservation is incorporated into the robots themselves. As an example if one electric motor is showing more heat, the system will recognise this and close down, utilising other motors to complete the task. Our robots can carry out work performed by humans and automated machines today and importantly can be incorporated into existing infrastructure.”

Most automated operations on drilling rigs today work by mimicking human activity, such as a hydraulic arm that moves drill-pipe from setback to well centre. RDS’ approach differs from this. Why would you mimic human behaviour instead of designing the machines for most efficient machine use? RDS believes it has solved this by looking at the drill-floor as one factory floor, designing multitask robots to both reduce machines needed as well as increasing efficiency of the robots. The pipe handling robot for instance is able to pick up from a horizontal position, bring to vertical, build and move stands, handle multiple sizes and change all the tools itself to operate the different functions within the boundaries set by the existing drilling structure, resulting in aquicker, more efficient pipe handling system.

The world’s strongest fully electric robot for the oil and gas industry is capable of lifting 1500kg at three metres reach and will perform the human tasks and lifting throughout the day, picking up the smallest through to the largest products and acting as a fully robotized roughneck. “The electric system uses intelligence that can establish the weight of items and adjusts the speed of acceleration and movement in accordance with the size and weight of material that is being lifted,” says Kenneth.

“The long-term goal is to combine our technologies to create fully autonomous robotised drill floors. We firmly believe thatonce this technology is more recognised other industries will see the benefits,” he continues. Stavanger area has a history as a robotic community, but world robotics remains a niche market. Utilising the geographical position, the business has secured its place at the forefront in the development of robotic tools, attracting some of the best engineers in the industry.

Focusing ahead, Kenneth highlights: “The aim of the business during 2014 is to become much more efficient with universal tool adaptations to keep people away from the drill floor. We are also developing a fully electric roughneck, a change that we believe is important to the industry in bringing it to the levels other manufacturing industries have been working towards since the late 1970’s.

“We want these tools to be able to function problem free for years. Another benefit from running an electric system is the elimination of outside sensors on the rig floor. Our systems calculate their position by the use of the motors and all other equipment including the drivers is within the tool itself.”

The plug & play system can be taken to any drill floor, plugged into power supplies and communication cables and the system is ready to operate. The installation method surrounding the introduction of the system eases the process from very first stages through to usage and service.

“We would rather have slightly bigger sized electric motors on one tool, so we can bring in line the motor sizes on different tools, reducing the number of spare parts that need to be associated with the equipment.

“The control of the hardware is situated inside the robot itself. If it needs repairing, there is no need to repair it on the rig side, you simply take out the hardware and replace it with a new one. Once the item is sent away and repaired it can be returned and replaced in the unit. We don’t want the rig to be dependant on having all the motors in stock, and by reducing the number in use, we also reduce the number of spares required, greatly reducing the operator cost,” explains Kenneth.

The systems can be remotely controlled offsite in an offshore office, on land or a surface vessel. A simulated reality combined with a surveillance system is used for operation and visualisation of the system, and by using the same models for design and construction and in the simulator, it will be possible to run the entire system with the actual control system.

With a growing portfolio of easily adaptable equipment, RDS provides robots that operate as a deck robot, pipe handling system, roughneck, and the elevator working towards a fully automated and fully robotised process. Kenneth concludes: “Our main focus is to make processes easier, smoother, quicker and safer, and that incorporates every aspect from installing tools to repairing the tools.”