Back to Profile Gallery > RSP Permian 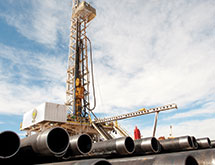 In 2010, Rising Star Energy and Pecos Production Co. saw an opportunity too good to pass up. The oil and gas production firms maintained independent operations and had previously been backed by a mutual private equity partner, Natural Gas Partners. But when the opportunity to acquire a large contiguous acreage block around Midland, Texas, arose, the two joined forces and formed RSP Permian to capitalize on the prospect.

“There was an opportunity to buy a large portion of the assets of a company in Midland by the name of Patriot Resources,” COO Zane Arrott explains. “It was a fairly large acquisition and our financial backer decided we needed a larger management team. We were well acquainted with Pecos, and so the two married and became RSP Permian and it continues that way today.”

After four years in operation as RSP Permian, the oil and natural gas company continues to focus on the acquisition, exploration, development and production of unconventional oil and associated liquids-rich natural gas reserves in the Midland Basin, a sub-basin of the Permian Basin. The operation owns more than 40,000 acres across the Wolfcamp, Spraberry and Jo Mill formations and describes its reserves as a low-risk, oil-rich base with rapid growth potential. RSP Permian has proven reserves of 53.9 million barrels of oil equivalent (65 percent oil, 19 percent natural liquid gas and 16 percent natural gas).

A Public Affair
“At the time when we started the company, the market was focused on vertical drilling only and horizontal drilling was not in focus,” Arrott explains. “That changed after a couple of years. We drilled our first horizontal well in October 2012 and after that point we realized the full value of RSP Permian couldn’t be reached without a tremendous amount of capital. So we started the process in mid-2013 and launched as a public company in January of this year.”

RSP Permian has so far raised $390 million in the public market and is using a fair amount of that capital today to fund drilling operations. The company is drilling with four horizontal rigs and two vertical rigs and maintains a net production of approximately 9,330 (or 9.3 thousand) barrels of oil equivalent per day.

On the Horizon
“The Midland Basin has all of the target horizons that you hear people talking about today,” Arrott says. “It’s stacked like pancakes with all of these different pay intervals. We’ve tested six of those so far. There are other operators in the basin that are experimenting and delineating other horizons and there are others that we could possibly drill in the future.”

RSP Permian has identified a multi-year inventory of horizontal drilling locations that it believes will provide attractive growth and return opportunities. Based on its initial horizontal drilling results and those of other operators in the area, combined with its interpretation of various geologic and engineering data, the company has identified 1,396 horizontal drilling locations on its acreage with a majority of this count based on five wells per zone drilled across either 640-acre drilling units for shorter laterals or 960-acre drilling units for longer laterals depending upon lease configuration. The ability to drill longer laterals exists across most of its acreage blocks and in multiple target zones.

As the horizontal drilling market matures, Arrott says RSP Permian has evolved its techniques and technology. “Both the drilling and completion sides have evolved,” Arrott says. “When horizontal drilling first got started, we used gelling agents and put in much higher sand concentrations. That has evolved to slickwater fracking where we use a lot more water and a lot less additives and we don’t use nearly as high of a concentration of pounds of sand per volume of water.”

RSP Permian also is refining its well spacing. The number of fracking intervals over a given length has changed over time and Arrott says the company is defining the best spacing between its wells to target the greatest amounts of reserves using the least amount of money.

RSP Permian’s continual evolution within the unconventional drilling market has proven to be one of its greatest strengths. Its experienced management and technical teams in horizontal drilling and completions reduce the execution risk associated with unconventional drilling. Also, because the company controls almost 95 percent of its acreage, it has significant control of its net position.

“We want to operate the majority of our volume because with operations you can determine your own destiny,” Arrott says. “We can set the pace of our development and can determine the technologies utilized in drilling and completion. We can make the call on when things are done and how they are done, allowing us to make the best decisions for ourselves and our stakeholders.”