Back to Profile Gallery > Rubis Terminal

The Rubis Terminal, formerly the Compagnie Parisienne des Asphaltes, was founded in 1877. The recorded storage capacity in 1992 totaled over a million cubic metres at its locations in Rouen and Dunkirk.

The seafront location and connections to the main French pipelines offered major strategic assets for business development in oil products and chemicals on the French market. The Group is an independent, international operator specialising in the downstream petroleum and chemicals sector through two subsidiary organisations; Rubis Terminal, and Rubis Energie.

Between 1995 and 2002, the Group acquired almost one million cubic metres of additional storage in France by taking over strategic terminals in Brest, Saint-Priest, and Strasbourg Pétrole and the Propetrol Company. The acquisitions raised the total storage capacity to two million cubic metres. In a period of twenty years, Rubis Terminal had successfully become the number one independent operator in France and the fifth in Europe. As Rubis Terminal, the company maintains 2.6 million cubic metres of bulk liquid storage capacity across a total of 11 sites in the Netherlands, Belgium, Turkey and in France, where it is the largest independent third party operator. With headquarters in France, in recent years it has undertaken targeted growth outside its home market. In 2007, Rubis Terminal expanded with the formation of its Rotterdam terminal and then in Antwerp, the second busiest port in Europe, in partnership with the Japanese group Mitsui in 2010.

The facility in Rotterdam in the Netherlands is a new addition to the tank storage market. The busy port is Europe’s biggest, and the third busiest in the world. Construction of the greenfield terminal began in 2007, with Rubis 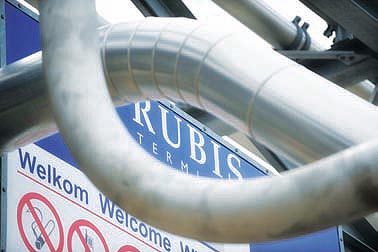 Terminal BV opening for business a year later with a storage capacity of just over 85,000 cubic metres. Since operations at the site began, its storage capacity has increased to 160,000 cubic metres, with much of this growth driven by the chemical side of the business. Implementing a development plan to substantially increase the capacity of the site to 300,000 cubic metres, phase one included the construction of a total of six tanks, consisting of four mild steel and two stainless steel tanks that are now fully operational. In preparation for phase two, the business acquired 4.5 hectares of neighbouring land, and with preparations to construct the first 14 tanks on the site, a completion date of early 2016 has been set.

As a specialist independent provider of storage and transhipment services for minerals and chemicals, its core products are chemical components and fuel oil. However, its jetty facilities and multimodal access to the site offer solutions for additional products. The relatively new terminal is equipped with state-of-the-art equipment, and with a fresh organisational approach, the business can undertake further added value services such as blending for fuel oil. The company is not the largest operator, and uses its size as a supporting angle to its customer service. With short decision lines, it is able to act quickly, delivering exactly what the client wants in a very short timeframe. Committed to being a zero-emission terminal, it is regulated by a very strict environmental permit, ensuring that processes such as vapour recovery are standard for all products. The business is heavily focused upon safety in all of its operations, continuously upgrading compliance to the very latest standards, and it is this approach that ensures Rubis Terminal remains highly regarded in the industry.

Further afield, in January 2012, the group pursued international development acquiring 50 per cent of the Delta terminal in Ceyhan, Turkey. Major investments have been planned, increasing the storage capacity to one million cubic metres, as well as designs to construct a jetty able to receive Suezmax tankers. The joint venture in Turkey was made through the secondary arm of Rubis, Rubis Energie, an LPG and petroleum product distributor with a presence across three continents, where it specialises in niche markets.

In December 2013, Rubis announced that through another subsidiary Vitogaz Switzerland, the country’s leader in LPG distribution, it was acquiring Multigas, a company specialising in the packaging and distribution of high purity ammonia and specialty gases with an additional presence in LPG cylinder distribution. With a strong reputation in this niche market, the profitable business extends and complements Rubis’ LPG business. Due to the physical-chemical properties of these gases, the marketing imposes compliance with special safety requirements and the use of logistics tools is very similar to those needed for propane and butane. The acquisition broadens Rubis’ portfolio, which could be extended to geographic areas where the Group is already in operation.

At a time of major changes in the European petrochemical sector, the strategically located terminals offer maritime access, with connections to the main networks of pipelines proving a major asset in the logistical chain for its industrial customers that wish to maintain and develop strategic models. Furthermore, ongoing investments and training programmes ensure the company continuously complies with ever-stricter regulations, providing the quality of customer service that is expected. As Rubis Terminal continues to grow in the field of chemicals and related products, it is also in a position to store niche products as required. As a demonstration of its adaptability, in 2013, the business recorded eight per cent growth across the group. The investments and plans for the immediate future demonstrate Rubis Terminal BV’s confidence in the storage markets in Europe.

Local storage support is needed by fuel and chemical businesses that service northwest Europe, and as renewable forms of energy, such as biomass liquids, replace fossil fuels the business is ready to adapt to those needs. As a relatively young market player, the experience and mindset of the wider Group has been beneficial in helping build its reputation. Moving ahead, the company continues to promote itself in the industry by the speed with which it can provide tailor-made services and specialised solutions. One of the key aspects of the business is the focus on customer service, and the drive to find the optimal solution. Although target markets and content are subject to change, the aptitude of the business remains constant, with the ambition to remain a strong player in the tank storage market, growing alongside future opportunities as they arise.